“The future was coming nearer, one relentless goose step after the next. Juliet could still remember when Hitler had seemed like a harmless clown. No one was amused now. (“The clowns are the dangerous ones,” Perry said.)”
—Kate Atkinson, Transcription 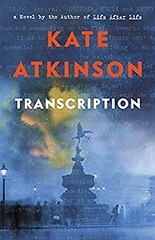 I first read about this novel on the literary website The Millions. The description intrigued me and I immediately put a copy on hold at the library.

“Transcription” is a historical novel set in London during a span of time I never tire of visiting, jumping between the lead-up to World War II and the immediate post-war years. Part of what attracted me to it is my fondness for the wartime noir novels of Alan Furst and the spy novels of John Le Carré. There are plenty of echoes in this novel: Hitler’s invasions of European countries, the evacuation of British troops from Dunkirk, the flourishing of homegrown fascism before the Blitz, the busy machinations of British intelligence. It is a serious novel about a most serious time, leavened with British wit, and parts of it read like a comic novel.

Juliet Armstrong is a memorable character, an innocent with a dry sense of humor and the capability of questioning herself, whose wartime work leads to an assignment transcribing conversations between an agent of MI5 and a group of domestic fascists who believe they’re delivering important information about British war preparations to Germany. This assignment, over time, leads to a more active, albeit casual, role as a spy herself, monitoring the comings and goings of the MI5 agent, whose other activities are suspicious at best.

The more I learned about Juliet, particularly the most memorable and dramatic incident from her year transcribing conversations recorded in an adjoining room, the more intrigued I became. I was somewhat flummoxed by a twist Atkinson introduced at the end, revealing a side of Juliet I had not anticipated, and wonder if it was necessary, if the story would have unfolded the way it did without the twist.

The bit of confusion at the end notwithstanding, “Transcription” pulled me in from the first page and didn’t let me go until I finished the acknowledgements at the end. 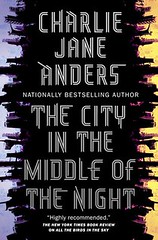 Few reviewers classify this science fiction novel as “young adult,” which surprises me. It feels solidly YA to me: the primary human characters are teenagers (and possibly some of the Gelet, though it’s hard to tell with them), the bond Sophie and Bianca form in school, the themes of abandonment and finding oneself, the interesting notion of sleeping pressed up against a partner but without sex, the idealism of Sophie and Bianca (and later of Alyssa and Mouth) … all this set against the backdrop of human colonists on tidally-locked January, a planet with a narrow habitable zone in the ring between eternal daylight and eternal night. Good stuff, and a rousing story to boot.

Yes, it’s a short review, but I don’t want to give anything away. Well, okay, a little: Anders drops hints that the colonists’ mothership is still in orbit, possibly still manned. The humans on the surface have been there for generations and have forgotten much of the technology that got them to January. “Meteors” containing machinery and forgotten bits of technology are occasionally still found by cargo cult scavengers. Foodstuffs and native animals have old Earth names, but when Sophie sits down to eat a pheasant and has to cut the poisonous spines off first, you realize things are different on January.

And then there are the widely-divergent societies of the cities around the ring, and the fascinating civilization of January’s native inhabitants, the Gelet, known only to a few human characters (but not for long).

All these things I said I wouldn’t talk about are sequel-grist. Obviously I don’t know if Charlie Jane Anders plans to write one, but if she does I’ll read it. 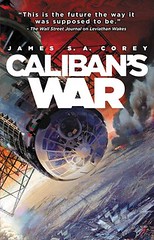 From my review of the first book of the Expanse series, “Leviathan Wakes”:

“I must say, I thoroughly enjoyed this example of good old-fashioned space opera. It’s set in a distant enough future that mankind has spread through the solar system, inhabiting the Moon, several asteroids, Mars and its moons, and some of the moons of the gas giant planets. There are three major political alliances, all at odds with each other: the Earth and Moon, the Belters, and the Outer Planets (led by Mars). Although Mars is being terraformed, it is centuries away from being able to sustain human life on its own, and of course inhabitants of the Belt and various moons depend on constant resupply to stay alive. The story itself is quite dramatic, involving the discovery of a hostile alien life-form capable of wiping out — or drastically changing the very cellular structure of — humanity, and a growing war between the three alliances. One plucky space freighter crew is at the center of the action, and they will remind you of the crew of the Nostromo in Ridley Scott’s seminal movie, Alien. Need I say more? The story will grab you by the nape of the neck and pull you along.”

I started watching the television adaption (also titled “The Expanse”) a couple of years ago and am now partway through the third (and sadly last) season. Perhaps because I read the novel years before the TV series started, the connection between “Leviathan’s Wake” and TV’s “The Expanse” didn’t register, but now that I’m into the show, it hits me that “Caliban’s War” and the show’s second (and parts of the third) season are nearly identical. The correlation between the book and the TV show is one of the closest I’ve seen. Still, the book enriches the show, with additional detail and deeper dives into the characters.

“Caliban’s War” is excellent reading. It’s everything I liked about “Leviathan’s Wake,” more so now that I’ve watched the TV series. I look forward to reading the third book, “Abbadon’s Gate.” 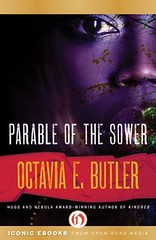 Parable of the Sower (Earthseed #1)
by Octavia E. Butler

“Parable of the Sower,” my book club selection for April 2019, is most frequently categorized by readers and reviewers as dystopian science fiction. It is, but it’s also a young adult novel. Witness:

The protagonist is a teenaged girl. The survivors who start the long trek north with her are (with one exception) likewise teens. Each of them comes of age frighteningly early, due to the collapse of the economy and society. Lauren and her Earthseed band are plucky, surviving (mostly) in the face of overwhelming odds.

“Parable of the Sower” practically defines YA dystopian SF. When I realized Octavia Butler had written it in the early 1990s (I honestly didn’t know that until I’d finished reading it), it hit me that this may be the prototypical YA dystopian SF novel, written, as it was, long before the current crop of YA dystopian SF writers came on the scene.

Octavia Butler’s depiction of a post-societal breakdown California is chilling. It is the standout reason to read the book, well thought through and with the ring of truth. Yes, you think, this is exactly how it would be. I’m willing to bet Claire Vaye Watkins, who wrote another acclaimed post-apocalyptic California novel in 2015, “Gold Fame Citrus,” is a disciple of Octavia Butler.

The teenaged Lauren’s Earthseed philosophy was nothing new to me … it’s essentially what I’ve believed since the age of 14, along with millions of others who’ve turned their backs on organized religion. Sadly, the passages where Lauren explains her beliefs to friends and potential followers are didactic and clunky … not at all like people actually talk, and the dialog falls flat.

Balancing that out, I was intrigued by Lauren’s long-term vision that humanity’s future lies among the stars, starting over on distant planets. This is the science fiction angle of the novel, and I’m tempted to read the rest of the trilogy to see just how far Octavia Butler took it. Obviously Lauren and her original band of disciples won’t live to see it, but will their descendants? And on that note I’ll point out that the Kindle edition I read contained the first two chapters of the next novel in the series, “Parable of the Talents.” 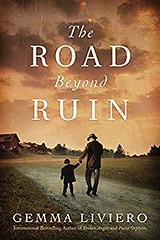 The Road Beyond Ruin
by Gemma Liviero

I was happy to download “The Road Beyond Ruin” when it was offered as a Kindle First Read: historical fiction & WWII … what’s not to like?

The early chapters were fascinating, set in the countryside near Dresden in the days and weeks immediately after Germany surrendered to the Allies; raping and pillaging Russian soldiers, displaced persons, starvation everywhere you look. Stefano intrigued me, mainly because I’ve been exposed to so little of the Italian experience of WWII, either from the fascist or resistance side, and he seemed to reflect both.

I bogged down in the middle section as the war receded and the messy love quadrangle of Erich, Rosalind, Georg, and Monique emerged. Short chapters followed individual characters, jumping back and forth in time between the beginning, middle, and end of the war, with the outlines of a highly unlikely climax beginning to take shape.

Toward the end the revelations (now including the history of Stefano) came fast and furious. When all was revealed, I simply could not believe the story … not a bit of it. Gemma Liverio asked too much of me, and I found myself flipping through the final pages just to get to the end so I could move on to another book.

A strong start, but an equally strong letdown at the end. I can’t hate it, but I can’t recommend it either. 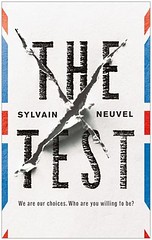 The Test
by Sylvain Neuvel

Tor sent me a copy of this just-published novella. They didn’t ask for one, but I assume they wanted a review.

I remember a science fiction story I read as a child. I can’t remember the author or the title, but it was a classic and perhaps some of you will be able to put a name to it. In the story, a man becomes increasingly suspicious that the people around him are actors and his environment a stage set. At the end, scientists in a control room terminate the sequence he’s been living and prepare to initiate a new one. I think it was the idea behind the movie “Truman,” and while I don’t know if Sylvain Neuvel ever heard of that classic story, his own tale resembles it.

The character being tested is subjected to a sequence of horrors so beyond the pale I felt like I was being subjected to one of those pointless, increasingly dire scenarios gun nuts like to lay on you. Oh yeah, well what if they broke into your house and raped your wife? And what if they made you watch? And then what if they killed your children? But raped them first? Would you shoot them then? Would you? Well what if they …. you know what I’m talking about. That’s how I felt reading “The Test.” By the end I was exhausted. Maybe that was the test. After mulling it over a few days, I’m still unsure what I was supposed to get out of it.