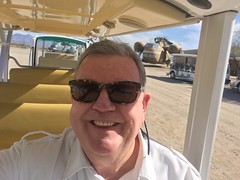 Monday last I had to haul my miserable hacking feverish runny-nosed voiceless self home from Pima Air and Space Museum after the first tram tour of the day, leaving my co-volunteers in the lurch. I made up for it yesterday with four nearly back-to-back tours, one every other hour, from the first tour of the day to the last.

Oh, I’m not firing on all cylinders yet: I had to hold the microphone off to the side for the occasional cough and blowing of the nose, but I was feeling much better (and am better yet today). If I look a little pasty in the selfie, driving an empty tram to the loading area to pick up a troop of Boy Scouts for a special tour, it’s because I’m slathered with industrial-strength sunblock.

It was a good day at the museum. The special Boy Scout tour, with a tram full of well-informed and enthusiastic young men who enjoyed my war stories, was tons of fun. Later in the day regular visitors and I got to watch restoration tow two new exhibits out into the yard and set them up on display: a French Navy Dassault Étendard IVM strike fighter and a US Navy Beechcraft TC-12 Huron transport. I’m wondering about the second designation, since the stenciling on the aircraft identifies it as a UC-12. T stands for trainer, which it is plainly not; U stands for utility, which it plainly is. That said, maybe the Navy used that particular UC-12 as a trainer. I’m not going to second-guess the museum (yes I am).

The US Air Force operates a fleet of C-12s (no T or U prefix for us), and I logged many hours of bag-dragging time on older versions in Alaska and Japan. The civilian equivalents are the Beechcraft King Air/1900-series twin-turboprop transports, very nice aircraft indeed, pressurized, comfortable, fast enough if you’re not in a pants-on-fire hurry.

We’re in a period of alternating 70- and 90-degree days. We open up the house in the morning; if it stays in the 70s we leave it open, if it starts to get hotter we close the house back up to trap the cool air inside. It won’t be long before we’re running the air conditioner 24/7.

So how about that Notre Dame? I saw a quick reference to the cathedral, but not the fire, early yesterday morning on Twitter. It stood out from the other tweets, if only because the mention of Notre Dame seemed out of left field. Internet & cell phone reception at the museum is very poor (the museum sits on the edge of coverage, and the staff won’t share its wi-fi password with visitors or volunteers), and while I was later able to learn of the fire (and the fact it was on-going and getting worse), none of the photos or videos would come through. I didn’t learn the full extent of the damage until I got home and had access again.

I dunno, it may be nihilistically fashionable to say easy come, easy go, but that particular pile of stones means something to Western civilization. Imagine embarking on a massive building project that won’t be completed for generations. Who even does that any more? Here in Tucson, a major surface street intersection with the Union Pacific railroad tracks and Interstate 10 was closed for reconstruction for two years, finally opening again yesterday evening, and that seemed like forever. What are we, here in the USA (or anywhere else for that matter), building now that won’t be completed within the lifetime of the generation that started it?

People are saying we’ve crossed a line with the Trump administration’s flouting of congressional demands for tax returns and the Mueller report. Congress is constitutionally entitled to those documents, and we’re supposed to be a nation of laws, but if the executive branch decides to ignore those laws and the legislative branch doesn’t have the courage to do anything about it, it’s all over but the Nazi salutes.

But wait. Trump ignored laws regarding fundraising and accounting for money spent on his own inauguration, and we let him get away with that. Trump ignored the law on emoluments and we let him get away with that. I could go on, but the fact is Trump’s been crossing lines from the beginning. Congress not only tolerates his autocratic behavior, it doesn’t seem the least interested in trying to check him. I’m not even sure that if there’s another large-scale terrorist attack on the US, a second 9/11, Chuck Schumer and Nancy Pelosi won’t line up to declare him King Donald the First. Know-nothing Republicans on one side, do-nothing Democrats on the other.

Well, hell. Here’s a photo of Mister B sniffing daisies out front. He’d have been a great hippie dog, that one. He cheers me up as the world burns. 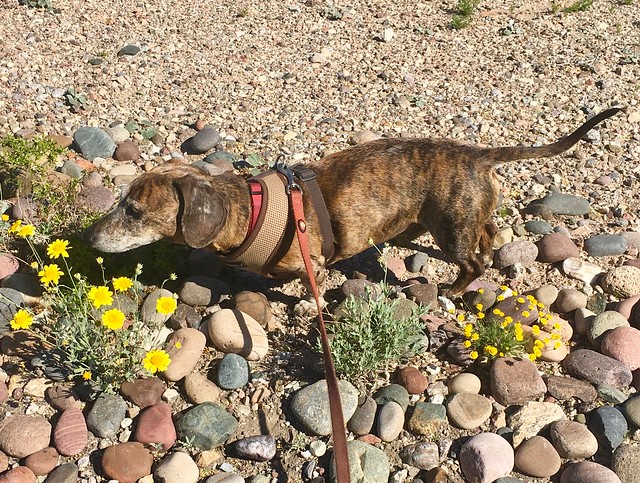