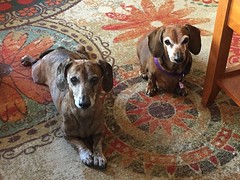 On cold nights Mr. B gets under the covers with us. He needs physical contact: one night he’ll spoon with Donna, the next with me. Our other dachshund, Maxie, hunkers down between us but wants a bit of space on either side … she’s not as touchy-feely as Mr. B and is happy just to be near.

I’m thinking about dogs this morning because two days ago a friend had to put down a beloved companion of many years. Her loss brought back our grief over losing Schatzi a couple of years ago. I gave her my condolences, then like a busybody told her how we couldn’t even consider getting another dog for a year, but once we brought Mr. B home wished we’d done it sooner. Now I wish I’d kept my mouth shut. People said the same thing to us when Schatzi died, and it didn’t help. I’m sorry, dear friend … your grief is your own, and it’s necessary, and I was insensitive to butt in with unsolicited advice.

As I came to this morning, my first thought was that not only Mr. B but Maxie too was pressed against me. I quickly realized it was Donna, trying to draw out whatever heat there was in my poor old body. I have to admit I liked it, and stayed in bed a little longer than normal.

Today’s agenda: put on some sweats, visit the gym, wash the motorcycle. The Tubac car show is Saturday, and I want a shiny bike to show off … the show’s on a golf course and the organizers let motorcyclists park on the fairway next to the cars. Our bikes, judging from the number of spectators who walk over to ogle them, are part of the show.

There’s more to do later, including drafting some comments in honor of our departed friend Rudy, whose memorial is next week in Las Vegas. We’re going to leave the dogs with a friend in Tucson Tuesday morning, then drive with our friend Mary Anne (also a dear friend of Rudy’s) to Vegas. The service is Wednesday and we’ll drive home Thursday. A wham-bam visit, but Donna heads back the first week of February and we’ll both be there in March for our grandson’s Eagle Scout induction ceremony. This time with our dogs.

I watched Kamala Harris’ interview with Rachel Maddow last night. Like Rachel, I think she’s a strong contender for the 2020 Democratic presidential nomination and could very well get it. I’m perfectly okay with her hard-line performance as a prosecutor and her history of seeking maximum sentences for those convicted of violent crimes (along with her opposition to the death penalty), and think most Americans will be too. It’s a cheap shot, but I bet those whining about her law and order background have not been the victims of violent crime.

The shutdown? I got nuthin’. And if I did, who’d listen? Careful what you wish for, yadda yadda, but I’m kind of hoping it’ll be the FAA air traffic controllers who force the issue by stopping work en masse. Even then we probably won’t do anything. We’ll put off fixing the problem until the first fatal midair, maybe even the second. My god, if we were French, we’d be wearing yellow vests and putting the torch to government buildings by now … where the hell is our vaunted bravery when we need it?

As for choosing sides, I’m with Nancy, or, as the puppet calls her, Nancy. I hope she stands her ground. If she caves to Trump on wall funding, like a kidnapper he’ll come back for more, and what’ll it be next time? I sort of suspect he’s going to get his wall funding, though … and at the same time doubt the wall will ever be built. The 5.7 billion will go into the pockets of a few favored cronies, but nothing more than a few symbolic sections of fencing will ever go up. The wall we should be worrying about is the one they’ll erect between the southwestern states and the rest of the country when the Colorado runs dry.