It’s a new year and time for another photoblog of the annual collector car show in Tubac, Arizona. This annual event, organized by the Santa Cruz Valley Car Nuts and held on grounds of the Tubac Golf Resort, is one of my favorites. If you ride to the show—and you know how to find it—there’s a semi-secret back entrance for bikers. You ride in on a golf cart path, the same one exhibitors use to drive their cars onto the course, and park on a fairway at the north end of the show area. Student volunteers from a local high school meet you as you turn onto the grass, take your entrance fee, and hand you a wood tile to put under your kickstand so you don’t leave a divot. Visitors’ bikes are a much a part of the show as the cars themselves, so I always make sure I clean and polish the Wing the day before.

When I left home it was 37°F. By the time I got to Tubac, less than 25 miles from the US/Mexico border crossing at Nogales, it had warmed up to 50°. I decided to keep my leather jacket on, a good decision since it never got over 60°. 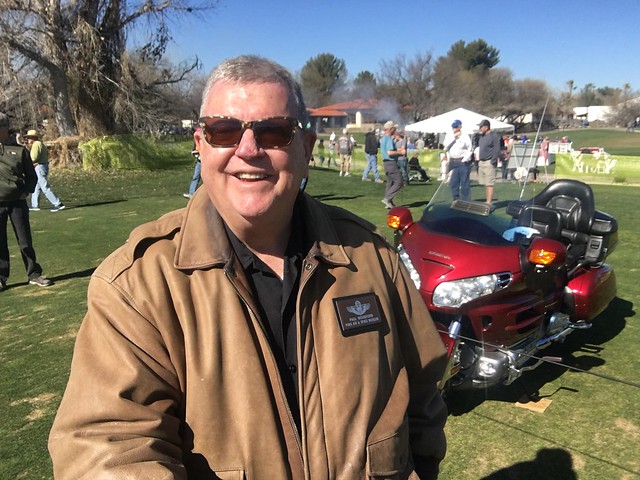 By the way, you can click on any of the images in this photoblog to see full-sized originals on Flickr. You can also scroll through all 106 photos in my Tubac Car Show 2019 Flickr album.

I’ll start with chrome and polished paint, always good for a selfie or two:

I was pleased to see a couple of international entries, a Land Rover and a Renault up from the state of Sonora, Mexico, along with their owners. The Land Rover’s owner spoke Spanish only but I was pleasantly surprised by the number of American visitors who engaged with him in that language (and wish I could have). The Renault’s owner was fluent in English and clearly loved talking about his car, a 1966 Alpine, a model that to my knowledge was never imported to the USA. That one drew me in and I photographed it from several angles.

I love trying to capture details: the back seat legroom in a 1937 Ford, the carefully labeled levers and knobs on the dash of a Citroen Traction Avant, the pristine engine of a Datsun 240Z, the spring-mounted boobs of the Hooters mascot on the antenna of a visitor’s Harley.

Hoods and hoodies. The T-bird salute was particularly impressive, and while I normally resist conformity for conformity’s sake, I wish all of the owners had gone along. As for the La Salle (fourth photo), gee it ran great.

Oh, what the hell. Here are four more, whole cars this time. The yellow ’46 Ford was built during the year of my birth, and like me appears to be holding up well for its age. The cute-as-a-bug Nissan Figaro is what’s called a kei car, not for export to the US (the owner must have pulled some strings to get it over here). The orange hot rod started life as an early 1950s Allstate, a rebadged version of Kaiser’s economy Henry J, sold through Sears Roebuck. And the brake light on that 1933 Pontiac? Who says our great-grandparents weren’t cool?

Last one. As always, I took a sequence of photos from a small rise at the north end of the show and stitched them together in a panorama. Here’s this year’s: