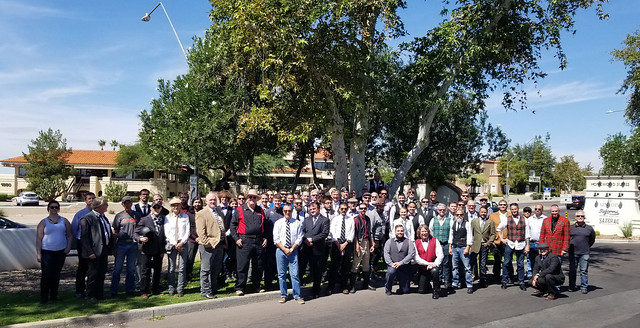 I’m the gent in the front row wearing a black shirt with red stripes and a hat, blocking out the riders behind me. As befits distinguished gentlemen, riders wore ties, vests, vintage riding outfits, even tuxes with tails. I modeled Donna’s embroidery work, which you can see here on my shirt: 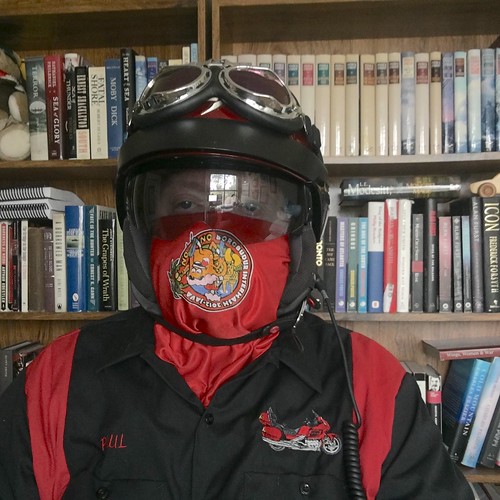 I was going to wear a full-face helmet, but since it was kind of hot I went with a shorty. For the first part of the ride, I used the visor to block UV rays to the top of my face, with SPF 85 sunblock smeared on my nose, cheeks, and chin. The sunblock worked its way into my eyes, so at the halfway point (where the group photo was taken) I decided to cover up. I used a bandana from a 2013 Hash House Harrier meet in Java. Hey, you have a few skin cancers removed from your face, and maybe a skin graft or two, and you’ll understand why I go outdoors disguised as the Invisible Man.

If you’re motorcycle-curious, you can see the rest of my Distinguished Gentleman’s Ride photos in a Flickr album titled DGR 2018 (click the link to see them).

Here’s a short YouTube video that’s not in the Flickr album. The oldest bike at the DGR was a 1930s DKW with a small 2-stroke engine. You don’t see many 2-stroke motorbikes today, but I remember them well, especially the oily smoke they leave in their wake. Realizing the DKW and its rider were right in front of me as we started engines, I pretended to stall out so as to get four or five bikes back. A prudent decision.

But for naught, as it turned out. Arriving home a few hours later, I noticed oil spattered on my left shoe and pants leg. I couldn’t blame the DKW: it came from my own ride. At some point along the route the seals on my Goldwing’s left fork blew: fork oil dripped down to the axle, then blew back onto the left side of the engine … and me. My friend Ed, riding buddy and motorcycle maintenance guru, has my motorcycle now. Parts are on order, and when they come in we’ll tackle another fork rebuild.

Meanwhile, we’re having our house repainted. Donna and I, with Mr. B along for company and adventure, picked up the paint and other materials at Home Depot this morning. It’s threatening to rain so the contractor’s on hold, but we’ve done our part and now it’s up to him. We hope he’ll have it all done before October 11th, when we leave for a reunion with my family in Missouri.

Another item on today’s list: writing a letter of recommendation for our grandson Quentin’s advancement to Eagle Scout. I never made it past Cub Scouts. Our son Gregory was a Cub Scout and a Boy Scout. Now Quentin is preparing to go all the way. You know, if Judge Kavanaugh had been an Eagle Scout, he’d have sailed right through his Supreme Court confirmation hearings. Just sayin’. We’re mighty proud of our grandson.

We’re looking forward to our trip. We’re flying to St. Louis and renting a car, then driving to Cape Girardeau, Missouri, for a three-day family reunion. Afterward we’ll drive to Dayton, Ohio, and a visit to the Air Force Museum at Wright-Patterson Field, then on to Elyria, Ohio to see Donna’s Uncle Dewey. We’ll drive back to St. Louis via Columbia, Illinois, where we’ll spend some time with my nieces Michele and Cindy before flying home.

It’s October and finally cooling down in southern Arizona. About damn time, too.