Air-Minded: Fitting In, Part I 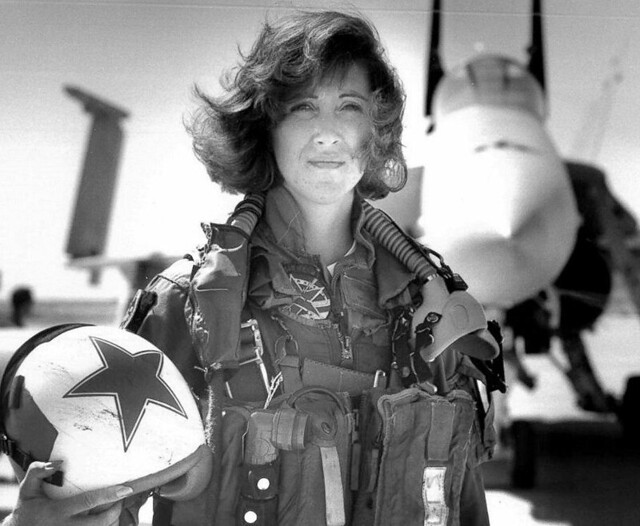 In the wake of Captain Tammi Jo Shults’ masterful handling of a catastrophic engine failure on a Southwest Airlines Boeing 737, stories about her history as one of the first women to fly F/A-18 Super Hornets for the U.S. Navy were everywhere, including one published on May 2, 2018, by the New York Times Magazine and passed on to me by a friend.

That article is what prompts me to write this post, particularly the interviews with female military aviators, expressing what it was like for them to enter what had been, except for a brief period of time during WWII, a male-only profession.

In case, like me, you’ve already consumed your quota of free articles and find this one blocked by the NYT paywall, here are the quotes that registered with me:

Lt. Col. Amy McGrath, USMC F/A-18 pilot: “There were just so few women. You would think we would band together, but a lot of the time, we just wanted to fit in, so we didn’t. We didn’t even know I was the first. We deployed as a squadron to Afghanistan. It really wasn’t until after the first couple of missions that someone said, ‘Hey, I think you’re the first woman to do this in the Marine Corps.’ And then we just sort of dropped it. I didn’t really pat myself on the back. We were in war. We were busy.”

Major Kyleanne Hunter, USMC AH-1 Super Cobra pilot: “Should we have made a bigger deal of what we did? Because that might have highlighted it. Has it been to the detriment of the American people that we allowed some of these stereotypes to persist because nobody knows we were there? It’s almost a Catch-22: We never want to be highlighted, because we’re just another pilot. I don’t want to be a ‘woman pilot.’ I want to be a Cobra pilot.”

Major Lisa Clark, USAF B-52 navigator and B-1 pilot: “I had no idea until I got to the assignment that I was going to be the first. I just tried to keep my head down and do a good job. It was an honor. I just wanted to blend in and not draw attention to myself. I think I put more pressure on myself to do well to fight this idea that women are just a distraction.”

Lieutenant Colonel Teri Poulton, USAF KC-135 and C-17 pilot: “I graduated from the Air Force Academy in 1992 and started pilot training in late 1993. Nobody could pick fighter pilot, because we were women. It did change after that. They offered people a chance — men and women; they were really short on fighter pilots. Most of the time, my survival technique was to keep my head down. I did plenty of jabbing back at the guys, but I just wanted to be not noticed. I never spoke up about my service. But I would say to the women going through now: ‘Don’t make the mistakes I made. You have way more influence than you think you do.’”

Major Monica Marusceac, USMC AV-8 Harrier pilot: “There were really no other women at all — no one to talk to. I always worked very hard to fit in, and in the process of trying to fit in with your peers, you lose a little bit of yourself. I almost felt like major officers were afraid to mentor me. I get it, and I totally want to prove my worth, but I think everybody gets to where they are because someone was thoughtful about their careers and their assignments. I was just happy to hear a positive outcome of a female being in the cockpit because I feel like it takes five of 10 positive stories about women in combat or women in aviation or women in crisis to show how women are good and calm.”

I touched on some of this a few years ago in an Air-Minded post titled Women & Military Aviation. As a man, everything I know about women’s experiences in the military is second-hand, so I was happy to read these women’s comments, which confirmed my earlier observations.

Here’s what I wrote back to the friend who sent me the NYT Magazine article:

Re the article you recommended, I well remember the attitudes of the early woman fighter pilots I met then (and now): they were there to fly and refused to make anything of being a woman … as the article notes again and again, they kept their heads down and did their jobs.

In my earlier blog piece I made up the statistic that women comprise about 5% of the pilot force. The NYT article says 6%. Pretty close, and I don’t know that anyone knows why, since women make up almost 20% of the total military officer force otherwise.

Among the female fighter pilots I have met is Martha McSally (now the congresswoman from my district in Arizona), back when she was a young USAF captain flying A-10s, one of the first women to log combat time. In my post-Air Force career as a defense contractor training fighter pilots, I had the opportunity to meet and talk with a few others: two A-10 pilots and an F-15 pilot (at the time a new lieutenant in one of my former Eagle squadrons). One of those A-10 pilots is a good friend today.

The early resistance to women aviators in the military went away pretty fast once they started flying. Most of the currently-flying male military pilots I talk to accept the women they fly with as equals, and the women are doing just fine, holding their own with anybody.

Culture change? When I went through pilot training in Oklahoma in 1974, our academic instructors would flash Playboy pinup photos every five slides to keep our attention. We’d end the flying day singing dirty songs in the squadron ready room, then head to the stag bar at the O’club to drink beer and watch strippers. When I moved on to fighters, whiskey replaced beer, but otherwise it was more of the same (squared if anything). I think things are more restrained today (no more strippers, anyway), but the hard-drinking, hard-partying culture of the fighter business is essentially unchanged.

The first woman military pilots knew — or quickly learned — what kind of culture they were getting into, which explains the “keep your head down” ethic they embraced (and probably still do since their numbers remain so small).

One of the woman interviewed for the NYT Magazine article, Monica Marusceac, the Marine Harrier pilot, said two things I want to come back to: “There were really no other women at all — no one to talk to,” and “I almost felt like major officers were afraid to mentor me.”

I reached out to my friend Michelle “Xena” Vestal, recently retired after a 20-year career flying A-10s for the Air Force, to ask if she’d look over and share her thoughts on this and my earlier Air-Minded article, and she agreed.*

On the “no other women” topic, she pointed out that while woman pilots comprise 5-6% of the total pilot force (not just fighters but bombers, cargo, tanker, trainer, helicopter, reconnaissance, and support), when it comes to fighters the numbers are tiny: women made up less than one percent of the fighter pilot force in 2004; today their ranks have almost doubled: they’re getting close to two percent. Then she said this:

Well, when you are one of one there isn’t much to band together! The rare two times that my assignment overlapped with another female in the unit, we were in different social and professional circles and did not become besties. … I had an amazing experience with the wives. They were my great and dear friends throughout my career and welcomed me with open arms into their wife network from the time I was in FTU [initial A-10 training]. I speak both languages (boy and girl) and often ended up finding myself in a sort of liaison role and even went so far as to give “pilot academics” to the ladies to help them better understand what their husbands are talking about and what their daily flying activities entail.

That, too, tallies with my own observations. When Donna and I were stationed at Kadena Air Base on Okinawa, we became friends with a KC-135 navigator. All her fellow aviators were men; Donna and the other F-15 squadron wives we introduced her to became her circle of woman friends and she felt less isolated as a result. I’m not putting words in her mouth; she told us that on more than one occasion.

We didn’t call it “mentoring” when I was a new F-15 pilot, but one of the old heads in my first Eagle squadron — Major (later Lieutenant General) Jeff Cliver, an F-105 Thunderchief pilot in Vietnam and later one of the initial cadre of Air Force F-15 pilots — took me under his wing and saw to it I learned to fly a fighter: first as a good wingman, then a two-ship flight lead, then a four-ship flight lead and instructor pilot. I may not have survived the pressure cooker of my first F-15 assignment without his mentorship and I owe him a lot. Not surprisingly, Michelle was mentored too — by male pilots:

Mentoring doesn’t have a sex. That being said, it would have been amazing to have another female fighter pilot to look up to and guide me in those isolating times and thoughts and share perspectives. We were just so few and far between that it wasn’t feasible.

A significant portion of the military officer corps (in my time and now) is politically conservative. Sexism, and even worse, racism, is all too often part of that package. Think, again, about the fact that women make up just 5-6% of the military pilot force (and less than 2% of fighter pilots) when their representation in the total force is closer to 20%, and this may be a reason why. Now think about black pilots, whose numbers are even smaller: about 2% of the total military pilot force (likely far less in fighters), as opposed to 16% of the total force.

You can only admire the courage and determination of those who step up to all that, knowing what they’re getting into. You can only pray things are getting easier as these women (and these black aviators) continue, over and over again, to prove their worth.

* Michelle sent six single-spaced pages of notes and comments, and I was able to incorporate only a tiny fraction of what she had to say here. I hope to share more in future Air-Minded posts. Thanks, Xena!

One thought on “Air-Minded: Fitting In, Part I”