My stampede string came and I attached it to the new sun hat. It’s western, braided leather with silver tips, and pretty long. I’m trying to figure out the best way to wear it when it’s not snugged up under my chin on a windy day. Should I loop it over the brim with the free ends hanging down the back, let the entire affair hang down my back like an Argentinian gaucho, or stuff it up inside the hat? Any suggestions from my style-minded friends?

A Canadian who follows me on Twitter is wintering over in Green Valley, Arizona, and he and his wife plan to meet us at the car show in Tubac tomorrow. Twitter! People who read my Air-Minded posts on this blog and Daily Kos have come to the air museum to meet me before, but a meetup via Twitter will be a first. A serendipitous first, one I’m looking forward to.

I use Twitter differently than* Facebook. There, my “friends” are people I actually know or have at least met. I never look at the news feed; Facebook, for me at any rate, is purely social, a place to catch up with friends and family. Twitter, on the other hand, is one of my primary news sources. I know only a handful of those I follow there. Most are people I’m never likely to meet: working journalists, writers, experts in various fields.

* Yeah, I know: “different than”=bad, “different from”=good. I make an exception here because “I use Twitter differently from Facebook” comes across all grammar nazi.

So anyway, Donna’s riding with me to Tubac on the motorcycle. It’s not often I can talk her into getting on the Goldwing: once a year tops, some years not at all. She’s riding this time because I told her motorcyclists get to park on the golf course right by the show cars and don’t have to walk half a mile from the parking lot like the cagers do. She’s not big on car shows, but she loves meeting new people.

I’m just back from my morning walk with Mr. B, who has taken to shitting twice on his outings. I was unprepared the first time; now I carry two poop bags in my pocket. He hasn’t befouled the house since the last of our holiday company left. Donna attributes his earlier “accidents” (me, I say he did it on purpose) to over-excitement. Polly occasionally drops by, sometimes spending the night in the spare bedroom, but Mr. B knows she’s family and stays cool.

Speaking of Polly, a month ago Quik Mart cut her working hours drastically, then totally. We had to pay her rent. Now she’s starting a part-time job at Home Depot, but of course it comes without benefits, and she’ll have to find a second job or move back in with us. Companies that employ part-time workers want absolute freedom to schedule their work hours, which makes it nearly impossible to balance two service jobs at once. I don’t know how anyone manages in today’s economy. Wish she’d have listened to me years ago and joined the military.

Speaking of Twitter, someone suggested this morning that Democrats lost voters because they didn’t stand up for unions when they were under threat. How the hell did we manage to lose labor unions? Inaction, that’s how, and not just on the part of the Democratic Party … American workers didn’t fight to keep what they had and now everything sucks and people like my daughter, a woman in her 40s, have zero security and have to make do with multiple part-time jobs.

The trend today, from what I see on the news and read on Twitter, is for citizens to get off their asses, run for city, state, and federal office, and wrest control of the country back from the Orcs. People are doing it, but it’s not for everyone, alas. Here, Wikipedia suggests an alternate and strangely appealing path:

But back to the Orcs: is it not perfect that this woman is the face of the Trump administration? 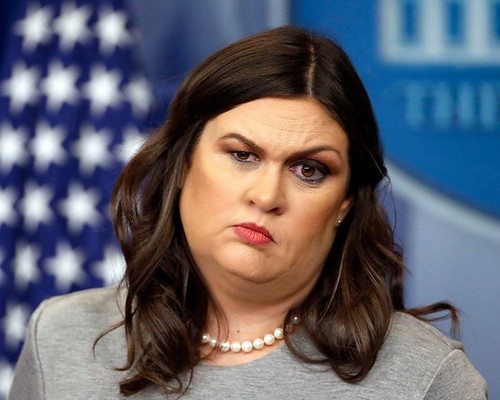 I’m tempted to superimpose the lyrics to the theme song of the 1960s sitcom “That Girl” over this photo and post it to Twitter (I’d probably get a bunch of new followers!), but I have to control those impulses. None of us can help our looks (though smiling helps some) and god knows I’m no prize.

Diamonds, Daisies, Snowflakes,
That Girl
Chestnuts, Rainbows, Springtime …
Is That Girl
She’s tinsel on a tree …
She’s everything that every girl should be!

Sable, Popcorn, White Wine,
That Girl
Gingham, Bluebirds, Broadway …
Is That Girl
She’s mine alone, but luckily for you …
If you find a girl to love,
Only one girl to love,
Then she’ll be That Girl too …
That Girl!