You Can’t Read That! Banned Book Review Lookback: James and the Giant Peach

From a “love letter” to librarians:

I imagine librarians are also working on their Banned Books displays now. Banned Books Week is set for Sept. 24-30, celebrating our freedom to read and to seek and express ideas. My 15-year-old and I try and read one book from the Top Ten challenged books because we know it will help us think, probably make us feel uncomfortable, and generally be good for our brains.

Read this very short story about pirate librarians. Yes, do.

They wanted to promote reading and storytelling and art and truth and for three months that was considered safely theatrical because mostly it was, and in the fourth month a border patrol boat shot at them when they tried to pull in to the national harbor. So, no more storytimes.

Patrons demand a Chicago public library remove an LGBT-themed children’s book. The library stands firm, and “This Day in June” will stay.

Hmm … YouTube sees “putting videos into a ‘limited state’ if they are deemed controversial enough to be considered objectionable, but not hateful, pornographic or violent” as a way of maintaining freedom of speech and allowing discussion of controversial issues without resorting to the wholesale banning of videos. Isn’t that what censors always say?

Let us celebrate a small victory in the unending racist campaign to ban “The Absolutely True Diary of a Part-Time Indian” from American public education.

I don’t know. If I’m reading this right, a kindergarden teacher in Northern California read two children’s books about transgenderism (one of which was the frequently-challenged “I Am Jazz”) to her class, then had the one actual transgender kid in the class change clothes and reveal her true gender. Parents are upset, and I can understand why.

Since 2012, when I first started writing about it, the shutting down of Mexican American studies classes in Tucson Unified School District, along with the banning of textbooks, novels, and plays used in those classes, has never been far from my mind. The latest news is that a U.S. District Court judge has ruled the Republican-controlled state legislature violated the 1st and 14th Amendments in its 2010 legislation outlawing Mexican American and Native American studies, finding that the intent of the law was discriminatory. A hearing is currently underway to determine how the judge’s ruling will be enforced.

This is just one of the reader questions sent in to this advice column on censorship at the School Library Journal (bonus: you’ll like the answers):

A fourth grade teacher in my school loves Roald Dahl’s “James and the Giant Peach” and wants to read it aloud to her students. She asked my advice about using it because she has heard that it has been banned in some school districts. Are you aware of challenges to this novel? 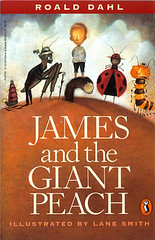 James and the Giant Peach
by Roald Dahl

Speaking of which, this 1961 children’s book literally has been banned in different locations around the U.S. While it’s still occasionally challenged by parents today, the last recorded bannings date from 1999, when it was removed from an elementary school in Lufkin, Texas for containing the word “ass”; banned in Indian River County, Florida for “mystical elements”; banned in Wisconsin because the spider licking her lips could be interpreted as sexual; and banned by a book store owner in Toledo, Ohio because it advocates communism.

Here’s my original review of “James and the Giant Peach,” written for YCRT! in October, 2009:

I can already hear you asking why anyone would try to ban an innocent book for children. My god, have you read the thing? A subversive little boy, seeking to escape well-deserved punishment, meets a rain-coated pervert and accepts from him a bag of body parts harvested from endangered species, then drops the illicit gift and creates hideous genetic mutations. Then he kills his legal guardians and runs away. And not one mention of Christ, never mind any hint of punishment or damnation. I weep for the poor children corrupted by this evil, evil work of witchcraft.