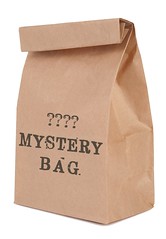 Don’t look for a subject or coherent theme in today’s overdue blog post. All I have are disconnected observations on current events (lord, how can anyone keep up with the news today?), mixed with bits of personal news.

You have to keep some perspective when it comes to Arizona Senator John McCain. Today, he’s a hero for helping to defeat last night’s Senate attempt to kill the Affordable Care Act. Two days ago he was a heel for voting to allow debate on ACA repeal to proceed. But before all that, in a long ago time, he was a corrupt politician who narrowly avoided prison for taking bribes from the savings & loan industry. In the years since, belying his reputation as a maverick, he’s been a loyal Republican, voting in lockstep with conservatives 95% of the time.

But he’s also a former Vietnam War POW, and that’s behind the feelings of respect and gratitude most Americans have for him. He sacrificed, and sacrificed hard. As for Democrats and liberal Americans, we can never forget the day he shut down that racist bigot at a 2008 campaign rally by praising Barack Obama, his opponent, as a patriotic American. A little bit of decency, with us, goes a long way. Yes, I have mixed feelings toward John McCain, and I’m not ashamed to admit it.

Adding to my ambivalence toward John McCain is this, nicely expressed in a Facebook comment posted by a young Vietnamese-American friend:

I’ve always admired him (though I didn’t always agree with a few of his decisions, such as choosing Sarah Palin). He’s always been rather supportive of the Vietnamese-American community so lots of Vietnamese-Americans like him too. He pushed through legislation in the 1990s allowing Vietnamese refugees bring their families to the US. Before that he also often pushed to the Senate to help South Vietnamese veterans get to the US in addition to pushing the interests of Vietnamese refugees in general in the Senate.

I don’t know what McCain’s reasons were for voting no on Obamacare repeal. The two Republican senators who broke ranks with him, Alaska’s Lisa Murkowski and Maine’s Susan Collins, were probably looking out for their constituents, many of whom depend on Medicare and the ACA for medical coverage. My personal experience as a politically-active Arizonan who has tried to engage John McCain on several occasions tells me the only constituents he answers to are major Republican donors and the NRA, and I suspect his vote was more a calculated act of revenge against the unelected president, who has never retracted or apologized for the disrespectful things he said about John McCain and the other American POWs. Capture this, bitch!

Well, whatever the reason, last night’s no vote was a great big affirmative YES to the American people, and I’m happy John McCain will end his long political career on a positive note.

You all know what I’m talking about, right? Most of my readers (even my Canadian and European friends) have been following the American health care repeal story, so I shouldn’t have to fill this post with links. In any case, I don’t plan to.

I survived another of my dermatologist’s periodic attempts on my life.

This time it was a squamous cell skin cancer on my right cheek. When I went in for the surgery two days ago my dermatologist discovered a second one an inch to the right of the one we knew about, so he went after both of them, including the skin between in case they were connected. The resulting scar is five centimeters wide, about two inches. As the before & after photos show, what looked pretty dire on the ride home from the clinic seemed altogether less so the next day, when the big dressing came off. Now I just have to keep the steri-strips dry until next Thursday, when the stitches come out.

Since 1997, when I had my first basal cell skin cancer removed, I’ve had a dozen skin cancer surgeries (ten basal cell and two squamous cell, thank goodness no melanomas). All have been on my face. Some have left pronounced scars, especially up against my hairline, but most healed up well. I think this one’s going to heal well.

I take a lot of precautions these days … sun hats, sunblock, long sleeves and full-face helmets on motorcycle rides … but I’m not willing to take the ultimate precaution of staying indoors all the time, and anyway most of the damage was done years ago. Pilots spend a surprisingly large amount of time out on the flight line, unprotected from the sun, and years of cross-country running and partying with the Hash House Harriers hasn’t helped either.

Frankly, I’m surprised my Hash House Harrier friends on Facebook haven’t swamped the news feed with shares. Hashers, frankly, are quick to pick up on anything that justifies drinking or makes it look like a harmless activity, and of course they all think of themselves as moderate drinkers. To paraphrase Dylan Thomas, to a hasher a heavy drinker is someone you don’t like who drinks as much as you do.

Speaking of links that take you to autoplaying videos, and especially links that take you to instructional* YouTubes and podcasts, I hate ’em. I’m a reader, and when I’m looking for information I want it in writing. Videos and podcasts take forever, and I don’t feel the need to see or listen to some talking head telling me what I could have read and absorbed far quicker on my own. Also, if I need to refer back to a sentence in a textual link, I can find it fast. With a video or podcast, I have to sit through the whole damn thing again.

My policy at Paul’s Thing is to avoid links like that, and if I have to use one, to include a warning like the one above (“warning: autoplaying video at the link”). I sure wish everyone would do that.

*Mind you, I’m not talking about entertainment links. You say you have a YouTube of a sea lion dragging a little girl into the water or a podcast of Sarah Vowell talking about Johnny and Rosanne Cash? I’m there, baby!

Yesterday, July 27th, was the 45th anniversary of the first flight of the F-15 Eagle. I’m proud as hell of having flown the Eagle, which I did from 1978 to 1997, and as you know I often blog about my experiences. So instead of saying things I’ve said before, or linking to F-15 videos you’ve seen before, how about a link to my F-15 photo collection on Pinterest? Lots of good stuff there … and not a Mudhen to be found.

This one’s tricky: U.S. admiral stands ready to obey a Trump nuclear strike order. The usual suspects are horrified. One comment from Facebook:

No leader of any nation has the right to end the human race. Particularly a leader who is clearly demented. But any officer or even soldier has the right to refuse an order from a senior to fire on unarmed civilians, to torture prisoners of war, to bomb schools full of children. “I was just following orders” didn’t cut it at the Nuremberg trials. No senior officer all the way up to the Commander in Chief has the legal right to order crimes against humanity.

No military officer, commander, or leader is going to preemptively declare that he or she will refuse an order from the commander-in-chief, no matter what the order or who the commander-in-chief is, until the order is given. Had the admiral said “Nope, I won’t obey a Trump nuclear strike order,” he’d not only have undermined the doctrine of civilian control over the US military, but undermined the basic concept of compliance with military orders, and sabotaged our nation’s nuclear deterrence to boot. He’s also have been summarily retired and busted down in rank.

No, I don’t think our unelected president can be trusted with nuclear weapons, and should he ever order their use, I hope senior military leadership will carefully weigh it, and if it comes from senility or mere pique, refuse to carry it out (as in the final drunken days of the Nixon administration), but that ain’t gonna happen until the order’s given, and that’s if the moron survives long enough to give it.

We and several other nations have nuclear weapons. They are a fact of life and they aren’t going anywhere. Our weapons are meant as a deterrence to nuclear aggression by other nations. We can say “no first use,” sure. But we can’t say “we’ll never use them,” or “don’t worry, the military will ignore commanders-in-chief it doesn’t like,” or the deterrent effect of having nuclear weapons … or even a military … goes away.

That’s how the world works.

Speaking of the military and orders from the C in C, it’s good that CJCS General Dunford refused to react to Trump’s out-of-the-blue Twitter announcement that trans troops are no longer allowed to serve. Because the fact is trans troops are allowed to serve, a DoD policy introduced during the Obama administration, and there are thousands currently in the ranks.

How many trans servicemen and women are serving is speculation, since some (many?) have not declared their status and might prefer to keep it private, as is surely their prerogative. The day of Trump’s idiot tweets, the media reported numbers varying from 5,000 to 15,000 trans troops on active duty. By the end of the day and the evening cable news shows, the number had settled back down to around 5,000, and the next day Rachel Maddow said the actual number is closer to 2,500.

I suspect the actual number of trans people serving in the ranks is small, but that in no way is meant to diminish their contribution. For more than a year now it’s been official policy that trans people can serve in the Navy, Army, Air Force, Marine Corps, and Coast Guard. Moreover, they’ve been told it’s now safe to come out … and indeed many have. It would be a huge betrayal to change the rules retroactively, which is what Trump is blithely trying to pull off, probably to appease religious zealots in his administration (like Mike Pence).

But back to General Dunford. Any military or government agency that reacts to a tweet from Trump would be setting a horrible, irreversible precedent. Dunford’s absolutely right to refuse to react to Trump’s tweets, and I just pray Secretary of Defense Mattis doesn’t undermine the CJCS when he returns from vacation. Trump probably has it within his power to issue an executive order reversing the current policy allowing trans members to serve, just as Truman had it in his power to order the military to racially integrate in 1948. The thing is, he has to issue the executive order, and so far all he’s done is peck out a couple of tweets while sitting on the White House toilet at three in the morning.

Well, as long as I’m talking tweets, how about I end the post with this one? 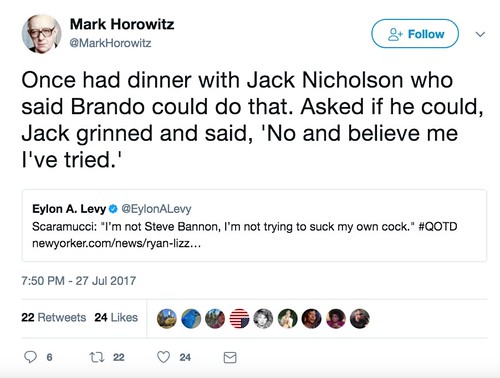 My god, how far we’ve sunk, and how fast. I seriously cannot forgive anyone who, knowing what Trump is and what kind of people he surrounds himself with, voted for him.