A Different Kind of Writing

I’ve been taking time off from the blog to work on a memoir. It’s a different kind of writing from what I normally do. I like the little bit I’ve done so far, but since it’s about me that’s no surprise. What I don’t know is if anyone else will have the patience to read it, never mind pay for it.

I’ve been blogging since 2004, but really since 1995 if you include the articles I wrote for my old Hash House Harrier website, the Half-Mind Catalog. Writing for online readers is different. You’re going for short and digestible, two or three main points total. You link to outside sources, you spice things up with graphics and photos. When you’re writing a memoir, you’re writing a book. There aren’t any links, and while you might consider adding footnotes or a bibliography, you know no one’s going to read them. Photos? One or two at most, and that’s for the entire book: you’re going to have to do a better job describing things.

We’ll see. I’ll press on with the memoir for now, but after taking a week off from blogging I find I miss it. The question is, what to put on the front burner, the memoir or the blog? Magic 8 Ball says “check back later.”

Gym again this morning. The wall TVs were all set to Fox, but only one had the volume on, and it was loud enough to hear from one end to the other. I was on one of the leg machines when Fox started playing a Trump speech. I hate the way he talks. I hate what he talks about. I hate his voice. And I guess I’m not alone … a younger guy asked everyone if it was okay to turn the volume down, and the other two or three of us said hell yes, and then he turned it off altogether.

I don’t want to use the Trump administration’s vocabulary, but obviously the transcripts of Trump’s telephone conversations with Australian and Mexican leaders were, well, leaked. If you were a foreign head of state, would you now be willing to speak on the phone with the president of the USA? Of course not. You might not even be willing to speak with him face to face, unless there’s no one else within earshot, and even then you’d wonder if your conversation was being taped somehow. These kinds of leaks, no matter how hard you want to see Trump fail, are not a good thing.

So who’s doing the leaking? Someone close to the man. Someone with access. Someone in a position of trust. Someone who wants to bring Trump down. Here’s an AP photo from January, taken during Trump’s telephone conversation with Australian Prime Minister Malcolm Turnbull: 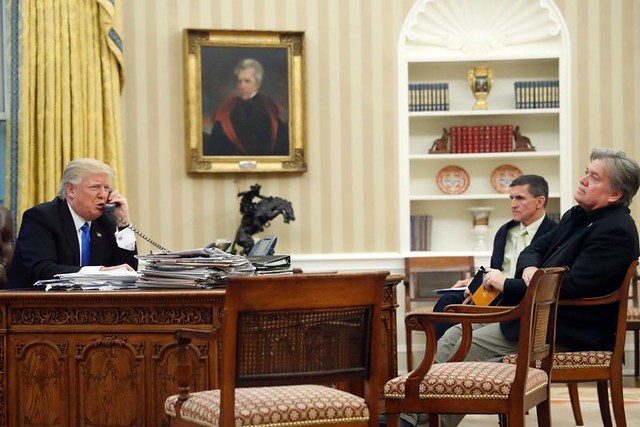 Who was in the room (besides the photographer who took this shot)? Steve Bannon and Michael Flynn. That’s where I’d start my witch hunt (damn it, Trump, stop putting words in my mouth).

As for Trump’s obliviousness during those calls, it’s nothing we haven’t seen before. He lives in his own reality, impervious to outside voices and events. I think he really believes his own bombast: the size of the crowd during his inauguration, the imaginary congratulations from the president of the Boy Scouts, the millions of fake “voters” who marked their ballots for Hillary Clinton. He thinks he’s leading. He probably thinks the military has already shown the door to trans servicemen and women. It’s becoming obvious, even to his supporters, that no one’s on the bridge. How much longer can this go on?

Speaking of links: on Wednesday a teenager opened an emergency escape hatch, climbed out and slid off the wing of a jetliner that had just landed at San Francisco International. I jokingly tweeted that copycats are coming: when I drove school buses a few years ago, teenaged boys would sit in the back and egg each other on until one would open the emergency door and jump out. My joke was nothing compared to Steven Slater’s one-word tweet: “Amateur” (it helps if you remember who Steven Slater is).

This morning, though, I see there’s more to the story: other passengers on the flight said the kid seemed emotionally distressed, and he’s now being evaluated at a mental health facility. 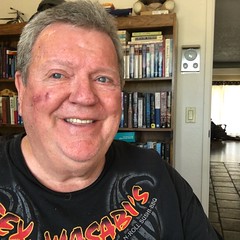 My stitches are out, and I think the scar will heal up nicely. Still a little red, but fading fast. That’s my favorite gym shirt, by the way.

We got word this morning that a hashing friend from our days with the Honolulu and Aloha Hash House Harriers has died. Over the weekend our neighborhood’s oldest resident died as well. He was the man who put on our annual 4th of July parades. We last sat down with him a year ago, when we needed to get the neighborhood architectural committee’s approval for a fence. Active well into the last year of his life, died at home. Something to strive for.

Hey, I’m in my 70s. I’m allowed to write about stuff like this now, right? When you start thinking about memoirs and friends dying off, it’s time to start paying attention to certain details. Like the location of the nearest emergency hatch.

3 thoughts on “A Different Kind of Writing”