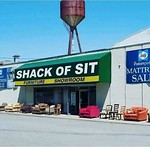 Or Shack o’ Sit, if you prefer. Cleverly vulgar signs and business names are funny the first time you see them, but the humor wears out fast. Used to be, I’d see photos like this on Facebook and instantly share them with all my friends. These days I try to exercise restraint … and yet here I am leading off a blog post with potty humor. When I look at this post tomorrow, that photo won’t seem nearly as funny, and I’ll regret having taken the low road.

It’s vulgar, all right, but at least the joke’s not at anyone’s expense, like the kind that stay funny forever to a certain demographic. You know, the demographic that cracks, whenever anyone mentions rape, “Why not just lie back and enjoy it? Haw haw haw.”

One of my favorite bloggers is a Detroit journalist named Nancy Nall Derringer. The other day she wrote this, about a lifeguarding class she’s taking:

Saturday was more lifeguarding class. We practiced all our saves and had our water test, which we all passed. I still don’t feel competent, but I’m less incompetent. Sunday was the written test. The instructor plugged some gaps in our instruction, including the dreaded AFR—accidental fecal release. We were told the sanitation procedures for both the Baby Ruth variety and the chocolate-milk spill, and she revealed that some years ago, her lowest-performing guard arranged just such an event to force a closure and an early quitting time for himself.

Reader, I cannot tell a lie: My first thought was, I bet I know who he voted for.

Um, could it have been this guy? 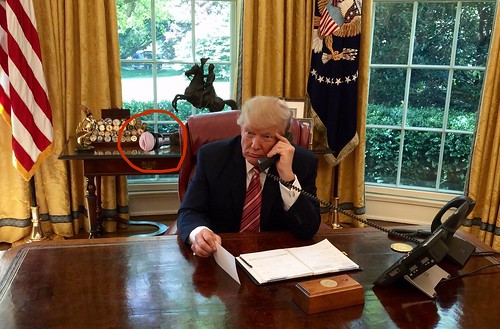 I’m reading Mary Shelley’s “Frankenstein,” a classic published in 1818. Thought I’d read it as a kid, but I was wrong: it’s all new to me. Frankly, it’s a struggle. An Arctic explorer leads off with a long and repetitious narrative, expressed in lofty words and phrases disconnected from such concerns of daily life as making money, thinking of the opposite sex in any terms other than spiritual, eating, shitting, and such. He rescues a young man from an ice floe. That man is Victor Frankenstein, who starts in a long and repetitious narrative of his own, also lofty and disconnected, interrupting himself halfway though to repeat, verbatim, the long, repetitious, lofty and disconnected narrative told him by his creation, the monster.

It’s also racist as fuck. Like everything written back then.

There’s no science in this early work of science fiction: through vague and allusive hints one gathers that Frankenstein assembled a body of gigantic stature from limbs and bones (no mention of unseemly parts like organs and guts) in the attic of an apartment house he shares with other university students. Surprisingly, no one complains about the stink or blood dripping from the ceilings. The “animating principle,” young Victor’s great discovery, is a mystery: one night during a thunderstorm the creature opens its eyes and buggers off. What consumed 90% of the 1930s screenplay is a single sentence in the original novel.

I’m only halfway though but will persevere. Somehow or other, the slog will be its own reward.

A while back I wrote an Air-Minded post about the “Golden Age” of air travel, cross-posting it to Daily Kos. Some of DKos’ more class-conscious readers took me to task for glorifying a mode of travel available only to the rich. That’s nonsense, of course: plenty of middle-class Americans took to air travel in the 1950s and 60s, my decidedly non-wealthy family included. I’ve been thinking about expanding on the original post to discuss the many ways Golden Age air travel impacted regular people, whether or not they flew.

In my research, I’ve unearthed some interesting things. Among them:

On that last point … the first pressurized airliner capable of coast-to-coast nonstop flight was the Lockheed Constellation, but only from west to east, helped along by prevailing westerly winds aloft (even then, airline itineraries almost always included a refueling stop along the way). Nonstops from East Coast to West Coast airports weren’t possible until the introduction of the Douglas DC-7, a more powerful version of the earlier DC-6.

The DC-7 was ordered by the CEO of American Airlines, who wanted to maximize profits: if his airline could fly from NYC to LA in less than eight hours, he only had to pay a single cockpit and cabin crew.

In addition to more powerful engines, the DC-7 packed additional fuel tanks inside the engine nacelles. Here are a couple of photos of Pima Air & Space Museum’s DC-7B, a former airliner that ended its days as a borate bomber for the US Forest Service:

The extra fuel tanks are under the engine nacelle humps on top of the wing. The humps are subtle, and I didn’t know they were there until reading about them. When I have time, I’ll take comparison photos of our DC-6 from the same angle.

Grist for several future Air-Minded posts, anyway. I love this sort of stuff, probably because I flew on Lockheed Connies when I was a kid, wealthy elitist that I am. I also flew on unpressurized DC-3s, which some regional US carriers used for short routes well into the 1970s.

We are slowly coming to the end of a record-breaking heatwave. We’ve been hunkered down indoors … it’s too hot to do anything else. Luckily, the local power company managed to get through the last two weeks without instituting rolling blackouts. It’s not over yet: temperatures aren’t forecast to go back down to 105° until Sunday!