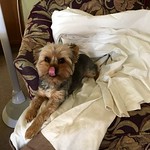 I didn’t want to say anything until we were sure, and now we are: Bella the Yorkie has found her forever home. We took Bella in because her mom is sick and can no longer have pets in the house. Last weekend we took Bella and Maxie shopping. I was standing on a strip of grass in the parking lot, waiting for them to pee, when a lady walked over to see them. She said she had a mini dachshund at home and had recently lost a Yorkie like Bella. I told her Bella was looking for a new home and she said she’d love to adopt her. Donna came out of the store and joined the conversation, and before you know it the deal was done, but not before Donna took Bella over to check out the family and their house. They passed with flying colors and Bella is there now.

We have mixed feelings. Bella was a smart little girl, and though her previous mom fell down on the task of housebreaking her, she was trying hard at our place and we think we got her there during the month we had her. She was sweet and affectionate with both of us, and she loved to play. Donna could have easily kept her, but my heart’s set on another miniature dachshund, so it’s best she found a home with good people who love Yorkies.

I wanted to take another look at Mary Shelley’s “Frankenstein,” last read when I was a teenager, so I paid a buck-eighty for Amazon’s Kindle edition. I started to read it last night and couldn’t get through two pages. Spaces between words were missing on nearly every line of text, likethis. It was like trying to read “The Canterbury Tales” in Middle English: I could make sense of it but it was a lot of work. I put it aside, unfinished, sent Amazon a nastygram, and mentioned my disappointment on Facebook. This morning a friend sent me a link to a free downloadable Kindle edition from Project Gutenberg, and so far it’s free of errors and typos.

This morning’s chores included making a fresh jug of sugar water for the hummingbird feeders. I keep the jug in the fridge and refill the outdoor feeders from it every Saturday. This time I changed the water/sugar ratio from 4:1 to 6:1. More water is better when it’s super hot, and it’s been super hot.

I see larger birds swooping over the swimming pool from time to time, scooping up water in their beaks as they skim the surface, but never smaller birds or hummingbirds. I wonder where they go to drink? Anyway, I put out an old metal bowl of water this morning, down on the ground near the wild bird feeder, and am keeping an eye on it. So far no takers.

The Washington Post published a scoop about how President Obama was warned in August 2016 of Russian meddling in the 2016 election, and how he did nothing about it until after the election, when he punished Russia by sending 35 of its diplomats home and closing two recreational compounds leased by its government. You know what, though? There’s no scoop here. All this stuff was covered months ago by the Washington Post and other media outlets. This seems to be a trend in journalism today: promise shocking new revelations and smoking guns; deliver moldy old news in a fresh wrapping.

I have a beef with Obama, a man I respect and admire in every respect save one: not wanting to appear “partisan” or stir up the racist right, he caved on some really important shit. He stood by and watched as red state after red state suppressed Democratic voters through bullshit voter ID schemes reminiscent of the poll taxes and voter qualification tests of the Jim Crow South. He stood by as red state after red state gerrymandered voting districts to further disempower Democratic voters. The result has been solid Republican majorities in the House and Senate, and the installation (I can’t bring myself to call it an election, not when the other candidate got three million more votes than the guy who’s in office now) of a Republican president.

President Obama could have sicced his Justice Department on state-level voter suppression. He could and should have ordered them to go after gerrymandering. He didn’t, and now we have an administration that most assuredly never will, and things are going to get much worse over the next four (and possibly eight) years. He stood by and watched as Russia put its thumb on the scale during the 2016 presidential election. He didn’t want to be seen as partisan. He didn’t want to fight dirty, and yet he was in the fight of his and his party’s life.

You bet I fault him for that. If you look back at blog posts I put up during the time he was president, you’ll see this has always my beef with President Obama. But beware of saying anything about it today! Party line liberals will jump in your shit. Like this: 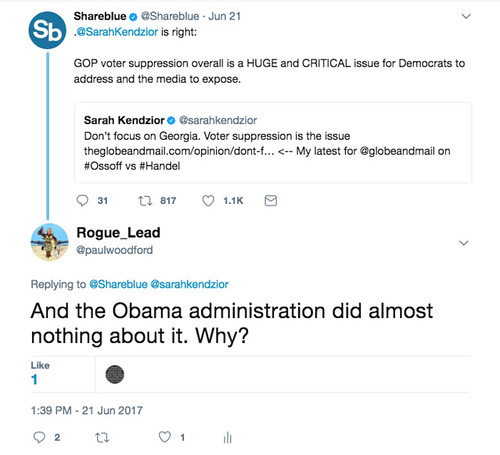 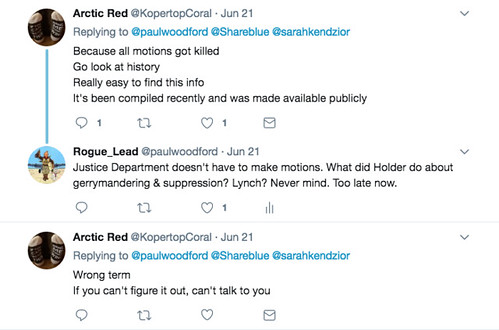 Their argument seems to be that anything negative you might say about Obama (or Hillary Clinton or Bernie Sanders) will be seized upon and weaponized by the right, thus weakening the struggle against Trump. I remember SDS leaders saying similar things during the Vietnam protest movement of the 1960s, trying to keep unruly members on message. Lenin and his buds were big on party discipline too, and they took harsher measures than merely jumping in people’s shit.

Well, that was bullshit then and it’s bullshit now. The right has seized upon and weaponized every negative thing said by every liberal and progressive ever, and yet the struggle goes on. Weaponize this, assholes.