Attack the Enemy When He Is Unprepared 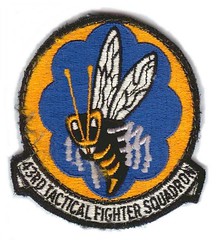 Wasps love our pool. They light on the water, float on surface tension for a few minutes, then fly off to their nests. They’re drinking, as anyone would in this heat, and I suspect storing a little extra water somewhere to deliver to the nest. It’s normally live & let live at Woodford Manor, but when the number of wasps floating near us in the pool goes from one or two to five or six, it’s time to find the nest and deal with it.

Wasps are smart, and they learn. They used to build up under the eaves of our house, up high but at least where we could see their nests. After I sprayed and knocked down a few nests I thought they’d given up on our house, but I was wrong … they’re still up under the eaves, but now their nests are cleverly hidden, tucked into sharp corners hidden by crossbeams, areas so tight you can’t get your head in there, even on a ladder, to find them. Like I want to stick my head in a tight space where there might be a nest of wasps, am I right?

The wasps have been more numerous than ever this year. We sprayed and killed a couple of hidden nests last month, but they’re still around. The other day I saw three or four wasps buzzing around under the highest peak of the breezeway between the house and garage, and by using a ladder and bending my head so hard I hurt my neck, finally found their secret Shangri-La.

An exterminator told us to get up early to spray wasp nests. Get ’em while they’re still sleeping, as unsporting as that sounds. I took his advice. When the dogs woke up to pee at 5 AM I got up with them, dressed, got my spray can and ladder, and did what had to be done. Got ’em, too.

Coincidentally, we’re in a heat wave here in southern Arizona. It was hot and muggy at 5 AM, inside and out. We program the thermostat to let the house temperature go up to 80°F from midnight to 6 AM. We usually get up at 6:30, and by then the AC’s back on. This morning I broke a sweat just dressing in the bathroom. I wanted to be covered as completely as possible, so I wore long pants, a long sleeved shirt, and a full face motorcycle helmet. I was drenched by the time I came back in.

That patch at the top of the post is from one of my former F-15 units, the 43rd Tactical Fighter Squadron. When I was with the Hornets (I know hornets and wasps are different, but I can’t tell one from the other), the 43rd flew out of Elmendorf AFB, Alaska. The 43rd—which today trains pilots to fly the F-22 at Tyndall AFB on the Florida Panhandle—has an interesting history, which you can read about on Wikipedia. I want to quote two sentences about the squadron’s time in Alaska:

In 1982, the 43d became the first squadron to convert to the F-15 Eagle. Without help from a combat ready unit, the squadron developed its own F-15 training program and completed the first ever F-15 low runway condition reading tests.

Why? Because that was mostly me. Me and Crumer, the first two F-15 pilots to arrive in Alaska. Then-Alaska Senator Ted Stevens brought the F-15 to Alaskan Air Command against the wishes of the Pentagon and USAF, and Crumer and I were on our own, working in a back room of what was still an active F-4E Phantom II squadron. For two months, with no F-15s of our own to fly, with no other F-15 pilots to back us up or any help from the USAF, we worked out a training and conversion program, and when jets and pilots finally began arriving, we trained them and got the unit off to a good start. Crumer and I did it all, including sliding down ice-covered runways in the first of our F-15s, tailhooks down to catch cables if the brakes didn’t grab, to determine how well we’d be able to operate in Arctic conditions.

Well, enough bragging—what have I done for anyone lately, right?

It’s just after eight in the morning and the temperature outside is already over 90°, on its way to a forecast high of 110°. It was so hot yesterday Pima Air & Space Museum canceled my scheduled afternoon tram tour and sent me home early, but not before I wandered into Hangar Three to take a few photos.

In an earlier post I put up photos of a WWII Soviet IL-2 Shturmovik we’re restoring. The wings are being built in one hangar, the tail section in another, the cockpit in a third. I mentioned that the engine has been on display in Hangar Three, and here it is:

The engine is a Mikulin AM-38F, a liquid-cooled V-12. Presumably, it’ll take its place in the nose of the IL-2 before too much longer. The IL-2, by the way, was the most produced aircraft in history. All total, the USSR built more than 36,000. Two remain today, but soon there’ll be three.

While I was in the hangar I walked over to the northwest corner where the museum has its “black aviation” display. Many air museums have sections devoted to the history and achievements of black aviators. Sadly, most of the displays I’ve seen are like Pima’s: neglected, tucked into a back corner where few visitors go, looking and feeling like a tokenistic afterthought:

Somewhere on the wall there’s mention of a WWII-era black bomber training unit in southern Arizona. Most everyone has heard of the Tuskegee Airmen, the black Mustang pilots who escorted American bombers during WWII. Well, of course: those men flew fighters, and that’s where the glamor is. But there were other Tuskegee Airmen too, and they flew bombers, getting little glory. One of the many WWII B-25 training bases was down the road in Douglas, Arizona, where one or more all-white squadrons trained alongside a segregated all-black squadron. Nearby Fort Huachuca had long been home to segregated black infantry units, from the “Buffalo Soldiers” of the Civil War through WWII, and that’s probably where the black aircrews who trained at Douglas Army Airfield were housed.

About fifteen years ago an Army friend asked me to officiate his son’s wedding. The venue was the old black officers’ club at Fort Huachuca, “separate but equal” (right) until President Truman ordered the military to integrate in 1947, at which point it became an all-ranks auxiliary club for everyone stationed there. I love this kind of history, and explored that place from top to bottom. Sadly, a few years later the Army tore it down. What’s left today? A plaque on the wall in an out-of-the-way corner of a hangar at Pima Air & Space Museum.

You know, guys & girls (I’m talking to you, Pima Air & Space), we can do better. Our women in aviation exhibit occupies a big area in the middle of the main display hangar, featuring big screen videos and aircraft flown by notable woman aviators. The black aviation display has no videos, just faded photos. There aren’t any aircraft, either: not a Red Tail Mustang, not a black-crewed B-25 Mitchell, not even one of the trainers black student pilots learned in during WWII (and the sad thing is we actually have one of those but it’s on display in another hangar and you’d only know the part it played in black aviation history if you read the fine print on the sign).

We can do better, and we should.