Bring Me a Pepsi, This Is Getting Good (Updated) 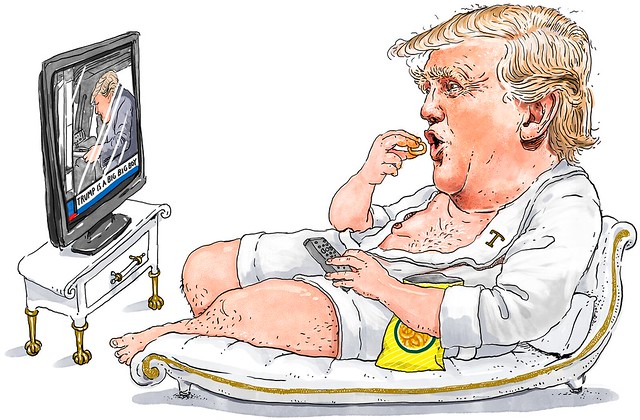 This article started making the rounds yesterday. One paragraph catches my eye:

If you want to understand intra-GOP warfare, the decision-making process of our president, the implosion of the Republican healthcare plan, and the rest of the politics of the Trump era, you don’t need to know about Russian espionage tactics, the state of the white working class, or even the beliefs of the “alt-right.” You pretty much just need to be in semi-regular contact with a white, reasonably comfortable, male retiree. We are now ruled by men who think and act very much like that ordinary man you might know, and if you want to know why they believe so many strange and terrible things, you can basically blame the fact that a large and lucrative industry is dedicated to lying to them.

Hey, wait a minute … I’m a white, reasonably comfortable, male retiree. I’m also a lifelong liberal. I was still a teenager when I took to the streets with tens of thousands of white people my age to protest the war in Vietnam. That same year the teenager who was to become my wife joined me and several hundred others to pack clothing and food for the Freedom Riders, and a few of our braver contemporaries headed south to join them. White men (and women) my age helped drive Johnson and Nixon out of office. We voted for Carter, Clinton, Gore (and, foolishly, Nader), Obama. We may have split over Bernie v. Hillary, but we sure as hell didn’t vote for Trump. Nor do we read Drudge, watch Fox News, or listen to AM hate radio. We shop at Costco, not Walmart. Add our votes to those cast by women and minorities, and we far outnumber the sorry frightened bubble-dwellers this article talks about.

And anyway, fuck the sorry frightened bubble-dwellers. I’m sick of pundits and journalists trying to get us to understand their benighted tribal beliefs. What’s to understand? They’re stupid and racist and they will never change. The best way to put them back in their box is to make our majority work, to turn out in numbers and vote their representatives out of office. Sadly, even with our majority—should we ever get our shit together—it’ll be an uphill battle. As a result of Republican gerrymandering and Electoral College fuckery (none of which will be undone under current leadership), the approximately 3,000,000-vote majority we gave Hillary Clinton in November was simply tossed out, and I’m more cynical than ever as a result. Short of open revolution, though, voting is all we’ve got.

Last night on Twitter I got into it with a couple of strangers I’d probably feel right at home with if we ever met. One posted that Trump has mobilized the Pacific Fleet for a war with North Korea. Others jumped in with similar reports. I was skeptical. A Google news search turned up nothing on PACFLT, far less anything about mobilization or deployments to WESTPAC. More searching revealed that the USS Carl Vinson task force had deployed in January and had operated in Korean waters, but was now in Singapore, and I seemed to remember that when it was originally deployed it was in response to the Chinese occupation of the Spratly Islands, a long-simmering issue (the US military has been concerned about it, and has been preparing operational plans to respond to it, since I flew F-15s in Japan in the early 1990s).

I pointed some of this out, and several alarmists jumped in to suggest the media was not reporting on it and that whatever “official” information I had found was intentional misdirection. One woman swore that every US Navy ship based at San Diego had sailed in the last few days … she had seen it with her own eyes. Once again, the only hard information I could find was that two destroyers had sailed for WESTPAC in late March. I asked a friend in San Diego to take a look and she said nope, the harbor’s still full of Navy ships.

A telling sign we’re about to do something in Korea would be a buildup of air and ground forces in the Pacific, and there’s no indication anything like that is happening. Sure, we recently conducted a military exercise with our South Korean counterparts (probably why the Carl Vinson task force was there), but we do that every year (and every year the Norks cry bloody murder). Let me know when US-based fighter and bomber squadrons start deploying to Osan, Kadena, and Guam. Let me know when the Army and Marines start to call up the reserves. Let me know when war materiel starts piling up at West Coast ports. Oh, and if you want to know where the Navy’s carriers are these days, how about Googling “Where Are the Carriers?”

Look, I’ve been obsessing about Korea since I was stationed in Japan two decades and change ago. I follow defense news closely. I would hope the current administration has put some thought into how to respond to North Korean craziness, but judging by everything I’ve seen, it’s far more likely Trump and his skeleton crew on the National Security Council are, at best, playing catch-up ball. I do not believe for a minute any kind of large-scale mobilization or change in DEFCON would escape the notice of the media, especially those media organizations Trump has labeled enemies of the people. The media has been diligent in reporting on additional American forces being sent to Syria and Iraq, and I’m pretty sure they’d be all over a buildup in the Pacific.

Speaking of Syria, we’ve been conducting airstrikes there since September 2014, airstrikes started under Obama and continuing under Trump. But the airstrikes are directed against ISIS targets in Syria, not against the Syrian government. Obama wanted to go after Assad in 2013 after an earlier gas attack against Syrian civilians, but he wanted approval from Congress and Congress didn’t act, claiming there was no public support for strikes against Assad (in reality, though, they were afraid conservative voters would turn them out if they were seen to have cooperated with Obama on anything).

Still, if Obama had been willing to act without Congressional approval, there was at that time a window of opportunity to take out Assad. The window closed with the arrival of the Russians.

I’m worried the Trump administration may be eyeing a quick and easy war as a way to boost the economy and its own popularity. If that’s the way they’re thinking, they may see a similar window of opportunity with regard to North Korea. Right now, the Chinese aren’t in NK. Neither are the Russians. Strike now and ask forgiveness later, as Obama might have done in Syria when he had the chance. Talk about brinksmanship, though—what if forgiveness is not forthcoming?

Is a game-changing US strike against North Korea even possible, short of attacking with nuclear weapons? Yes, I think so (from the comfort of my ergonomic home office chair): we could neutralize NK air forces and air defenses quickly, then hit Pyongyang and NK military targets with massive conventional bomber and cruise missile attacks. With the leadership decapitated and a lot of its military infrastructure in ruins, remaining NK forces might not march south. We’d have to not give a shit about massive civilian casualties and death, not to mention international opinion. Securing NK is a different story. We’d have to occupy the country afterward, and surely China would intervene. They might not be able to stop us before we destroyed Pyongyang, but they’d run us out of the country afterward. As every general and war planner has ever said, “Never get in a land war in Asia.”

Of course, we could consider deploying a Kardashian to share a cold Pepsi with Kim Jong Un. That might work.

Update (4/7/17): Like everyone, last night I was up watching network coverage of our cruise missile attack on the Syrian air base. A few thoughts this morning:

– Russia helped bail us out of the 2013 impasse when Obama wanted to strike Assad in retaliation for a previous & much larger gas attack, but Congress wouldn’t approve military force. If you remember, Russia brokered an agreement with Assad to hand over his stockpiles of chemical weapons, and we (the US) destroyed them at sea. Clearly, Assad did not act in good faith.
– I don’t know if Obama ever considered it, but before Russia based troops in Syria we could have gone after Assad himself, as we once went after Ghaddafi. That window closed when the Russians came in.
– I suspect what Obama had in mind after the earlier gas attack was similar to what Trump did last night. I wouldn’t be surprised if the Pentagon dusted off the original 2013 plans.
– We coordinated with the Russians before last night’s attack? Well, duh.
– We are constrained in what we can do so long as the Russians are there. Hit them, we might as well declare war on Russia. How many easy targets remain, ones where we can damage Assad’s war machine while minimizing chances of Russian casualties?
– What to expect from Russia now? I think strong words but not much else. Trump is their man in the White House, so up to a point what’s good for him is good for Russia.
– If Assad reacts with another gas attack, what do we do next?
– Personally, I think hitting the air base was necessary. Obama should have done it in 2013 without Congressional approval. 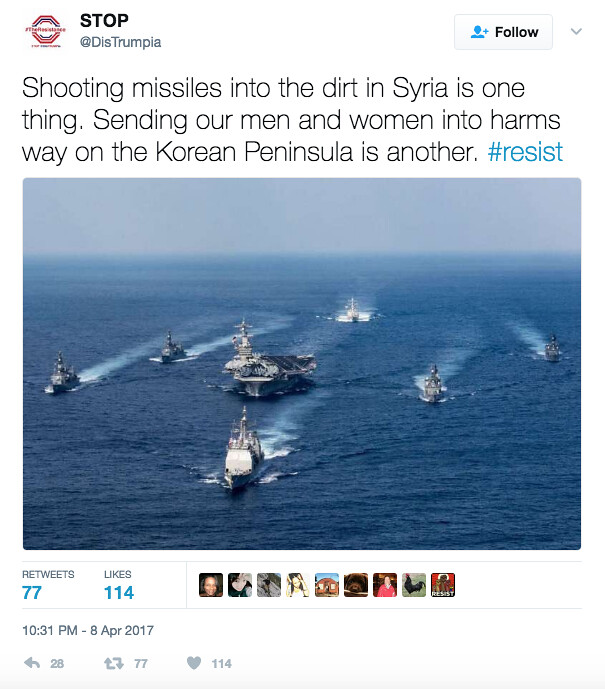 This is the kind of hyperbolic over-reaction I was talking about in the original post, above. We have not “mobilized for war in Korea,” we’re not calling up the reserves, we have not deployed the US Navy to attack Kim Jong Un. We had a carrier task force in WESTPAC. It sailed off Korea last month and was making a port call in Singapore en route to Australia. Now it has been sent back into Korean waters.

This is basically normal. Thousands of American troops and their dependents are in harm’s way on the Korean Peninsula. They have been since the armistice in 1953 ended active hostilities there. US Naval forces are constantly in Korean waters or nearby. Sending the USS Carl Vinson back to patrol off the coast seems prudent to me, but hardly any kind of escalation.

Re Syria: as additional information about the cruise missile strike on the Syrian air base comes to light, I have to say I’m disappointed. I favor strong and decisive action against Assad. This wasn’t it. We warned the Russians beforehand, and the Russians warned the Syrians, and with all we know about Russian meddling in the 2016 presidential campaign, it looks more and more like something cooked up between Putin and Trump to reverse Trump’s march toward impeachment.

Lotta shit happening, and it’s impossible to stay ahead of it. Waiting and watching now.

2 thoughts on “Bring Me a Pepsi, This Is Getting Good (Updated)”