Lying Liars of the Left? (Updated)

Fake news? Both sides do it!

I hate “both sides” bullshit, but sometimes it’s true. This alarming headline from yesterday and today, for example, spread all over news sites and social media:

The story originated early Thursday on the notorious white supremacist site Breitbart News, where the emphasis was on how an evil Jewish family shut down a high school production of A Christmas Carol by lodging a complaint over Tiny Tim’s closing line, “God bless us everyone.” That’s the version of the story spread on the right. Later, lefty sites and media picked it up, changing the emphasis by reporting that the family in question had been threatened and forced to flee.

Then, sometime yesterday afternoon, the Anti-Defamation League debunked both the conservative and liberal versions of the story. The school had indeed canceled the production, but the family had nothing to do with that. Nor had the family fled. 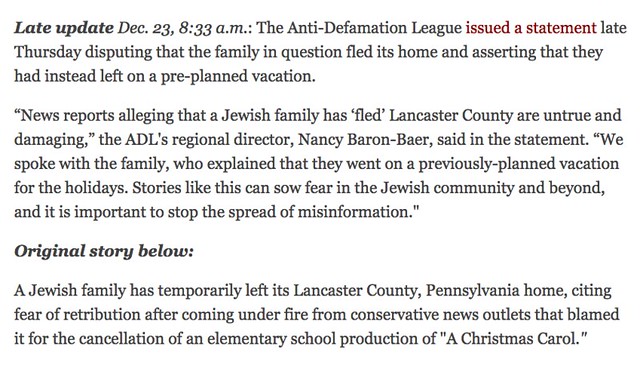 Thing is, as of this morning Talking Points Memo and other lefty news sites are still flogging the story with yesterday’s lying headline. You don’t get the truth until you click on the lie, and how many readers ever click? Most of us just skim the headlines, and most of us probably still believe a Jewish family was forced to flee its home.

If all you did this week was skim headlines, you probably believe a group of young men was forced off a Delta flight for speaking Arabic. You probably believe anonymous thugs chanting “Trump, Trump” ripped the hijab off a Muslim woman’s head in New York City. Both stories were breathlessly flogged on news sites and social media. Both stories were lies: the men on the plane provoked the incident for a YouTube video; the woman made up the thug story to avoid punishment from strict parents after missing curfew. How many of us ever saw the retractions?

That’s the long-term arc of justice argument. Here’s a more practical, immediate reason we shouldn’t copy the right’s “big lie” tactics: one false hate crime claim knocks the legs out from under a hundred true ones. After this week’s hate crime stories were debunked, I’m going to be skeptical of any and all future hate crime claims, even though most of them will turn out to be true.

Update (12/27/16): Josh Marshall, senior editor of Talking Points Memo, is sticking with the “Jewish Family Forced to Flee” story I commented on at the top of this post. In a blog post he examines discrepancies between the story as first reported and the Anti-Defamation League’s rebuttal. It turns out the original story is hardly “fake news,” and that the ADL’s rebuttal amounts to hair-splitting. Here are the main points:

So, basically, it really happened. Maybe the family didn’t technically “flee,” but they were threatened and did leave home. All I can do at this point is offer my apologies to Josh Marshall and Talking Points Memo. He had it right in the first place, and I should have known better. Anti-Semitism and other forms of racism are rampant in our society, and one has to give the benefit of the doubt to those who report hate crimes. With rare exceptions (like the Muslim woman I mentioned who falsely reported a hate crime to cover up the real reason she got home late) victims aren’t lying. If anything, they’re sugarcoating the truth.

Sadly, I fear we’re in for an explosion of hate crimes in this country. And we all know why.

2 thoughts on “Lying Liars of the Left? (Updated)”