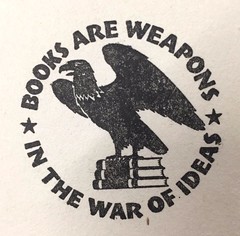 The election of Donald Trump has emboldened those on one side of the culture war: xenophobes, nativists, white supremacists, misogynists, Christian dominionists, gay-haters, authoritarians. These are the people who traditionally target and attempt to suppress “objectionable” books and ideas: we can expect to see a dramatic escalation in attempts to ban books on school library shelves and reading lists.

Beyond book banning, we may see the return of organized book burnings (not that book-burning has ever gone away). Given the proclivities of “alt-right” racists riding in on Trump’s coattails, non-compliant teachers may find themselves the targets of witch hunts.

What can those opposed to book banning do? More of what we have been doing: sharing news of challenges and attempts to ban books, showing up at local school board meetings to defend books, teachers, and meaningful education; organizing banned book giveaways in communities that have succumbed to the forces of darkness. If we don’t want to lose the freedoms that define us as Americans, we must be prepared to fight back.

Every time I scan the news for items to include in YCRT! columns, I see example after example of people doing just that, fighting back and often succeeding. You’ll see it in several of the cases I cite in this edition of YCRT! Because of that, I’m encouraged, and you should be too. There are a lot of good people on our side of the culture war, and when we fight to prevent the banning of books and suppression of ideas, we win more often than we lose.

Oh, here we go with this shit again. Did you know that a certain racial slur appears 219 times in “The Adventures of Huckleberry Finn” and 48 times in “To Kill a Mockingbird”? After one parent counted ’em up and complained, the Accomack County (Virginia) public schools superintendent unilaterally pulled both books from classrooms and libraries, never mind the school district’s policy of retaining challenged books pending formal review. After the banning sparked anti-censorship protests, the school district decided to follow its own policy: it reviewed and reinstated both literary classics.

“The inundation of obscenity and pornography has a numbing effect, and now it’s making its way into our assigned educational material for minors.” Can you guess what book this parent in Dubuque, Iowa is challenging? If you guessed “The Perks of Being a Wallflower,” you win. Here’s the good news: a school district committee made up of teachers, parents and students unanimously voted to retain the book.

In Taunton, New Jersey, parents challenged Adam Bagdasarian’s “First French Kiss,” assigned as optional reading for school students. As with the challenge in Dubuque, the school district reviewed the book and decided to retain it.

“We can’t have 18-year-olds reading about masturbation or sexual issues, regardless of the literature. I don’t care if it’s from Dickens or who else.” So says a member of a group of Lemont, Illinois parents who challenged books on a high school’s English class reading list (the books include Arundhati Roy’s Booker Prize-winning novel “The God of Small Things” and Maya Angelou’s “I Know Why the Caged Bird Sings”). The principal caved, stating that the books contain “subject matter in some sections that is not appropriate for our students,” and that “The books have been collected and will not be used again.” Even worse, now that the principal has banned the books, parents are demanding the banning of any books containing “literal, metaphorical, figurative, or allegorical” allusions to sex.

Highlights has announced it will depict families with same-sex parents in its magazines for children. An organization calling itself “One Million Moms” is calling on conservative parents to cancel their subscriptions.

In a previous YCRT!, I linked to a story about police arresting a citizen and a librarian who exercised their right of free speech during a public event at a Kansas City library. The author of this editorial response on the American Library Association’s Intellectual Freedom Blog says the incident triggered paranoid thoughts. I don’t think he’s being paranoid at all.

The Koch brothers’ super PAC, Americans for Prosperity, has on five recent occasions attempted to defund public libraries in the USA. An organization called EveryLibrary is fighting back and could use our help.

I was fascinated by this article in The New Yorker, detailing how book publishers in America took on long-standing taboos and laws against obscene books, among them Henry Miller’s “Tropic of Cancer” and William Burrough’s “Naked Lunch.”

And, lest we forget, this: