“like many families, everyone wandered around like children in a funhouse—they could hardly see one another around the corners, and what they could see was completely distorted.” 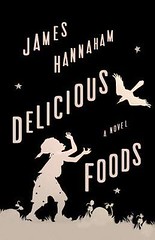 Seems like everyone wants to talk about the most interesting character in the book: Scotty, the personified voice of Darlene’s best friend, crack cocaine. That’s understandable: Scotty’s the devil on Darlene’s shoulder, an engaging incubus (but one who never shuts up).

Scotty sets this novel apart, but what reverberates most strongly with me is the echo of “The Jungle,” Upton Sinclair’s 1906 novel about the horrific conditions and exploitation of immigrant labor in the meat-packing industry.

Slavery never went away, even in the West, even in the USA, but there aren’t many contemporary novels about it. From sweat shops to prison gangs to sex trafficking to the forced agricultural labor described in “Delicious Foods,” slavery is all around us, preying on impoverished immigrants and minorities, rigged so that almost no one can ever lift themselves out of it. Importantly, the slavery described in Hannaham’s novel is based in fact. Indeed, I suspect the author’s main purpose was to write about forced agricultural labor. In an LA Times interview, he said this:

[These farms are] something that I feel like nobody knows about and everybody ought to know about: The fact that this sort of thing has been perpetrated in our modern era, that there are these people who will victimize people who are already being victimized, and spirit them away to these places and make them work for no money, and keep them on drugs the whole time.

Also note he didn’t name his novel “Darlene,” “Scotty,” or “The Boy with No Hands.” He named it “Delicious Foods,” and I’ll never eat another watermelon without thinking of it.

A lot of the novel is written in dialog, through the voices of Darlene, Eddie, and of course Scotty. Hannaham has an Elmore Leonard-like gift for this and it is not off-putting in the slightest. I have a congenital aversion to magical realism and there’s a trace of it here in the handlessness of Eddie, who manages to escape Delicious Foods in a car moments after both his hands are sawn off by a drunken crack addict with a circular saw, somehow managing not to bleed to death ten miles down the road but to make it all the way to Minnesota, somehow figuring out how to pay for and pump gas (and where did the money come from?), and I won’t even speculate how he managed to go to the bathroom or pull up his pants afterward, but never mind, Eddie makes it and even prospers.

If from this review you get the impression this truly awful tale of slavery and addiction and hopelessness is also funny, well, you’re reading me correctly. But it is humor at its blackest.

“Delicious Foods” is an unexpected surprise: important, moving, mordantly funny; in addition to “The Jungle,” I frequently thought of Joseph Heller’s “Catch-22.” 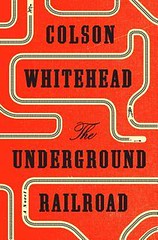 It wasn’t hard to accept Whitehead’s conceit of the Underground Railroad as an actual subterranean network of tracks, trains, and secret depots, built and maintained by abolitionists to convey escaping slaves northward. Nor was it hard to accept Whitehead’s other ahistorical conceits: an antebellum South Carolina that harbors escaped slaves and attempts to educate them while at the same time sterilizing females and injecting males with syphilis; next door a North Carolina that has outlawed black slavery in favor of indentured servitude by Irish immigrants, in effect outlawing black people altogether; farther north an Indiana where black freemen and escaped slaves are briefly allowed to buy property and run businesses, then slaughtered for being successful.

Some of these things happened, though much later than the pre-Civil War setting of this novel; some were never more than the harebrained ideas of Back-to-Africa movement leaders … but together they paint important aspects of the slave experience in America, and surely that is a good thing for us to understand.*

The net effect of Whitehead’s wide-ranging excursions from actual history, though, is to make Cora, the slave at the center of his story, less a person than an allegorical figure. I never took her for more than a paper cutout, there to illustrate the horrors of slavery and the courage of the few who escaped it. So too the plantation owner; so too the bounty hunter; so too the various figures connected with the underground railroad.

*The New Yorker, in its review of “The Underground Railroad,” points out that the actual network of abolitionists and sympathizers we commonly call the Underground Railroad did not exist in the southern slave states, only in the north, and that very few southern slaves actually did escape, with or without assistance from that network. Most of those who achieved freedom bought their way out of slavery and remained in the southern states. In the north, to America’s eternal shame, federal law treated escaped slaves as fugitives, and helping or harboring them was not only illegal but harshly punished.

I’ve been reading up on the air war in Vietnam. I flew USAF fighters for 24 years but never saw combat. It’s a hole in my experience. Ed Rasimus writes about flying they way I try to, in a way that explains things simply to readers who don’t share a military or aviation background, yet authentic enough to hold the attention of those who do.

This is Rasimus’ second memoir of the Vietnam air war. He served two 100-mission combat tours there, the first flying single-seat F-105s in the late 1960s, the second flying the two-seat F-4 in the last year of the war. This memoir covers the second tour; I’ll probably read the earlier memoir soon, since my own background is in single-seaters.

I was most impressed by Rasimus’ honest, straightforward approach to discussing his marriage and sexual activities while away in Thailand. Most aviators turned writers are too prudish to cover this aspect of the fighter pilot life.

I was also impressed by how well Rasimus integrated the larger story of the Vietnam air war, the decision-making and strange restrictions imposed by political and military leadership, by writing about it as it affected the men he flew with. No polemics, no rants, but the kind of knowledge military pilots would have had to understand to do their job, because higher level decision-making had a direct impact on how Rasimus and his peers fought the war: fighter pilots and backseaters were the ones taking the war to the enemy in North Vietnam, and the effect of restrictions was immediate, severe, and often fatal.

Another Goodreads reviewer commented that anyone interested in pursuing a career as a military fighter pilot would get a lot out of this book. I think that’s a good point. Sure, much has changed. Then again, not much has changed at all. The lieutenants and captains who lived through Vietnam were the majors and lieutenant colonels running flight training and fighter squadrons in my day, and everything we did was based on what the USAF had learned in that war. That generation is living in retirement now, but when I myself retired in 1997 the USAF (and the fighter pilot business) was still modeled very much on the way we did things in Vietnam. Add lessons learned in Desert Storm and subsequent campaigns, and I bet it’s still much the same. 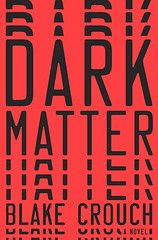 This one’s sort of a science fiction mystery, centering around the simultaneous existence of many realities, each one branching off another, and a scientist’s attempt to find and return to his own reality and the people he loves, after his abduction by … well, one mustn’t give it all away.

I enjoyed the book, but I’m not absolutely raving about it. Some of the alternate realities were interesting and I wish Blake Crouch had spent more time exploring them. I thought the convergence of Jasons (you’ll have to read the novel to find out what that’s about) in the final section was interesting, but didn’t find it as mind-bending as other reviewers seem to have. In fact I thought the resolution a bit too easy, a bit too contrived.

It’s a very fast read, though you may find it dragging a bit toward the end. I did, but only because I sensed how the author was going to wrap it up and was impatient to find out if I was correct. I resisted flipping ahead, though. Most of the author’s themes have been explored in other works of science fiction, and in the end I didn’t think any new ground had been broken. I was entertained, not blown away. 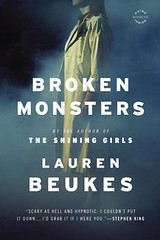 Lauren Beukes, at least on this, our first encounter, reminds me of Mo Hayder.

Which is to say I’m very favorably impressed by the writing in “Broken Monsters.” As with Mo Hayder, Lauren Beukes’ characters are sympathetic and well-drawn; her villain twisted and grotesque, horrific almost beyond imagining. That leaves the plot, which teeters between believability and fantasy. Without getting into detail, “Broken Monsters” revolves around a Detroit detective, her teenaged daughter, and a cast of supporting characters swept up in a series of ritualized killings. The killer isn’t merely satanic, he’s under the control of a supernatural force, which is where the fantasy comes in.

Normally, when an author slips into fantasyland, I’m done, but Lauren Beukes was good enough to keep me flipping pages. That’s because her non-supernatural characters, everyday people going about their lives and jobs, were so realistic; because the detective and police procedural aspects of this novel were so convincing. That’s because the Detroit she depicts is the Detroit I remember. I was willing to swallow the supernatural bits and finished this thriller in almost record time.

Next for me: Lauren Beukes’ “Moxyland.” 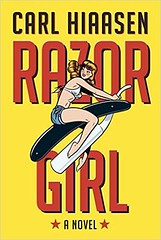 This is the Carl Hiaasen I remember from early novels, having fun with improbable plots and eccentric but likable characters. He’s back in form after recent disappointments, which is to say if you fondly remember “Strip Tease” or “Native Tongue,” you’ll be more than pleased with “Razor Girl.”

As for this latest novel, what can be said? Florida Man and Florida Woman take on reality TV, con artists, and the Mob. It’s a hoot (see what I did there?).