Someone Please Pass the Oil of Cloves 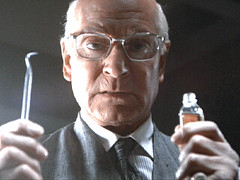 An upper molar is bothering me, the same tooth that drove me to endure endodontic torture in June. It’s acting up again and I’m going to have to call the dentist to see if he can work me in.

As a metaphor for tonight’s debate between Hillary Clinton and Donald Trump, an aching tooth seems about right. Just as the root canal in June didn’t end my dental problem, I worry Hillary’s win in November won’t put a stop to this dreadful, marathon-length campaign.

Two days ago I went on a Facebook tear over Trump’s pre-emptive claim the election is tipped in favor of Clinton. He’s talking up election-rigging because he knows he’s going to lose, but along with better thinkers than myself (including President Obama), I worry such talk will undermine confidence in the USA as a nation of laws and potentially end a long tradition of peaceful transfers of power.

Last night Bree Newsome, the activist who climbed a flagpole outside South Carolina’s statehouse to tear down a confederate flag, posted some disturbing thoughts on Twitter. She reminded her readers that our long tradition of peaceful transfers of power isn’t really all that long, citing the election of Lincoln in 1860 after another contentious campaign with race at its center, and the Civil War that broke out a year later. We suppress historical memory, she said, for the sake of upholding national myths.

Well, that’s depressing, more so because it’s true. There are glitches in the matrix of our nation; whatever unrest may result from Trump’s defeat will be another. Nothing I can do about it. Nor you, nor you. It’s going to have to play out, and I hope not too many bystanders will be hurt.

Yeah, a toothache will turn one’s thoughts in a dismal direction.

One thought on “Someone Please Pass the Oil of Cloves”