Race War? Not Yet, Real Americans.

A big problem with American gun culture is how much of it is driven by racism and fear of—or eagerness to engage in—race war. I started thinking about this Thursday night, when live reports about shots being fired during a protest march in Dallas began popping up on Twitter. Within minutes of these initial reports, when people were still saying four gunmen on top of a parking garage were taking coordinated shots into the crowd, a former US congressman posted this: 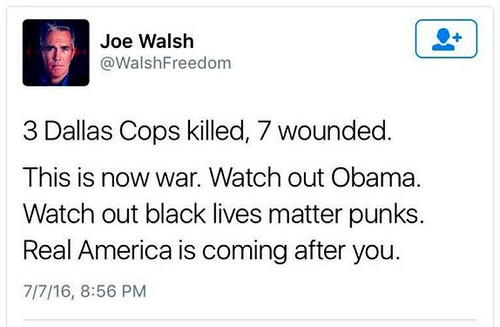 He quickly deleted the tweet, but several readers took screen shots while it was up. Here’s a guy eager for race war. Based on minimal information, hysterically reported and mostly wrong, he takes a read on the situation and knows who’s responsible. He’s itching to start shooting black thugs. Just as soon as he finds him some brave Real American white knights to lead the charge while he hides behind them.

It’s best to cool your jets when mass shootings happen. Initial reports are almost always wrong. Friday morning I said on Facebook I’d resist reacting to thuggish posts about the shootings in Dallas. I had former Congressman Joe Walsh’s tweet in mind. At the time Walsh posted it the shootings were still going on and the gunman or gunmen (no one knew) could have been anyone, even ISIS-inspired terrorists trying to take advantage of the confusion created whenever there’s a big protest march (adding to the confusion, about 20 open-carry assholes were participating in the protest march, rifles strapped over their shoulders … it’s a miracle they all weren’t shot dead on the spot by the police).

Now we know the death toll is six: five police officers and the gunman. Nine others, seven cops and two civilian bystanders, were wounded by gunfire. We now know there was just one gunman, not four. And he was shooting on the ground, not from on high in the parking garage. The parking garage is where he was eventually cornered, then killed after a lengthy standoff.

Even this information may change. Dallas police arrested three other suspects, and as far as I’ve been able to determine, they haven’t released them yet.

I’ve heard Muslims say, whenever there’s a mass shooting, they pray the shooter’s name doesn’t turn out to be Ibrahim, and I know what they mean. I hoped the Dallas shooter wouldn’t turn out to be a black man gunning for white cops, and then he turned out to be just that. The attacker, according to Dallas Police Chief David Brown, was “upset about the recent police shootings” and “said he wanted to kill white people, especially white officers.” Which, in the minds of Joe Walsh and other mouth-breathing racists, means the entire Black Lives Matter movement wants to kill whitey, so grab your guns boys. And you black guys? Don’t you dare grab yours, because everyone knows gun rights are for whites only.

Fraught times. But we’ve been here before. We’ve always been here, from the days of slavery and fears of slave uprisings to the Jim Crow era to the Black Panthers in Oakland in the 60s and 70s.

You know, it’s possible to hate how police kill black men, women, and children for minor crimes or no crimes at all, and still hate cop killers. It’s possible to support the goals of the Black Lives Matter movement, and at the same time support the men and women in law enforcement.

Who says it has to be one or the other, that if you support the cops you have to STFU about them killing black people left and right? The Joe Walshes of the world, that’s who. And fuck them.

An interesting side issue is growing concern over the method used by Dallas police to kill the gunman in the parking garage. When it became clear he wasn’t going to surrender and that sending police in after him would likely result in more policemen getting shot and possibly killed, they rigged explosives to a remotely-controlled bomb removal device and maneuvered it close enough to the gunman to set it off and kill him.

The media’s been calling the device a robot, and yeah, that’s what these things are commonly called, but they aren’t robots and good reporting should make that clear. Uninformed and credulous people, based on what I see on social media, are already making Skynet comparisons and wondering about the morality of using such a devilish device.

Science fiction robots (which, sadly, some people need to be reminded don’t exist) are autonomous machines with artificial intelligence capable of acting on their own: the murderous robot from that Will Smith movie, Optimus Prime from Transformers. Actual robots, the kind that exist today, are the sorts of machines used to make automobile engines and frames, devices programmed to do repetitive tasks with minimal human supervision.

A bomb disposal robot is not a robot, per se; there’s a live human controlling it, telling it where to go and, in this case, when to detonate the explosives it’s carrying. It’s just a tool, and I don’t see any moral issues with its use. The guy wasn’t going to surrender, he was still armed and presumably had plenty of ammo remaining, and additional policemen might have been killed if they tried to take him by hand. I don’t have any issue with the police killing a perp in a situation like that, and it’s not like they didn’t try to talk him down first.

One thought on “Race War? Not Yet, Real Americans.”