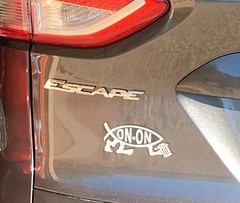 This is a hash fish emblem. It’s a Hash House Harrier thing. We once bought a dozen, giving some to friends who are also hashers but keeping several for our own cars. Two of my motorcycles and at least six of our cars and trucks have sported hash fish. Currently every vehicle in our garage and driveway has one. The one in the photo, which I just put on Donna’s new car, is our last.

When I posted this photo to Facebook last night I commented that running out of hash fish means we’ve officially bought our last car. I said that because when I tried to order more hash fish a few months ago my order was cancelled, so I assumed the hasher who used to sell them was out of business. He piped up in the comments, though, to say he’s still selling them, so maybe I’ll buy a couple more. I don’t have one on the motorcycle trailer, after all, and at the rate Donna’s wrecking cars who knows how many more we’re going to need before they put us in the home and take our keys away?

The basic fish emblem, sometimes called the Jesus fish, originated with fundamentalist Christians, who feel they own it and are offended by the proliferation of sacrilegious variations people put on their cars. I was at a stoplight once when a guy got out of the car behind me, walked up to my driver-side window, and asked me if that was a beer in the fish’s hand. I said it sure was, and started to explain hashing, but he turned away in a huff and stomped back to his car. That’s when I decided to put hash fish on all our cars.

Things are quiet now that our grandson Quentin is back in Las Vegas. Polly’s working at Ace Hardware, Donna’s going to sewing classes, I’m doing my volunteer thing at the air museum. It’s too hot outside to consider doing much else, so we’re catching up on our reading. Speaking of which, if you’re looking for a good beach read, may I recommend M.R. Carey’s The Girl with All the Gifts?

I periodically notice our 20-year-old cat doing new things. She never did new things until she was about 18, when she started sleeping in the bathroom sink. These days she can’t jump, so no more sink. She sleeps on a towel on the floor of the guest bathroom, except for when she’s prowling in the dark, yowling like a banshee getting a root canal. Lately she lays down next to the dogs on the couch and naps with them. This morning I found her stretched out in front of the water bowl, almost as if she was trying to keep the dogs from getting a drink. That would be very like her.

Have you been paying attention to the civil suit a woman is trying to file against Donald Trump and the financier Jeffrey Epstein, claiming they raped and sexually abused her over a period of days in 1994, when she was 13 years old? This is lurid stuff: according to her, a procurer working for Mr Epstein talked her into attending a party where she might meet people who could help her get started in a modeling career. The party was hosted by Epstein, who introduced her to Trump and then kept her as a sex slave. Over a four-month period both men raped and sexually abused her, after which Trump and Epstein threatened her and her family with bodily harm if she ever talked about it.

She finally came forward earlier this year. Her first attempt to file a suit was rejected, but now she’s filed again in a different state, this time with a corroborating eyewitness to back up her claims: the very woman who was Epstein’s procurer (Epstein, by the way, is a convicted sex offender who once served 13 months for soliciting girls as young as 14 into prostitution). The statute of limitations for sex crimes ran out long ago, but the woman is claiming duress as the reason she couldn’t come forward sooner: the threats Trump and Epstein held over her and her family.

Damn, that’s serious stuff, if true. When someone is accused of a decades-old sex crime, it’s nearly impossible to nail down facts, and the accused almost always is given some benefit of doubt. Which probably explains why this woman’s allegations about Trump and Epstein aren’t plastered all over the front page of the New York Times or leading the nightly news on CBS, NBC, ABC, Fox, MSNBC, CNN … oh, I’m sure you see where I’m headed here. If Hillary does something even slightly questionable, it leads. If Trump is accused of rape, it’s crickets.

Do you ever wonder why that is?

People (by which I mean some people) seem disappointed Hillary Clinton wasn’t frog-marched off to jail, her hands manacled behind her back, through a gantlet of jeering Republican congressmen, Bernie Sanders supporters, and Donald Trump brownshirts. But they may be forgiven; that’s what the media led them to believe would happen, after all.

Although we’ll never hear the end of this email thing, I don’t think it’s hurt Hillary’s chances in the election. Her supporters will remain loyal and she should win handily. Where it’ll hurt her is down the road, once she’s president. I fully expect a new round of congressional investigations, this time focused on email rather than Benghazi, to dog her throughout her presidency.

The bigger question is whether a GOP-majority congress will be more willing to work with President Clinton than it has been willing to work with President Obama. I suspect not. Her use of a personal email server to conduct State Department business will be the excuse, but any other excuse would do. You know what, though? Even with Congress blocking, undermining, and sabotaging him at every step, Obama got some major shit done. I think Hillary will too.