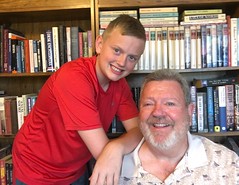 Q, our grandson, has been here the past week, bunking in our home office. I barged in this morning to check email and update the blog. While I was at it, we took a selfie.

It’s been a domestic week, watching young people’s stuff on TV (Battlebots, which was too frenetic to endure; Zootopia, clever and cute), hauling Q to and from Desert Museum camp outings, taking care of household business (which yesterday included jump-starting the truck and driving to the corner auto parts store for a new battery … you already know about our more serious car trouble). Before barging into Q’s room just now I replenished the outdoor bird feeders and raked up dog poop in the back yard. Busy busy busy.

Q flies home tomorrow. We’ll miss him. I’m arranging another motorcycle mini-Gypsy tour in November and will see him again when I pass through Las Vegas. Actually I may be overnighting in his room, since I’m planning to meet up with my son Gregory, Q’s dad, who’s coming with me on the motorcycle trip. We’re going to an aviation museum in Chino, then to Lone Pine, then through Death Valley back to Sin City. Donna hasn’t decided whether she’ll come along and stay in Vegas while we’re riding. If she does I’ll trailer the Goldwing from Tucson to Vegas and back home again; if not I’ll saddle up and ride the entire route.

They’re putting solar canopies over visitor parking at the air museum. I don’t think the volunteer parking lot will get them, and that’s a shame. Every outdoor parking lot in the Southwest ought to have solar covers. I wonder what Hillary’s position is. I’d love to see federal solar panel incentive programs for homeowners come back. Neighborhood association be damned, it’s time we all put solar panels on our roofs.

I’ve been on the phone with Barnes & Noble. Q gave me a B&N gift card for fathers’ day and I used it to buy three e-books on my want list. I haven’t used my Nook reader for at least two years, ever since I started using Donna’s Kindle (which weighs less and has a longer-lasting battery). Since I switched to the Kindle I’ve been getting all my e-books from Amazon. Thanks to the gift card, I’m back with B&N and the old Nook, but there’s a problem: the e-books I bought won’t download to the Nook.

B&N says it’s because when I updated my default payment credit card it didn’t take (after using the gift card, I still owed a buck and some change). Which is odd, since on the “my account” screen on our desktop computer at home, the new card shows as the default. After assurances the problem will be fixed and still unable to download the books, B&N is now sending, gratis, a replacement Nook, a newer & better model than the one I have. Huzzah!

Another thing I did this morning was to write a review of the book I finished last night. Looking at the log I see there are six new book reviews in the can. That’ll be my next blog entry, another installment of Paul’s Book Reviews.

I don’t know what to think about Britain’s vote to leave the European Union. Maybe there are some things that shouldn’t be put to a popular vote.

You’ve heard of the Doomsday Clock, where midnight is nuclear war and the hands of the clock move closer to or farther from it depending on the geopolitical situation? I’m picturing a clock where midnight is labeled “Germany starts another world war.” With a strong EU the hands never got closer than 11:45 PM … now it’s 11:55. I’ll wait to see what happens. And not look at our 401K!

I can’t do a damn thing about politics, racism, and ignorance. All I can do is try to make my little corner of the world a kinder place, and disassociate myself from the Thunderdome rabble. When it comes to that lot, I’ll take Einstein’s advice: “Make believe all the time that you are living, so to speak, on Mars among alien creatures and blot out any deeper interest in the actions of those creatures. Make friends with a few animals. Then you will become a cheerful man once more and nothing will be able to trouble you.” A more elegant way of saying to keep your own council and not get caught up in the tumult of mobs and the delusions of conspiracy theorists.