Magic 8 Ball No Use at All (Updated) 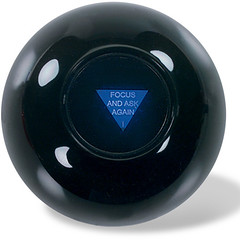 When I blogged about our automotive history a few weeks ago, I thought it’d be years before we had to buy another car. I may have to update that post.

Donna called yesterday afternoon. She had drifted off the road and hit a cactus. After ascertaining that she was fine, my second question was whether she hit a saguaro. Saguaros are endangered and protected; you’re in a heap of trouble if you mow one down. Nope, just a prickly pear. Dime a dozen, those.

Donna said she was going to stop at our mechanic’s shop on the way home because the check engine light had come on momentarily. That was a bit of new information; more new information came to light later. The mechanic put the car, our 2007 Chevy Trailblazer, on the rack and said we’d better call our insurance company. It wasn’t just a cactus, there were also some rocks. Big rocks. Apparently the damage underneath is extensive. He said it wasn’t safe to drive, but Donna drove it home anyway.

The car looks okay if you don’t count the fresh collection of Arizona pinstripes, a missing rear view mirror (more new information!), and tires bristling with cactus spines, but I haven’t crawled underneath. I don’t know the car’s current value, but if the cost to repair it is more than it’s worth, USAA will write if off as totaled. Magic 8 Ball says Outcome Uncertain; the appraiser’s due by in about an hour.*

Polly drove the old Lincoln to Phoenix today for yet another interview with an HR outsourcing company. She just got home and said it looks good, but the man who interviewed her is not the final decision maker. She may need to drive to Phoenix again for more interviews, a scenario we now know well. We were planning to give Polly the Lincoln, but Magic 8 Ball says Not So Fast.

Meanwhile, grandson Quentin is at a Sonora Desert Museum-sponsored summer camp on Mount Lemmon. That’s actually a bit misleading … there’s no permanent campsite, like the ones I went to as a kid. They spent all day Monday with the animals and plants at the Desert Museum and slept that night in one of the museum buildings (it being too hot to camp under the stars as originally planned). Today they’re hiking on the mountain and camping overnight up where it’s cool. When I dropped Quentin off at the pickup point this morning I instructed him to say hi to the bears and mountain lions and not to forget they can smell our fear. I think he has another day and night somewhere else with this moveable camp, but I’m not clear on where. The lad flies back to Las Vegas this weekend, only to leave a day later for a “real” summer camp in California with his Boy Scout troop.

I went back to my regular dentist after dropping Quentin off this morning, and now have a permanent filling in the tooth that got the root canal two weeks ago. I’m getting little electro-metallic twinges, the kind you get when a bit of foil wrap sticks to a candy bar. They tell me that’ll pass soon. It had better.

I’ll close with an unrelated observation: I’ve learned not to talk about Game of Thrones to strangers. Thousand-yard stares, every time. I thought everyone watched GoT!

* The appraiser’s here now. Says a frame cross-member is missing and one of the wishbone struts is bent. Says the frame is a little bent as well, and the oil pan, while not visibly leaking, has fresh oil on the outside and probably a hairline crack. He’s iffy on balance between what the car’s worth and what it’ll cost to fix it: the engine has to be pulled to install a new cross-member, for example, and that’s major money.

Update (6/23/16): The adjuster said the car’s worth fixing, so we got a green light to start work on it. It’s at the repair place now and we have a rental to use while it’s being worked on, covered by USAA (less our $500 deductible, of course). I drove it to the garage this morning and it was barely drivable … I’m surprised Donna didn’t call for a tow truck right after she hit those rocks on Monday.

Update (6/29/16): Bad news. The adjuster called again, and the car has been totaled after all. Driving by later to remove the license plate and look for any additional personal items we may have left in the car. Looks like we’ll be shopping for a replacement car.