Last Thursday Donna and I loaded the truck and trailer and drove to Las Vegas for a long weekend with the kids and grandkids. Polly didn’t come with us, so not all the kids (we did bring the doggies along, though).

In the truck, out of sight, are our first bicycles, the matching hybrids we started out with ten years ago, on their way to a new home with our son and daughter in law. The motorcycle? Well, duh … it was the weekend of the annual River Run in Laughlin, Nevada, and my son and I planned to participate. For me, it was mostly a motorcycling vacation; for Donna, a chance to see our family and do a little sewing with Beth.

The trip up was fantastic, an eight-hour drive through some of the prettiest parts of Arizona and southern Nevada. The new trailer was great, rock solid under tow, the anchor points and ramp a perfect match for the Goldwing. The dogs, as always, were excited to go, and once we got to the kids’ house they fit right in with their other family.

Gregory picked up his rental BMW Friday. We planned to ride to Laughlin Saturday, the last official day of the River Run, but it rained heavily until two in the afternoon, too late to ride down. We rode out to Blue Diamond and Red Rock late in the afternoon, and had to ride home in a heavy downpour as the last big thunderstorm cell passed over Las Vegas.

Luckily, Gregory was able to extend the BMW rental through Sunday, which turned out to be a perfect day for our ride. We left Las Vegas early, stopped for breakfast at the little airport-slash-casino at Cal-Nev-Ari, then rode over the hill into Laughlin.

Although River Run was officially over, there were still plenty of motorcyclists on the road and in town, even a few vendors still open for business. I looked at a leather vest, hoping to find a steal, but when I put my hand in the pocket there was a hole in it and it dawned on me for perhaps the millionth time you get what you pay for. Gregory bought a sleeveless biker shirt, the only one he could find that didn’t have a Harley on it. Oh, did I mention out of the hundreds of motorcycles we saw on the roads in and out of Laughlin, all but three were Harleys, and two of the three were our own rides?

Here’s a short GoPro video of us leaving Laughlin: 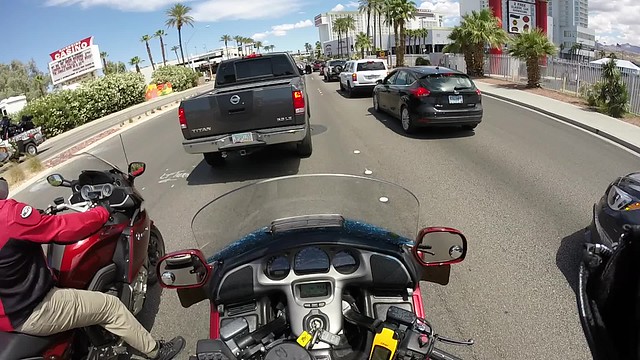 We rode home via Searchlight, Nevada, then down the hill to Nipton, California. From Nipton we took I-15 back into Nevada and Las Vegas. A nice day’s ride.

While we were riding Donna and Beth went out for manicures, then did some sewing together. Now Beth is talking about coming down to do a little more sewing with Donna, and our grandson Quentin is starting to plan his summer visit. We got to spend some time with our granddaughter Taylor, and even had a lovely dinner with her, which is rare since she works odd hours at a local gym. I wish Polly had been able to come with us. It would have been nice to have our entire family together again, at least for an updated photo. Well … maybe this summer.

Poor Schatzi got into her host dogs’ food the first night and ate so much she was bloated and listless the entire time we were in Las Vegas. She perked up when it was time to drive home, and now she’s fine. Next time we’ll make her wear a muzzle!

The drive home on Monday? Every bit as great as the drive up. Gregory helped me get the motorcycle on the trailer and we were on the road by eight. The doggies are veterans of the Tucson-Las Vegas run and sense when we’re getting near our favorite rest stops.

We’re home now and everything has been put away. Our dogs love to go on road trips, but they love being home again even more, and I guess we’re a lot like them. Donna’s gone to the commissary to stock up on food, Polly is working in the garden, and I’m about to wash the rain and road grime off the Goldwing.

If you want to see more photos and videos, visit my photostream on Flickr. p.s. I didn’t bring the big DSLR on this trip … all the photos were taken with my iPhone.