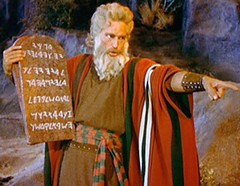 On Monday, one of the other air museum docents told me we had Amish visitors. I said something like “Really? Amish?” and he said, “Well, they’re definitely something. Maybe they’re Mormons.” I was bemused. Don’t the Amish consider museums frivolous? And unless a pair of them in neckties show up at your front door, how do you know you’re in the presence of Mormons?

I figured it out when I walked from the volunteer office to the main hangar. Our “definitely somethings” were Orthodox Jews: men in dark suits with beards and sidelocks, modestly-dressed women with headscarves. The men also wore religious garments, none of which I could name (but which I looked up later: kippah, tallit, tzitzit).

The head of one family, with his wife and children gathered round, engaged me with questions about the museum and some of the exhibits. I was going to ask where he was from, but didn’t. Probably Tucson, because in past years I’ve seen other Orthodox families, dressed the same, walking to services at local synagogues and the JCC, and now that I think about it, usually in the spring. Well, yeah … it’s Passover, which this year is celebrated from April 22nd to the 30th.

If we know so little of other religions, is it any wonder we’re confused about transgenderism as well? Would I recognize a trans person? I think probably I would, but maybe not. Do I know any trans people? I don’t think so. Obviously I’m not qualified to offer opinions on the subject, which means of course I’m going to.

In the past I’ve made fun of social progressives who say it’s silly to worry about straight men posing as women to invade women’s toilets, showers, and changing rooms. This in spite of regular news reports of straight men hiding under outhouses, drilling holes through restroom walls, setting up concealed cameras and two-way mirrors in locker rooms and showers. Of course they’re gonna try dressing up as women to perv in the women’s room, if they haven’t already.

Are there real trans people? People who live as the other sex but who are not predators or perverts? Sure there are. No one knows how many, but a guess is around 700,000 in the USA alone, about the population of Washington DC. Some are trans men, some are trans women. They exhibit the same range of sexual behavior as non-trans men and women. Most trans people, I gather, do not undergo sexual reassignment surgery, but in all other respects live as the gender they psychologically are.

When it comes to public restrooms, most of us would never know if a trans person was in the adjacent stall. As for showers and changing rooms, I’d be very surprised if there’s a single trans woman … a woman with a penis, if all this coded language has you confused … who wants to shower or change in the open with other women, or vice-versa. I don’t think trans people are any kind of threat, in any setting.

The guys who hide under outhouses, peek through holes, and conceal cameras? They’re the threat. They’re not trans people, they’re garden-variety pervs and peeping toms. What are the odds of falling victim to one of them? Far higher, I think, than the odds of ever having any kind of problem with a trans person.

Prince is still all over Twitter and Facebook, so I’ll add to what I said earlier. I was dismayed to learn he had an addiction and probably died because of it, but there are people out there who reacted to Prince’s death by reveling in reports he died of an opiate overdose, and that’s different.

Most of that reaction is racist. The holier-than-thou types are quick to call Prince a junkie, but they never said a thing about Rush Limbaugh’s oxycontin addiction. Some of the negative reaction, though, is the result of being told all our lives that drug addiction is evil, and that being addicted to opiates is the ultimate form of human depravity. And now we expect everyone raised with these values and beliefs not to say anything when famous people die from drug abuse? It doesn’t work that way, certainly not in the USA, where we’re also raised to believe everyone is equal.

I’m a boomer. My musical tastes were formed before Prince broke onto the scene, so I’ll admit I didn’t fully get his music or style. But I know millions loved him, and I respect that. I’m sorry he’s gone. I’m dismayed at how he went.

It’s time I did some work outside. We’re driving to Las Vegas tomorrow to spend a few days with our son, daughter in law, and grandchildren. I’m bringing the motorcycle so that Gregory and I can ride to Laughlin for the annual River Run on Saturday (he’s renting a bike in Vegas). So as soon as I’m done here I’m going to hook up the trailer, put the motorcycle on it, and get it all strapped down for the trip … we want to drive away first thing in the morning. When we get to Vegas we’ll leave the trailer and motorcycle at the kids’ house and drive the truck to our hotel. Oh, we’re bringing the dogs too. They’ll stay at Greg’s, where there are two other dogs (that hotel is looking better all the time). Polly’s staying home with the cats.

So. Time to wrestle with the trailer and motorcycle. Don’t know if I’ll be able to blog again until we get home, but I’ll post updates and photos to Facebook and Twitter. See you soon.

One thought on “Definitely Something”