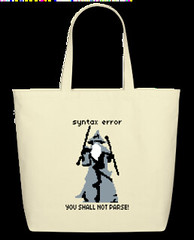 Last Thursday I tried to update this blog with the latest WordPress and third-party plugin releases. Normally that’s the sort of transparent admin action readers never see, but this time something went wrong and for four days all my two readers and I got when we tried to come here was this sad error message:

Sure, a real man would have tracked down that .php file and deleted the unexpected ‘[‘ himself, but have you ever opened a .php file? They contain contain hundreds of lines of code, and good luck finding the needle in the haystack! I took the easy way out and went crying to my server administrator, who patted me on the back, said there there, and kissed my widdle boo-boo.

I should have known that particular plugin was going to cause trouble some day, because it never worked in the first place. I guess that’s why they call them “third-party” plugins, so WordPress can’t be blamed. Well, portfolio-slideshow has been banished, and Paul’s Thing is back from the dead.

Over the weekend a friend invited me to a county library book sale. There’s a central warehouse in town where all the county library branches send older books they’ve taken off their shelves, and once a month or so it’s open to the public. I’ve been looking for a first-edition copy of Jack Kerouac’s On the Road, so I headed for the rare book room as soon as I got inside. The rare book shelves were crowded with rude, pushy people, and at first I couldn’t understand why everyone was being such an asshole, but then it dawned on me they were all looking for books they could resell at a profit on line.

I don’t mind buying books from individuals who sell them on eBay or Amazon. I have a very good friend who does just that, in fact. I just don’t like being physically crowded in tight spaces.

I ran errands at lunchtime and while I was driving heard part of an NPR program called Here & Now. The segment I caught was about transgender people using public locker rooms and toilets. The host of the show and his guests used convoluted language and it was difficult at times to parse (there’s that word again) their meaning, but I gather the issue was women not wanting to use locker rooms or toilets when there’s a transgender person in there walking around naked with a penis and testicles. Or just being in there, naked or not.

The guests, a cis woman and a trans woman, pretended not to understand why people have problems with this, and the host wasn’t ballsy enough to challenge them. Well, I understand. Look, I have a problem pissing if there’s another man in the restroom. If a woman were to walk in, forget it, I’d die of a ruptured bladder before I peed in front of her. Seriously, who doesn’t understand why gender’s a big deal in locker rooms and toilets?

Unisex restrooms are not an issue. There’s only one person in there at a time, and who cares if the person who’s in there now is a woman or a man or a trans person, as long as they clean up after themselves? I don’t think transgender people who have had sex reassignment surgery are a problem either. If trans men and women have the genitals to match the genders they identify as, why even use the transgender label? They are what they are, men or women.

No, what makes us uncomfortable is the thought of men and women sharing locker rooms and restrooms, and by “men and women” we’re not talking about self-identified gender, we’re talking about physical genitalia. Multiply by ten when it comes to kids and teenagers: would you want someone with a dick showering in the locker room with your daughter, even if the school hung up curtains?

It’s impossible to discuss any of this without coming across as a buffoon. Maybe that’s why Here & Now’s host was so mealy-mouthed, and why his guests wanted to pretend only uneducated rubes think there’s a problem with mixing sexes in locker rooms and restrooms. But to the overwhelming majority of us, the thought that genitals don’t enter into gender is a very new thought, one we’re not yet ready to embrace.

I get mad when NPR tries to play both sides of every issue. But this time I felt I was listening to PC transgender propaganda. Where was the voice of the unsophisticated masses, the sexually-repressed rubes who don’t want their daughters showering next to girls who really aren’t girls?

I don’t know, I didn’t hear the show all the way to the end. Maybe later they opened up the switchboard and a few sexually-repressed rubes phoned in. If they did, they probably came across as idiots, as I am doing now.

You think an unexpected ‘[‘ is hard to parse? Oh lordy, try sex.