Last week, during a break between tram tours at the Pima Air & Space Museum, I spent an hour exploring a seldom-visited back lot where we keep retired air tankers and water bombers. These are civil and military aircraft converted to carry and drop water or retardant on forest fires. Most of the aircraft on display have long since been retired by the US Forest Service and its contractors, but at least one Douglas DC-7 is still fighting fires, according to Wikipedia.

This is our Douglas DC-7, a modified civil airliner which can carry 3,000 gallons of water or retardant: 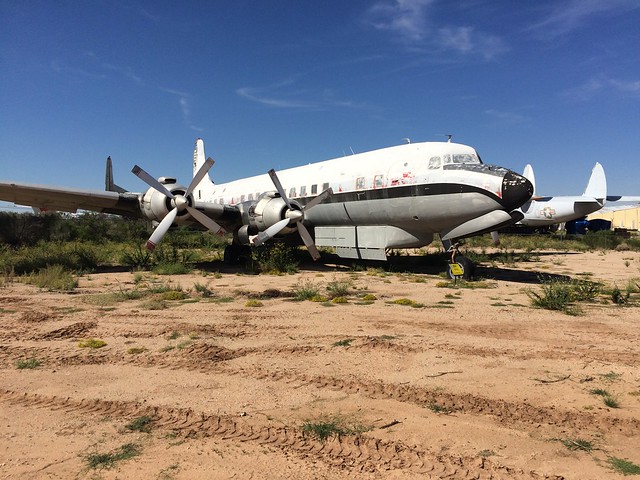 The other air tankers in the back lot are former military aircraft: a Fairchild C-123 Provider, a Lockheed P2V Neptune, a Fairchild C-119 Flying Boxcar, and a Grumman AF-2S Guardian.

The first three are multi-engine aircraft in every sense of the phrase: they’re powered by a combination of piston and jet engines. The Neptune’s supplemental jet engines burned the same avgas fuel used by its piston engines, and were added to improve heavyweight takeoff performance. Intake doors closed when the jets weren’t in use so that the drag of a windmilling engine wouldn’t slow the aircraft down. I believe the same is true of the supplemental jet engines on the Provider and Flying Boxcar. The Guardian, alas, had to make do with a single piston engine (but I bet it’s a big one).

A few things about these aircraft caught my eye and I went in closer to capture some detail:

I can’t resist sharing some other photos I took that day. The restoration yard adjoins the back lot where the air tankers are parked, and there are some fascinating aircraft behind the fence.