I recently reconnected with boyhood friends from Laramie, Wyoming. Okay, we’re senior citizens now, but we’re still friends. One of them, Dave, read some of my Air-Minded posts and decided to forward me this story. I think it’s worth sharing, so here goes:

My brother Jim graduated high school from Benson Polytechnic H.S. in Portland, Oregon, in 1957. He had learned sheet metal work and soon became an automotive body man, and was a damn good one, doing things the old fashioned way, with lead as the filler, none of that new plastic putty for him. But that wasn’t what he really wanted to do. He had learned to fly in Laramie, which was one of the toughest places with its 7,200 foot elevation and constant gusty winds. He wanted to be an air traffic controller, so he joined the Air Force and became a controller. He saw duty at several places in the US, including Truax field in Wisconsin and Ellsworth AFB in South Dakota. He also spent a lengthy tour in Vietnam, and three years in Izmir, Turkey. Not a career man, he got out and went to work for the FAA at Eugene, Oregon. He was fired during the big strike that involved almost all controllers (he wasn’t part of the strike), and it took a couple of years to become re-hired as a controller. During those years he opened a body shop and made more as a body man than as a controller. He finally retired from the FAA at age fifty, and then decided that was too early, so he became a contractor, working the non-FAA tower at Bellingham, WA.

Jim came to visit me in Laramie, and told me he would get there on a Wednesday. He called from on the road on his Honda Goldwing, and said he would be in Tuesday night. I said “Great,” as the next day was Cheyenne day at Frontier Days and I had a half day off. I told him I would take the entire day off, and that Wednesday was the day of the air show. We agreed we would go to the air show, so he could see the Thunderbirds, as he thought he was going to miss seeing them at his usual air show.

We got up early, and drove over the hill, found a place out on College drive to park, and watched the Thunderbirds. Good show from a good vantage point. I asked if he wanted to go to the airport and see some of the static displays. He said sure.

While there, we visited with the pilot of a P-51, out of Idaho I think. That pilot seemed to think that he had talked with Jim when Jim was controlling airspace at DaNang, or Pleiku, in Vietnam, and the pilot was flying an F-4 Phantom.

On the way home, Jim said “I’ve got to tell you my own P-51 story.” He said “There was this old boy by the name of Bill Anders who comes through Bellingham occasionally.” Bill made no bones about it, he did not like Boeing tower at Seattle, but he liked the guys at Bellingham because they knew how to handle high performance aircraft. Bill had made a deal that when he was coming through Bellingham, and flying one of his old warbirds, he would take one of the guys from the tower for a ride.

A friend of Bill’s had bought a Russian Yak, a tail dragger, and the tail wheel was not retracting properly, so he had talked Bill into flying chase plane, to see if he could spot why the wheel wasn’t retracting properly. That was the reason for the trip to Bellingham.

As it turned out, that day Bill flew his P-51 Mustang, and it was Jim’s turn for a ride! Bill came in to the tower and visited, asking Jim what his favorite old aircraft had been. Jim replied “I liked the F-89 Scorpion,” as he had gotten to ride in the back seat in one several times when Jim was at Truax field Wisconsin.

Jim asked Bill what he flew, and he replied that he had worked for NASA for fifteen years, so he flew most of what they had.

Bill’s Mustang had had the fuel tank removed from behind the pilot’s seat, and a second seat put in with stick and pedals, but no brakes or flaps, so you couldn’t take off or land from the back seat, but you could fly it.

He threw Jim some coveralls, and they loaded up and took off. After a little bit, Bill asked, “Do you want to fly it?” Jim said sure, and took over. He said he was amazed that the controls were no heavier than a Cessna. A little while later, Bill asked “Do you want to do some aerobatics?” Jim said sure, so they did some loops and rolls, and finally came back to the airport.

Some of Jim’s church group was at the airport seeing someone off on a mission, or welcoming someone home, and they saw Bill and Jim get out of this P-51 Mustang.

A couple of weeks later, after church one Sunday, a commercial pilot in the congregation came up to Jim and asked “How did you ever get to ride in that Mustang?” Jim, being Jim, tucked his thumbs in to his chest, and said “I didn’t just get to ride in it, I got to fly it!”

The commercial pilot said “No, what do you know about Bill Anders?” Jim replied that he was some old retired Air Force guy. The pilot said “No, he was the guy who took the picture of the earthrise from the far side of the moon. He was the LEM pilot on Apollo Eight.” Jim said, “Well, he told me he worked for NASA—he didn’t tell me he had been to the moon and back.”

This was a fond high point in my Brother Jim’s life.

The coveralls were from Apollo 8, with the figure eight patch showing the path around the moon.

Well, you can bet I looked up Bill Anders and Apollo 8. Bill was a USAF test pilot who was accepted into the astronaut program in 1963. He participated in the Gemini and Apollo programs, but his only spaceflight was aboard Apollo 8, the second manned Apollo mission, the one that orbited the moon in December 1968 (though without the Lunar Module, which wasn’t ready). Anders did indeed take the first photo of the whole earth, and yes, I still have my copy of the Whole Earth Catalog with that famous photo on the cover. 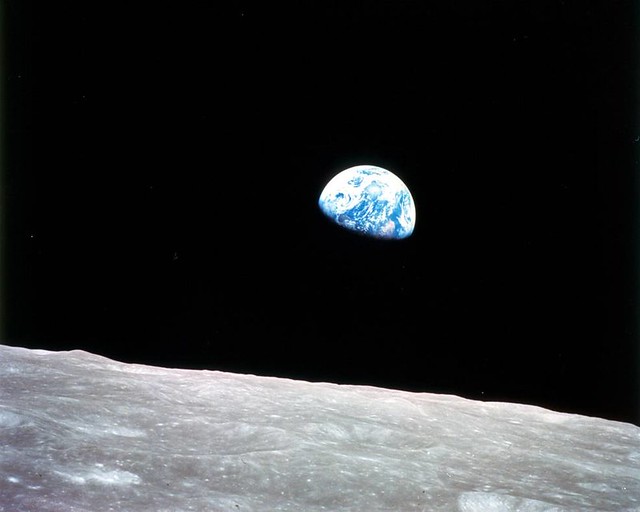 And here’s General Anders in his Mustang: 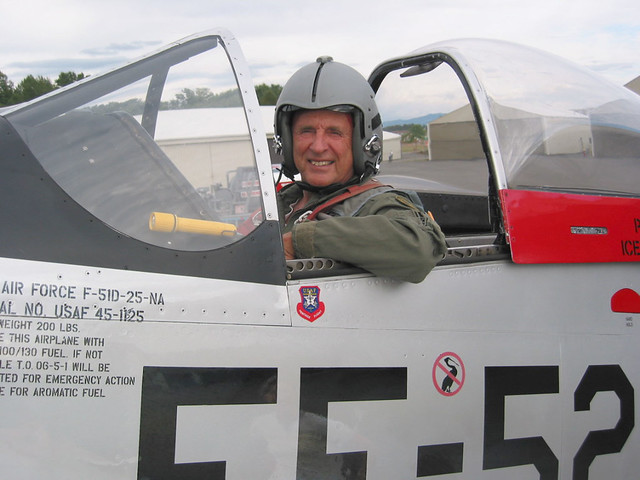 One thought on “Air-Minded: Story Time”