According to a tweet from China’s Xinhua News Agency, troops patrol the border area in Xinjiang Province, where elevations exceed 14,700 feet above sea level, astride banthas. 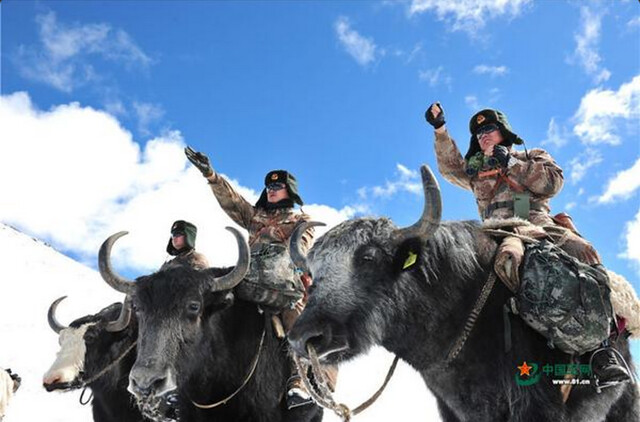 This reminded me of our trail scouting adventure Sunday morning, when Donna was forced to dismount to negotiate a steep mountain pass at 2,600 feet above sea level. A bantha would have made short work of that crag, let me tell you. 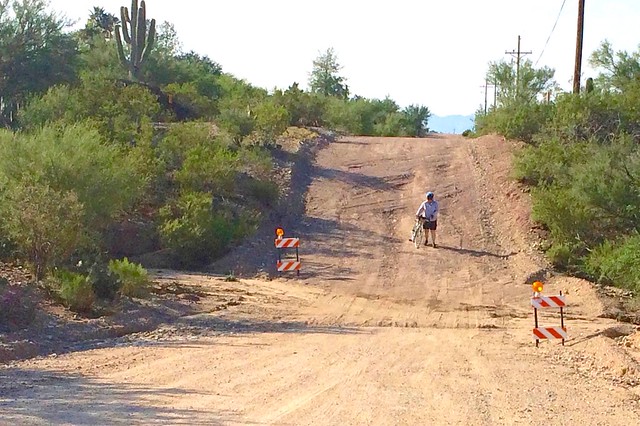 We were scouting trail for next Sunday’s Pedalfiles Bicycle Hash House Harriers ride, which will start and end in our neighborhood. Now that we have a trail for our friends, all that remains is to set up the logistics.

Speaking of rides, the next mini-gypsy tour is Death Valley, second week of November. I’ll travel with a couple of Goldwing buddies and overnight in Lone Pine, California, and Lake Havasu, Arizona. I considered peeling off for Las Vegas after Death Valley to spend a night with the kids, then riding home by myself the next day, but Donna and I are driving up later in the month for Thanksgiving, so I’ll hang with the hoodlums this trip.

No doubt all right-thinking Americans will tune in the Democratic presidential debate tonight. We’ll be watching, if for no other reason than to see how the candidates hold up under questioning and attacks. I’m not betting on Joe Biden coming in, and will be surprised if he shows up at the last minute tonight, but what do I know? I haven’t paid much attention to the news today. I think Joe will definitely step in if Hillary stumbles, but I don’t expect her to do that.

With apologies to fellow travelers everywhere, Bernie ain’t doin’ it for me. What kind of socialism does he bring to the race that Hillary doesn’t? I’m assuming, of course, that by “socialism” we mean centrist policy proposals, which is mostly what I hear Bernie saying. I think Hillary has staked out some positions to the left of Bernie, not that you can trust any of these birds to keep a campaign promise. But it comes down to this for me: Hillary can and probably will win; Bernie can’t and won’t.

There’s always the second season opener of Fargo, taped last night to watch later. If the debate proves too tedious, I know what we’ll be watching instead.

It should be obvious to everyone now that the House Benghazi Committee is a partisan sham, created for the sole purpose of digging up dirt on Hillary Clinton, the only Democratic presidential candidate the Republicans truly fear. My question is this: why didn’t the Democrats on the committee speak up sooner? Okay, Rep. Elijah Cummings, the ranking Democratic member, has been sounding the alarm, but what about the rest of them? And what about their boss, Nancy Pelosi?

They knew what was going on when Darrell Issa chaired the first investigation. They knew what was going on with the second and current investigation, the one chaired by Trey Gowdy. It’s well known they didn’t want to be a party to either witch hunt, but Nancy Pelosi ordered them to. Why didn’t Congressional Democrats speak up sooner? Why did they wait for that idiot Kevin McCarthy to spill the beans? Would they be speaking up today if McCarthy hadn’t spilled the beans? I wonder. There’s some evil going on here we haven’t even scraped the surface of. And I say fuck the lot of them, Democratic and Republican congressmen alike. Except for Elijah Cummings.

You know who I’m sorry for, though? Not Hillary Clinton, who has weathered worse attacks. No, I’m sorry for Bradley Podliska, the Army reserve officer and Benghazi committee staffer who took his concerns about the partisan nature of the investigation to Congressman Gowdy. You can probably guess what happened when he tried to change things in-house, going through proper channels. Right, Gowdy fired him. So now he’s going public.

Maybe he never heard what happened to Scott Ritter. Ritter was the former UN weapons inspector (and former Marine officer) who went public after Bush and Cheney ignored UN reports that Saddam Hussein had no weapons of mass destruction in Iraq. Oh, brother, they got him good.