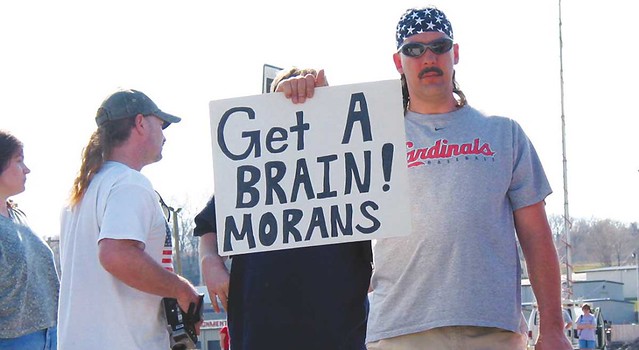 Conservative friends tell me Democrats are the real racists, not them. Their argument, if you can call it one, is based on the universally-acknowledged fact that the Democratic Party was, during the Jim Crow era, the party of white southerners. They love to point out that Senator Robert Byrd, a Democrat, was once a member of the KKK, and that President Abraham Lincoln, a Republican, freed the slaves. All true. But they carry on as if this is still the case today, counter to the reality that is all around them.

Surely the people who speak this nonsense know that southern whites switched parties and became Republicans decades ago, after Democratic politicians passed civil rights legislation and Democratic presidents signed it into law? Surely they know which political party today is trying to roll back civil and voting rights? Surely they can’t seriously be saying Republicans have African-American and Hispanic backs? I mean come on, they just say this shit to piss liberals off, right? Right?

It’s beginning to dawn on me they’re serious. In some twisted doublethink way, they believe what they’re saying. They live in a cognitive bubble where conservatives talk only to other conservatives, where no news source other than Fox News can be trusted, where facts are scorned as tools of Satan, designed to trip up right-thinking people and turn them into commies and atheists.

I can’t abide stupidity. I’m contemptuous of stupid people. I resent them breathing my air. I put them out of my world without a second thought. When it’s a friend or relative, someone I must out of common decency and respect pay attention to, it’s a little harder.

When conservatives who are close to me advance these ludicrous arguments, telling me Democrats are the party of the KKK or that liberals love Hitler (because “Nazi” is short for “National Socialism,” don’t you know?), I administer a test. Before chucking them out with the trash, I try to determine whether they’re merely prodding me with a liberal-pokin’ stick, or if they actually believe the twaddle they’re pushing. If they’re just trying to get a rise out of me, fine, we can argue as intelligent adults. If they profess to believe what they’re saying, I’m done with them.

This statement, uttered by John Stuart Mill in 1866, has stood the test of time: