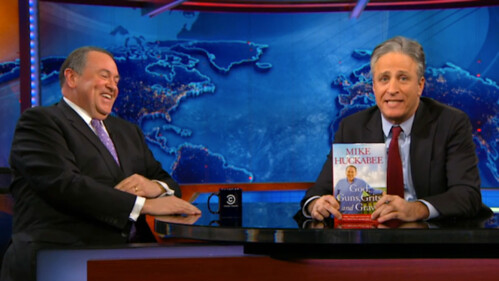 I’ve been a devoted but critical fan of Jon Stewart. For all the laughs, I thought he pulled more punches than he landed, particularly when he’d exchange softball pleasantries with agents of evil like John Yoo and Mike Huckabee. I scratched my head over the “Rally to Restore Sanity” he and Stephen Colbert put on in Washington DC a couple of years ago, where the message (Stewart’s, anyway) was so moderate it didn’t seem to have much of a point. I called him a villager, a media insider. I wished he’d have been more of a rabble rouser, because if any satirist and commentator on the left had the good will and trust of millions, it was Jon Stewart.

Last night, after Stewart announced he’ll be leaving The Daily Show later this year, a friend posted this to Twitter:

Yes, I thought, that’s it exactly. When I went to bed last night I was frustrated with Jon Stewart. Stewart could have tried harder to make a difference, to rally us, to inspire us to demand change. But he was content to be who he was, unwilling to risk his position and popularity.

When I woke this morning I felt differently. Funny how that works, isn’t it?

Who hasn’t made a single move toward lasting change? Me. You. Us. We’re the smug superior ones, smirking and chuckling as Stewart lampoons America’s race to the bottom, but never stirring out of our easy chairs to do anything to stop it.

Stewart, I realize, has had to walk a fine line. Had he tried to be an actual rabble rouser, his producers would have replaced him without a second thought. Had he been more confrontational with right-wing guests the only people willing to appear on his show would be Michael Moore, Al Sharpton, and Bill Maher. Stewart, like all of us, has to please his masters. In spite of that he’s been able to get a fairly subversive message out to a national audience.

Stewart has been enormously influential. Maybe not with the masses, who only know from Jon Stewart what they hear through the filter of Fox News commentators like Bill O’Reilly and Sean Hannity, but certainly with the literate and educated. He taught us to be skeptical of what the media tells us. He has been relentless in exposing hypocrisy. He very likely helped push Obama over the top in 2008 and 2012, at least among white voters. Last year 3.7 million Americans wrote letters to the FCC in favor of net neutrality. Would that have happened without the advocacy of Jon Stewart (and Stephen Colbert and John Oliver, who got their starts on Stewart’s show)?

Yes, it’s probably time for a change, and there’s no point in bemoaning Stewart’s decision to quit. I just want to say that despite my criticisms, I appreciate all he’s done, and to say thank you, Jon Stewart.

One thought on “Thank You, Jon Stewart”