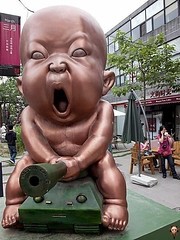 AWAG. No, it doesn’t stand for Atheist With a Gun. It stands for Asshole With a Gun.

George Zimmerman. Workplace shooters. Guys who track down and murder wives who’ve left them. Assholes with guns. Some of them may also be atheists … or not. Who cares? Faith or lack of faith doesn’t enter into their thinking. They’re just assholes with guns. Assholes who never should have had guns in the first place.

The guy who shot all those soldiers at Fort Hood in 2009? He killed for ideology and religion. Ditto the dude in Norway, ditto abortion clinic killers in the USA. Religion is a big part of the story in such cases.

We don’t yet know why Craig Stephen Hicks shot and killed three neighbors in Chapel Hill SC a couple of nights ago. Some think it was a hate crime, since all three victims were Muslim. But it mostly looks like an asshole crime: he shot them over a parking spot.

In any case, the media want us to know all about Mr. Hicks, especially this: he’s an atheist. What bearing this has on the crime is beyond me. Why would Mr. Hicks’ atheism be remarkable in any way? Lots of people are atheists, and some of them are assholes. Some, we now know, are assholes with guns.

Looks to me like Hicks, first and foremost, is an AWAG. And even if it turns out he did kill those three young people because they were Muslim, what does atheism have to do with anything?

I quit believing in god and heaven and hell and all of that around the time I hit my teens. That makes me, by definition, an atheist. I think a hell of a lot of us are atheist, though most don’t like to use the word since they think … probably rightly … that it puts people off. Fine, call yourself a non-believer, an agnostic, or a none-of-the-above, whatever floats your boat. But if you don’t believe, you, like me, are an atheist.

How about we atheists agree not to be AWAGs? It gives us a bad name. We can probably survive Richard Dawkins, but Craig Stephen Hicks? Say it loud and clear, brothers and sisters: he ain’t one of us!