Yesterday was my fourth pilgrimage to the Barrett-Jackson auto auction in Scottsdale, Arizona. It’s always fun to see the old cars, but the scale of the event is so large it’s hard to take everything in, the crowds so dense it’s difficult to find a clear line of sight for photography. This first photo, taken outside on the midway (yes, that’s a state fair/carnival word, and it’s exactly the right word to describe what Barrett-Jackson has become), doesn’t do the crowds justice. I took it early in the morning; half an hour later the midway was jam-packed. It does, though, give you an accurate idea of the prevailing weather: clear, beautiful, and 70°F, the kind of conditions that make Arizona a wonderful place to live … at least in January.

None of the vehicles on display activated my lust gland, but maybe that’s because I’ve come to accept the idea I’ll never own or drive a classic car. I just don’t have the money. Still, there were some interesting cars, trucks, and motorcycles on display, and I’m glad I decided to lug the good camera and flash attachment around with me.

I’m going to insert blocks of thumbnail images in between paragraphs. As always, you can click on the thumbnails to see the full sized images on Flickr. Alternatively, you can click here now and go straight to the full photoset, skipping the words altogether. Who loves ya, baby?

I mentioned crowds. The event lasts eight days, from Saturday to Sunday of the following week (this year from Jan 10 to 18), but the actual auction … the part you see on TV … doesn’t start until Tuesday or Wednesday. If you, like me, are crowd-averse, the time to go is Monday, which is both a workday and non-auction day. The downside would be that all the cars may not yet be on site. I was hoping Thursday would be a good compromise: yes, the auction would be in progress, but wouldn’t the hoards be at work on a weekday?

No, as it turned out. I forgot that the collector car demographic is baby boomers. I’m a retired baby boomer, so I can go to B-J on a weekday. Well, there are a hell of a lot of people just my age and just as retired, and damn if they all didn’t decide to go on Thursday, too.

My gosh, how very many of my fellow first-wave boomers use mobility scooters! I can’t count the times I had to yank a foot back the last second to keep it from getting crushed under a Li’l Rascal wheel. Scooters were especially bad inside the exhibit tents, where everyone is packed into narrow aisles between cars and it’s hard to see scooter people because they’re low to the ground, hidden amongst the walking.

Outside, you’ve got all your fat fucks* in rental golf carts. Between auction employees and fat fucks, you’re just as busy dodging golf carts outside as you are jumping out of the way of Medicare-scam scooters inside.

*I am a fat fuck, but at least I can still walk a few miles and stay on my feet most of the day, for which I am thankful.

So anyway, I drove up with two Tucson friends, retired boomers my own age. The three of us share similar memories of the cars of our youth, so I have to assume all the other old guys at Barrett-Jackson do too. But that doesn’t keep us from wanting to bend our friends’ ears about how popular Renault Dauphines were in the 1960s and how you don’t ever see them today, or how the whole front of a BMW Isetta opened up and that’s how you got in and out, or how the VW Beetles of the 1950s didn’t have gas gauges, or how they used to hide Caddy gas caps under the taillight. My buddies and I refrained, but I saw plenty of other gray-hairs** forcing their knowledge of old car trivia on their buddies. Hey, everyone on Social Security, we all grew up with those cars.

**I’m not claiming any superiority here. I wanted to show off to my friends too. I know … next time I’ll bring my grandson!

It was a pretty great day in spite of the crowds, and we three amigos had a fine time. Even though I didn’t fall in love with any particular car, there’s another, smaller car show down in Tubac at the end of the month, and I’ll be there too, camera in hand.

I’ll close with a photo I found online, an aerial view of the Barrett-Jackson tents at Westworld in Scottsdale, to give you an idea of the scale of the thing. Don’t go without a good pair of walking shoes! 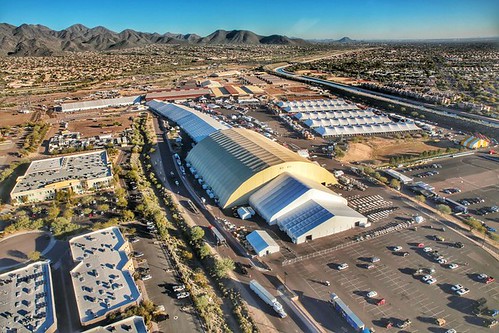