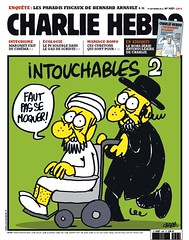 Watching NBC and MSNBC reports on the Charlie Hebdo terror killings in Paris, I see very few depictions of the magazine’s cartoons. In print and web-based media, though, the cartoons … even the really offensive ones … are everywhere. You’d have to be a cloistered monk not to have seen them, which makes me wonder why our TV networks are so squeamish about showing them.

I think I’ve established my anti-censorship cred here at Paul’s Thing, if for nothing else than my You Can’t Read That! posts. Oh, yeah, and that time I lost a friend for using the c-word to describe Sarah Palin. And all the times my wife has told me I shouldn’t have written about this thing or that. Freedom of speech? Bring it on, baby.

I confess Charlie Hebdo’s style of satire strikes me as gratuitously offensive, particularly its slams at religion, which are based on racial and cultural stereotypes so crude they’d embarrass a Republican. But when it comes to choosing sides, I’m with the irreverent satirists every time. We can’t give an inch on freedom of speech, even when — especially when — those who want to shut us up resort to violence and murder.

A friend asked me to read an interview with a former nun who says that, contrary to conventional wisdom, religion is not the driving force behind violence. When it comes to war, I take her point: while religion may be invoked to justify war, wars are fought for secular reasons like power, territory, and natural resources. Clearly, though, religion, or religion-based tribalism (which I think is a more accurate way to describe it), is a primary factor in terrorism.

The overwhelming majority of Muslims living in Western countries are secular, divorced from the religion-based tribalism sweeping the Middle East. They condemn terrorism carried out in their name by fanatics. You won’t see me jumping onto the let’s-kill-all-the-Muslims bandwagon, any more than I’d jump on a lets-kill-all-the-Christians bandwagon after an NAACP office or abortion clinic bombing. And I hope you won’t either. There are people who react to terrorism by trying to start tribal, religious, and racial wars. We have to stand up to them the same way we stand up to terrorists.

It’s not easy. When I see someone driving a pickup truck with a 2nd Amendment bumper sticker, I assume certain things about that person. When I see a woman wearing a hijab my thoughts are not kindly ones. To be human is to be tribal. I get that, because I see it in myself.

And since I harbor some of this tribalism myself, I don’t expect too much from other people. Muslims in Western countries have been under the gun since 9/11, and in the wake of recent attacks like the ones in France they’ll face even more prejudice, scrutiny, and suspicion. I can only hope governments act with restraint, targeting just the perpetrators of violence, not entire classes of people.

And wouldn’t it be nice if Fox News and right-wing talk radio just shut the fuck up for once? Hey, a guy can dream, can’t he?