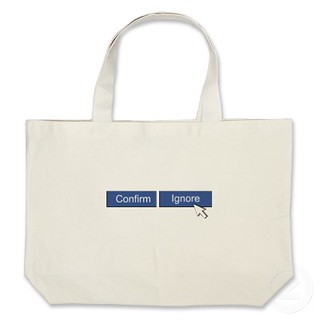 Facebook is grinding me down. My default reason for staying is keeping up with friends and family, but as reasons go it’s wearing thin. With few exceptions, my friends and I are just posting to be posting, and there’s so much junk clogging up my newsfeed it’s barely worth the effort to separate worthwhile posts from worthless ones. Empty calories, and addictive at that.

A friend called me out this morning on changing profile pictures. I do it too often, she says, to the point of being vainglorious. I thought I was doing it to amuse my friends, but maybe she has a point.

As time goes on I’ve come to value the Twitter experience more than the Facebook experience. I follow family and friends on Facebook, but truth be told we don’t have that much to say to each other. On Twitter, though, I follow people I don’t know … writers, commentators, reporters, military planners, a poet or two. I rarely try to engage them in conversation; mostly I read their tweets for news value, and in fact I’ve found Twitter to be a great source for both breaking news and stories being ignored by major media. I learn things from Twitter … I rarely say that about Facebook.

I’ll stay on Twitter. Whether I stay on Facebook depends on how my experiment in moderation goes. If it goes the way drinking in moderation went, I’ll probably have to give it up.

Donna’s been at a sewing retreat in Big Bear, California. She looked forward to it for months. She texted me yesterday to tell me she threw her back out a couple of days ago and has been miserable the entire time. She drove there with a friend, and they’re driving home today. I’m hoping her friend’s car seats have adjustable lumbar supports. The one or two times I’ve hurt my back, the driver’s seat in my car was about the only place I could be comfortable. She’ll be home later today. I’ll make dinner and offer what comfort I can.

Saturday I took the Goldwing to a neighborhood coin-op car wash to clean it for a ride up Mount Lemmon on Sunday morning. Riding home I noticed the outside air temperature display was wrong, and figured the water from the car wash must have affected it. I mentioned it in a tweet and got roundly schooled by a perfect stranger: 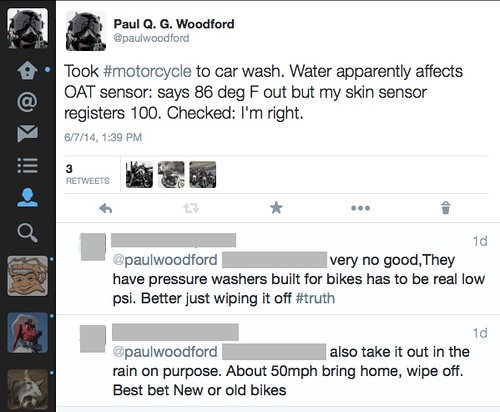 I learned with my first motorcycle, a Honda 50 Super Sport, that pressure washers are a no-no, at least if you want your engine to start afterward. Water gets inside spark plug leads and coils and can even short out ignition switches. But this is mainly a problem with “naked” bikes where the engine and electronics are exposed. For the past several years I’ve been riding a Honda Goldwing, a bike with a shell that covers all the naughty bits. Water doesn’t get in the works, and I’ve used pressure washers on it since I bought it new in 2001. In fact, here it is at the ski lodge on Mount Lemmon, all clean and sparkly:

Also, perfect stranger? I’ve been riding motorcycles since 1965 and have a pretty good idea what bikes look like after they’ve been ridden in the rain at 50mph. Perhaps we can agree to disagree.