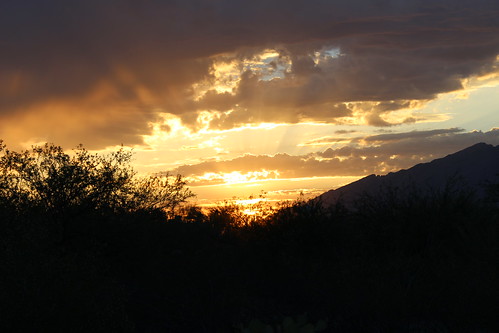 I took this photo last night, standing in my driveway facing, duh, west. I wanted a new cover photo for my Facebook page. I also wanted to convey the message I’m sunsetting my involvement with Facebook.

Right. Even as I announce I’m trying to kick Facebook I post new photos. But hey, it’s a start.

Donna came home from her week-long sewing retreat at Big Bear and took off again for another one, this time closer to home. She’s staying at a local hotel with her American Sewing Guild friends, and I, along with the other spouses, will meet her there for dinner tomorrow night.

The critters don’t like it. Donna drops by the house from time to time but she doesn’t stay the night and that confuses them. We used to say we had to stay together for the children. Now we have to stay together for our other children. We’ll all breathe a sigh of contentment when the weekend comes and Donna’s back home.

Iraq. Predictable? Sadly yes. Anyone with a brain knew this was how things were going to turn out for Maliki. And now he’s begging for US air strikes to stave off the inevitable. I hope our folks in the Green Zone are busy evacuating. Next time around let’s be more like the Swiss and just buy our oil from whoever’s in charge. The only people who can create peace and stability in Iraq are the Iraqis, and they don’t seem anywhere near ready to do that. So fuck ’em.

And fuck the Afghanis too. They don’t have the guts to face down the Taliban? Fine. Not our job to do it for them.

I don’t have many fucks left to give today, but I can always muster one up for the Republicans, the party of assholes and assholism. I turned irrevocably against them sometime during the Clinton administration, and everything they’ve done since has hardened my contempt, which by now is so dense and compressed it could scratch a diamond.