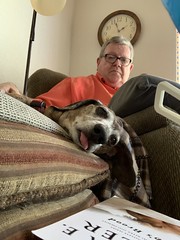 Mister B is home from Valley Animal Hospital. As you can see in the photo, he’s been through the wringer, but we hope the worst is now over. We’ll be mixing antibiotics and anti-inflammatories in with his food for the next two weeks. His fever is gone and he’s no longer hacking, but there’s a way to go before he’s back to normal. We went for a short walk this morning and I hand fed him breakfast afterward. I’ll keep you posted on his recovery, and on Mister B’s behalf, we thank you for all the good thoughts you’ve been sending his way.

The most interesting thing happened while Mister B was away. Auxiliary dachshund Maxie took over his doggie bed in the office and assumed his role as helper and accomplice: suddenly perky, interested in everything I did, never more than a few feet away, one step behind as I moved from room to room. It’s pretty clear she wishes she were an only dog. She was here first and is technically the alpha, but defers to Mister B in all things, large and small.

On to other matters, large and small:

Happy Juneteenth! With it being so much in the news I made it a point to learn more about it. Now I know enough to worry white Americans might try to adopt it. If we do, we’ll inevitably make it less about the heritage of Black Americans and more about all the wonderful things we’ve done for them (insert sarcasm emoji here). So I’m going to gently suggest we don’t.

The relationship between slavery and the American Revolution. The Tulsa Massacre. The mass eviction of Mexican immigrants in the 1930s. Lindbergh and the Nazis. The MS St. Louis. Sundown towns and the Green Book. The WWII internment of Japanese-Americans. What else are we belatedly learning from popular culture that they were afraid to teach us in school?

I’m blogging with my new computer glasses, uncomfortably aware of the astigmatism correction. Words on the monitor are sharp and clear, but my right eye feels as if it’s being pulled away from the point on the screen it wants to focus on. Something I’ll get used to, I hope!

I ordered readers and computer glasses. When I picked them up at Costco yesterday the guy in the optical department told me the pair with the blue tortoiseshell frames had the computer lenses, the pair with he brown tortoiseshell frames the reading lenses. Sitting down at the computer was a disappointment: the blue glasses didn’t work worth a damn. Later, picking up an Octavia Butler science fiction novel to read with the brown glasses, I realized the guy at Costco got them mixed up. Or maybe I did. Anyway, the glasses are sorted out now, and apart from getting used to the astigmatism correction, they’re just what the doctor ordered. 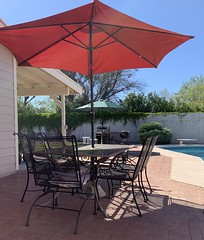 My Fathers’ Day plan is to smoke a rack of ribs and serve them with baked beans and corn on the cob. The new patio umbrellas are up and will, I hope, provide some relief while I tend the smoker in the heat. The wind is supposed to quit blowing today and over the weekend; this’ll be helpful with the fire burning in the Catalina Mountains just north of us, but temps down at our level will go up to 110°F. I’ll probably hook an extension cord and garden hose to our cooling fan, the one with built-in mister nozzles, and put it under the green umbrella on the old hot tub slab, now home to the Fortress of Smoke & Grillage™.

I’m off to the Comcast/Xfinity store for an updated cable box/DVR and wireless cable connector. The one is for the main TV in the family room, the other for the old TV, now relocated to the bedroom. The store is clear across town, so the mission will be a long one; if I remember I’ll stop by my friend Ed’s new pizza place on the way home for takeout.

One final item for my MilAir audience, a short news article revealing, for the first time, a highly-classified jet fighter called the F-15 Sea Eagle. The story was broken last week by the Bernardsville (New Jersey) News:

The Air Force managed to keep this aircraft under wraps for 40 years, hiding the program in plain sight under the code name “F-15C Eagle.” Dear reader, now that the secret’s out, I can finally confess I was one of the small cadre of pilots to fly it. I hope when they make the movie they’ll find someone taller than Tom Cruise to play me.

One thought on “The Mighty Sea Eagle”