Last week my friend Chuck organized a trip to the Barry M. Goldwater Air Force Range in southern Arizona. Chuck and I are docents at the Pima Air & Space Museum in Tucson. Like me, he’s a former fighter pilot. In his USAF days he flew F-4s; later he joined the Arizona Air National Guard, where he flew A-7s and F-16s. He belongs to an organization of local business people who support the AZ ANG; Chuck set up the trip for their benefit.

That’s Chuck in the front left of the photo. He started talking about organizing this outing months ago. I told him I’d love to come along, so when the time came he gave me a call. We met our business people at the AZ ANG base at Tucson International Airport last Tuesday morning and boarded a bus driven by our escort, the ANG public affairs officer. A two-hour drive took us to the town of Gila Bend, where we stopped for lunch. Another half-hour drive took us to an entrance gate where we were met by another public affairs escort, this time from Luke AFB in Phoenix. Our two escorts then led us onto Range #2 to watch live bombing and strafing practice.

Most of our group stayed in the shade on the ground, but a few us us climbed the observation tower to take photos. The tower was manned by a couple of Luke AFB F-16 pilots, there to score their fellow pilot’s bombs and strafing. The bombing target was a derelict Army truck about a mile away; the strafe target was a suprisingly old-school cloth panel offset about 2,500 feet from the tower.

Twenty minutes after our arrival the boys from Luke checked in, and a few minutes later we began to hear them overhead. They flew two dry passes on the bombing target at 5,000 feet, barely visible from the ground, then started making hot passes with 25-pound practice bombs. Though very small, these practice bombs are designed to have the same aerodynamics as actual 500-pound iron bombs. They have a small charge in the nose and emit a large puff of white smoke upon impact: the smoke allows the observers in the range tower to score the hits. Lead was consistently short or long, but his wingman scored a shack (a direct hit) on the truck and I was able to capture a nice photo sequence of him doing it (click on the individual thumbnails to see the full-sized photos on Flickr; you’ll see the bomb hit, followed by the puff of white smoke).

After expending their 25-pounders the F-16 pilots set up for strafing runs on the cloth panels. Since strafing is done at low altitude (500 to 1,000 feet), and the strafe target was just 2,500 feet from the observation tower, we had a closeup view of the action. Each F-16 made two hot passes on the strafe panel, and Chuck and I were able to get some great photos. With our cameras set to a shutter speed of 1/1600th, we were even able to capture 20mm rounds in flight.

Chuck brought along a professional telephoto lens and was able to capture an even better image of a 20mm round leaving the F-16’s cannon. 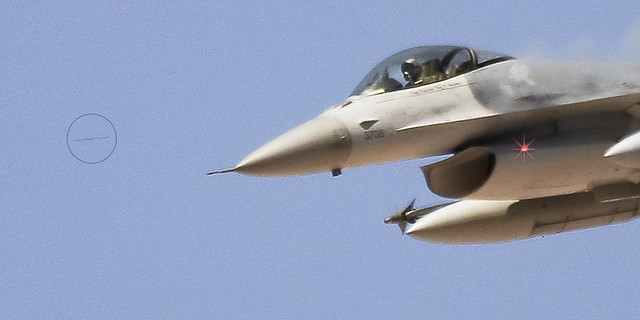 Here’s a photo of the strafe panel as almost a hundred 20mm rounds hit it in the space of a second: 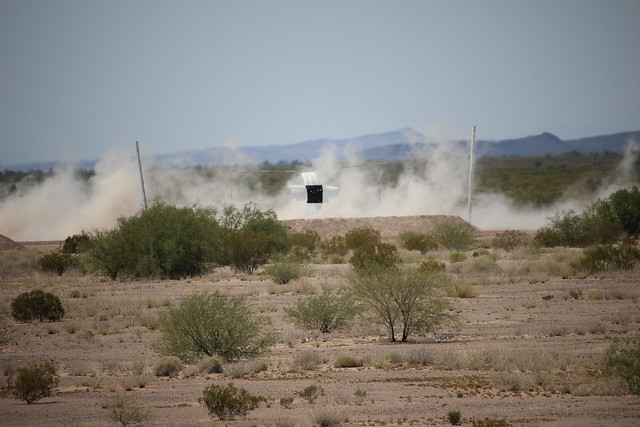 The F-16 uses the same MA61A Vulcan cannon I flew with in the F-15: a 20mm six-barrel Gatling gun firing at a very high rate and at a slight upward angle (which you can see in the above photos). The F-15’s cannon fires 940 rounds at a rate of 6,000 rounds per minute, or 100 rounds per second. The F-16’s cannon fires 511 rounds at a slightly slower rate: 4,800 rounds per minute, or 80 rounds per second. Still, that’s a hell of a lot of rounds per second, and the sound the gun makes is impressive. Our PA escorts warned us the sound of the guns, when it reached us, would be startling. Fortuitously, one or our guests group took a short video of the group on the ground as two F-16s fired their cannon just 2,500 feet away. You can see several people jump when lead fires; stay with the video a few seconds longer and you’ll hear his wingman fire. Let me tell you, it’s even louder in real life, and I can only imagine what an A-10’s 30mm cannon sounds like! 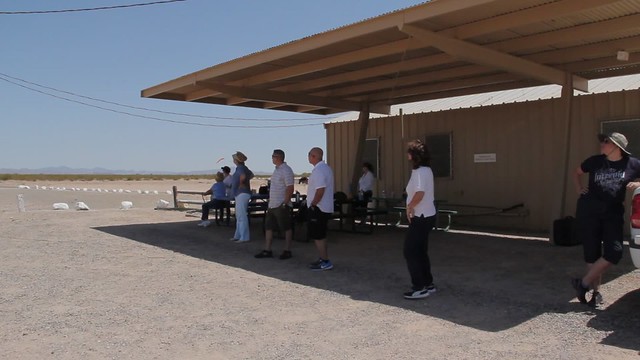 I have to say I was surprised to see that air-to-ground gunnery ranges haven’t changed a bit from when I started flying fighters in 1978. They’re actually quite primitive. The targets, at least on this range, aren’t electronically or acoustically scored; pilots in the tower grade bombs and bullets by eye, radioing scores to the pilots overhead. The foul line, which pilots must not cross while still strafing, is as basic as it gets:

The Barry M. Goldwater Range used to be the Gila Bend Range; most pilots still call it that. It’s used by the ANG, the USAF, and the Marines from Yuma. There are at least three other scored gunnery ranges adjacent to the one we visited; the air-to-air portion of the range is farther to the west.

I flew on what was then the Gila Bend Range when I first checked out in the F-15 at Luke AFB in 1978, firing at a towed dart target over one of the air-to-air ranges in the western part of the complex. The tow pilot cut the dart loose after my instructor pilot closed in on it to count the holes I’d punched through its skin; I assume what’s left of it is still resting on the ground somewhere out there (click here if you want to read an earlier Air-Minded post I wrote about aerial gunnery, which includes a photo of a shot-up dart on the ground at Gila Bend).

Chuck’s already organizing another range trip, possibly in October, hoping next time to catch some of his AZ ANG F-16 buddies at work, as well as the A-10s from Davis-Monthan. I have an RSVP in. Now to start shopping for a high-end telephoto lens like Chuck’s!

One thought on “Air-Minded: Shack!”