Bet you haven’t seen that combination of blog title words before!  I’m half an hour into the smoking process, photographing and blogging as I go; here’s where I’m at: 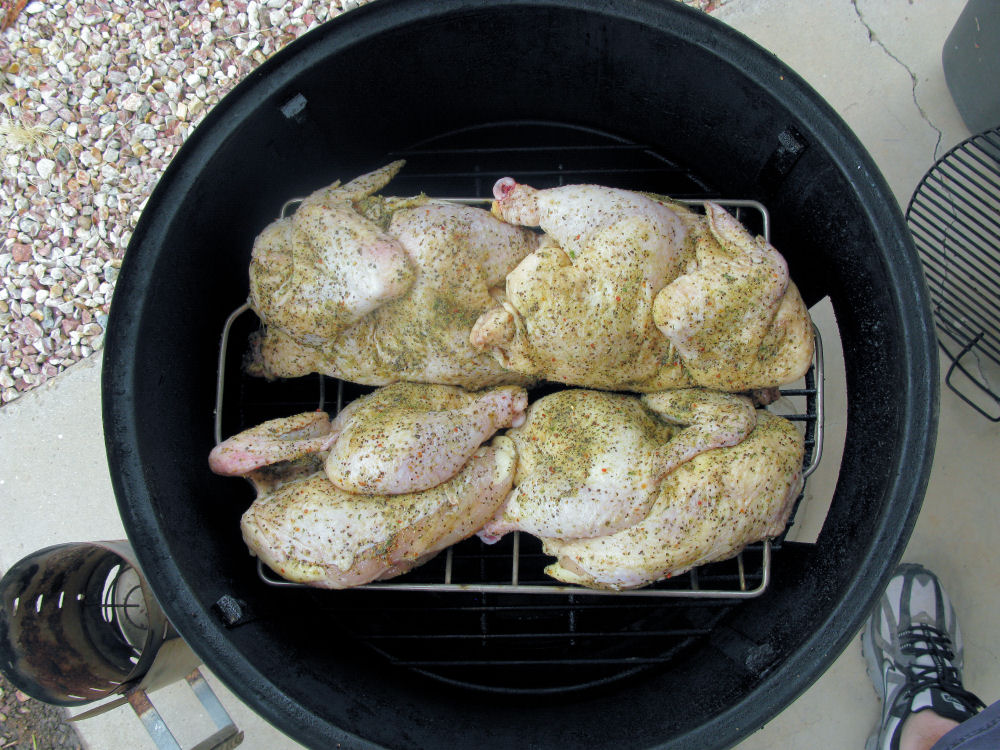 Chicken on the lower rack

I prepared two chickens by cleaning and cutting them in half with heavy duty kitchen shears, brushing them with olive oil, then coating them with a dry jerk rub.  I left the skin on so they won’t get too dry during smoking.  I’m guessing it’ll take two to three hours to cook them. 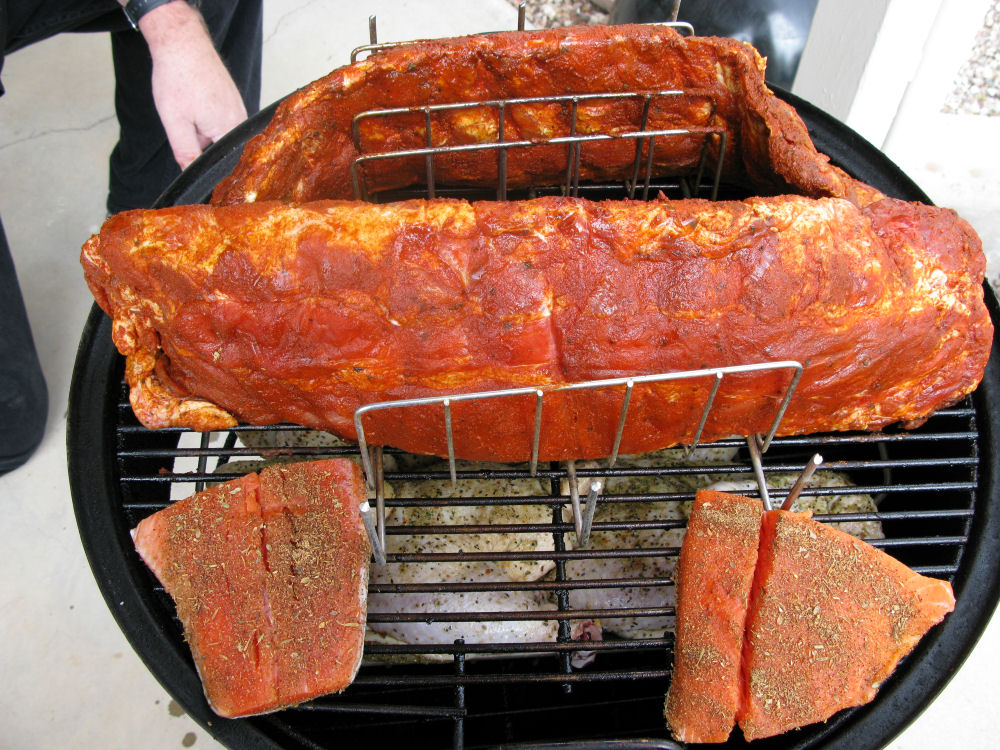 Ribs and salmon on the top rack

I prepped the ribs four days ago, removing the membranes, coating them with Corky’s Dry Rub, wrapping them in foil, and storing them in the fridge.  The only prep I did on the salmon filets was to wash and pat them dry, then sprinkle them with Chef Prudhomme’s Seafood Magic just before putting them on the grill, skin side down.  The ribs will probably take three hours; the salmon should be ready in two.  Again, I’m just guessing here: I use the TLAR (that looks about right) method.  I’ll know when the ribs are done when the meat begins to pull away from the bones; I’ll use a meat thermometer to test the chicken; the salmon should be easy to check visually, like the ribs. 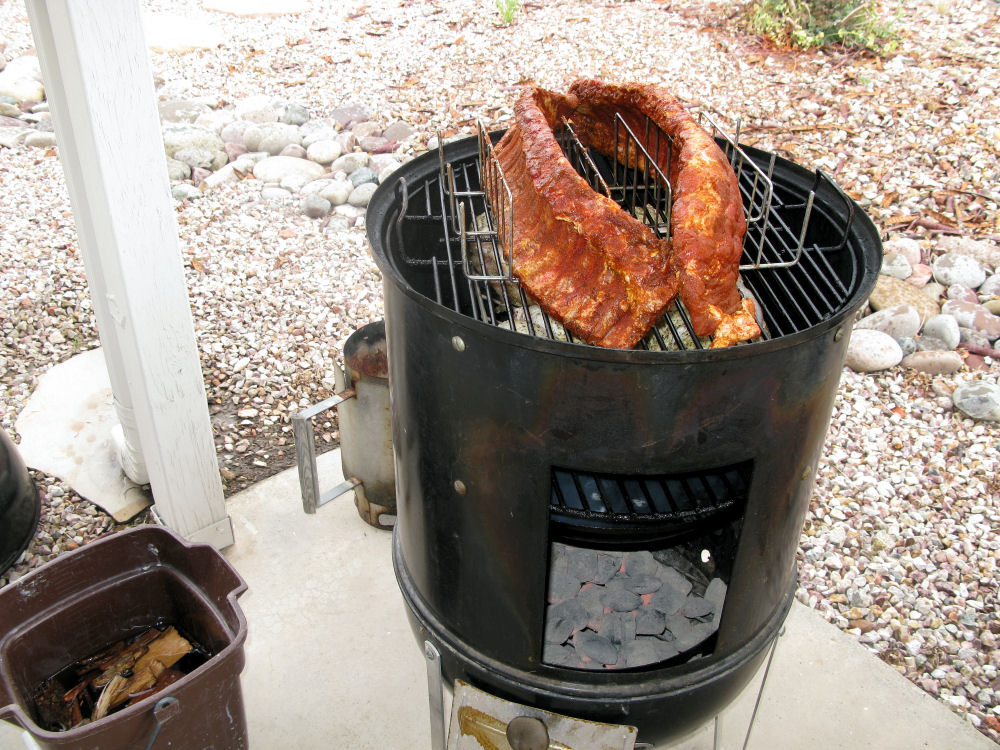 A good photo of the charcoal

I’m smoking on a Weber Smoky Mountain cooker.  This photo shows what a good single layer of hot coals should look like. I’m just about ready to add the wood chips from the bucket on the left, put the lid on, and close the access door.  I should mention that there’s a water pan between the coals and the lower rack; I periodically add water to the pan throughout the cooking process. 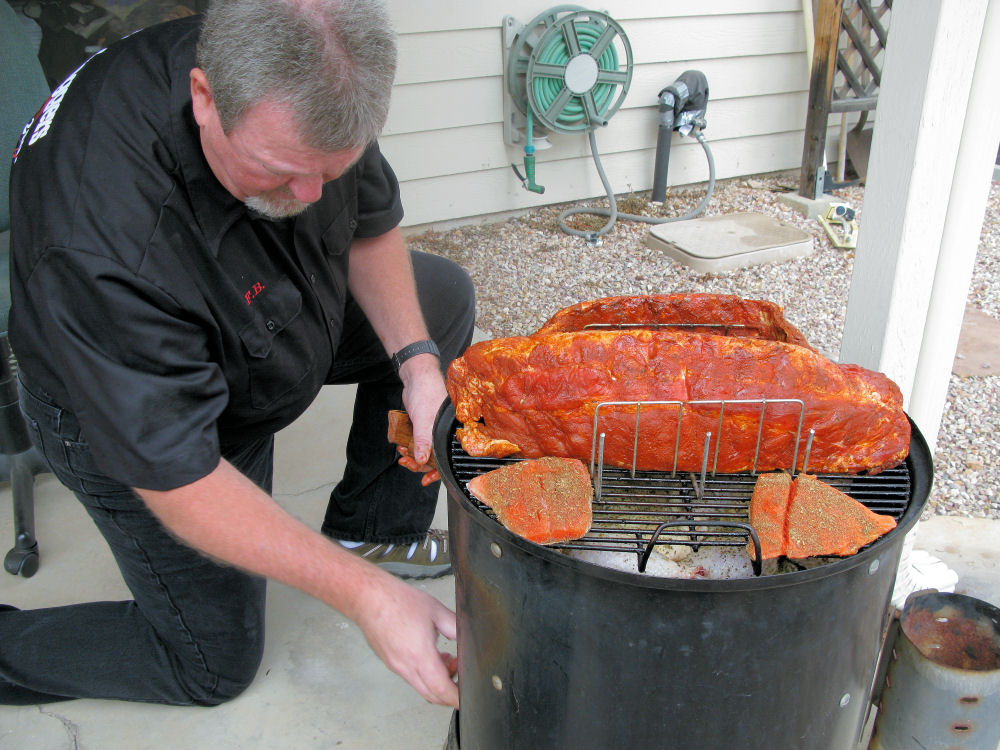 Adding wood chips to the charcoal

I keep a single layer of charcoal going on the bottom, adding a dozen new briquettes and a few chunks of hickory wood every hour or so. 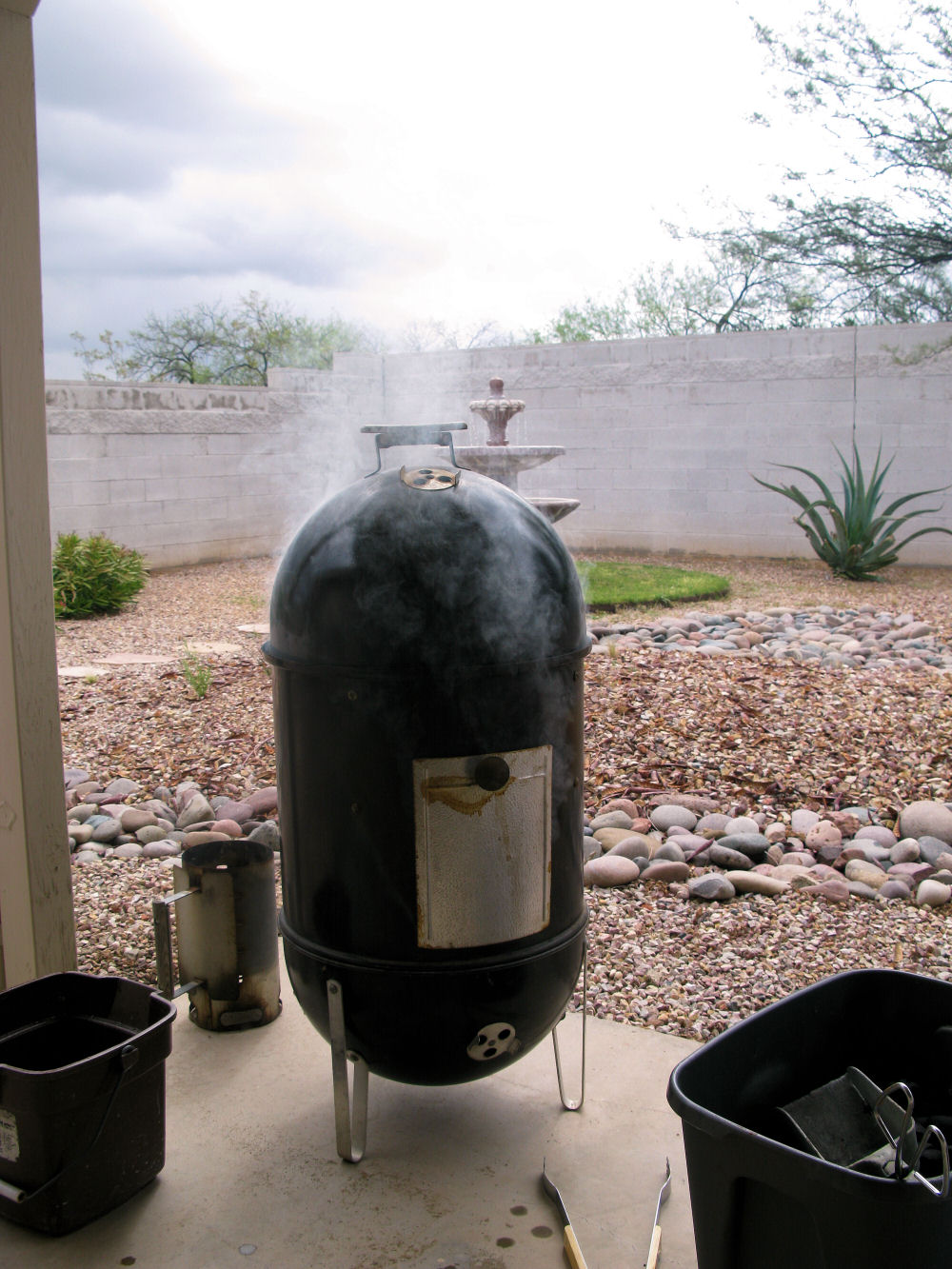 The smoker in action

Everything right at hand: the bucket of water and wood chips on the left, spare charcoal on the right.  The tongs are great for adding wood and charcoal through the door of the smoker.  A lazy cook is a good cook!

Update (12:45 pm): The salmon is done.  Unfortunately I didn’t get to it with the camera before everyone else had gotten to it with their fingers, but here’s what’s left: 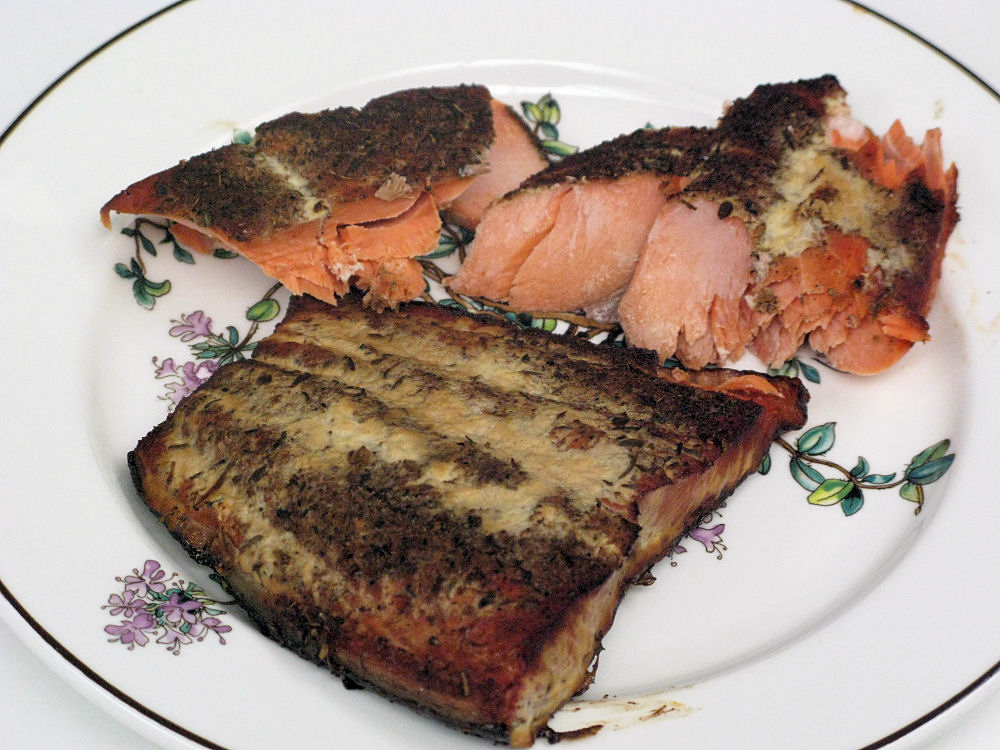 And here are the ribs and chicken, two hours into the smoking process (you really shouldn’t take the lid off, but I needed to poke the chicken with a meat thermometer): 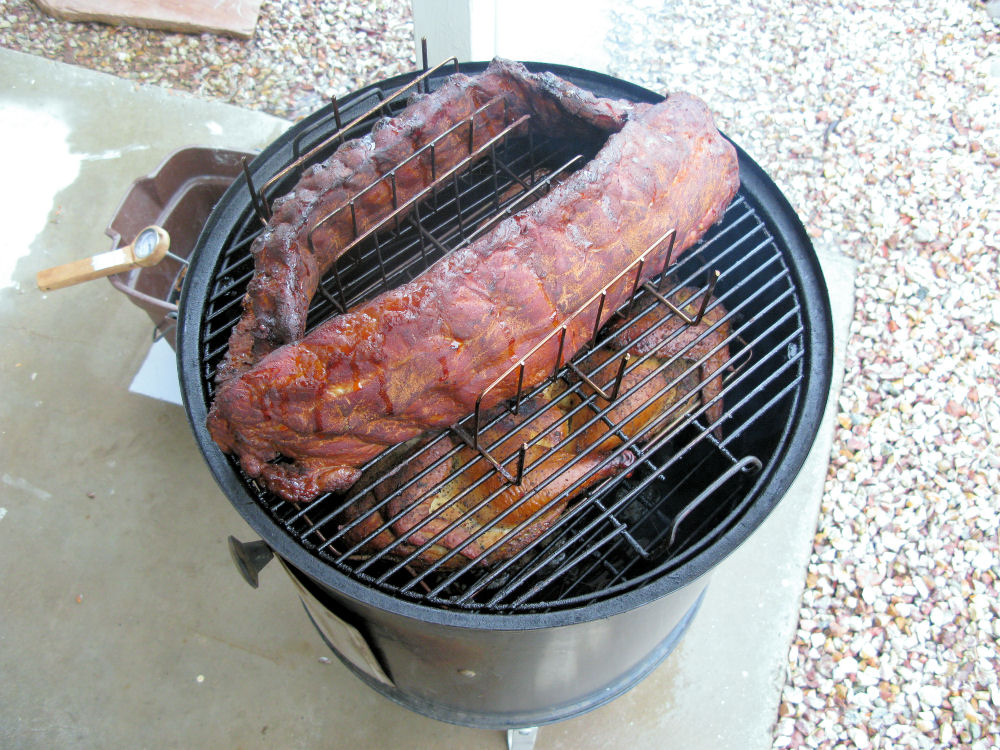 Five minutes ago the chicken was at 140° F; I’m waiting for it to get to 165° . . . just eyeballing the ribs, they should be done when the chicken is (the meat is just beginning to pull away from the bones).  To recap, the salmon took about an hour and a half; the chicken and ribs will run just over three hours.

Update (1:30 pm): The ribs are done.  The chicken is about five degrees short of done; I’ll guess another half an hour.  So: the ribs took three and a half hours, but they were really done at about three hours.  The chicken?  I’ll have to say four hours. 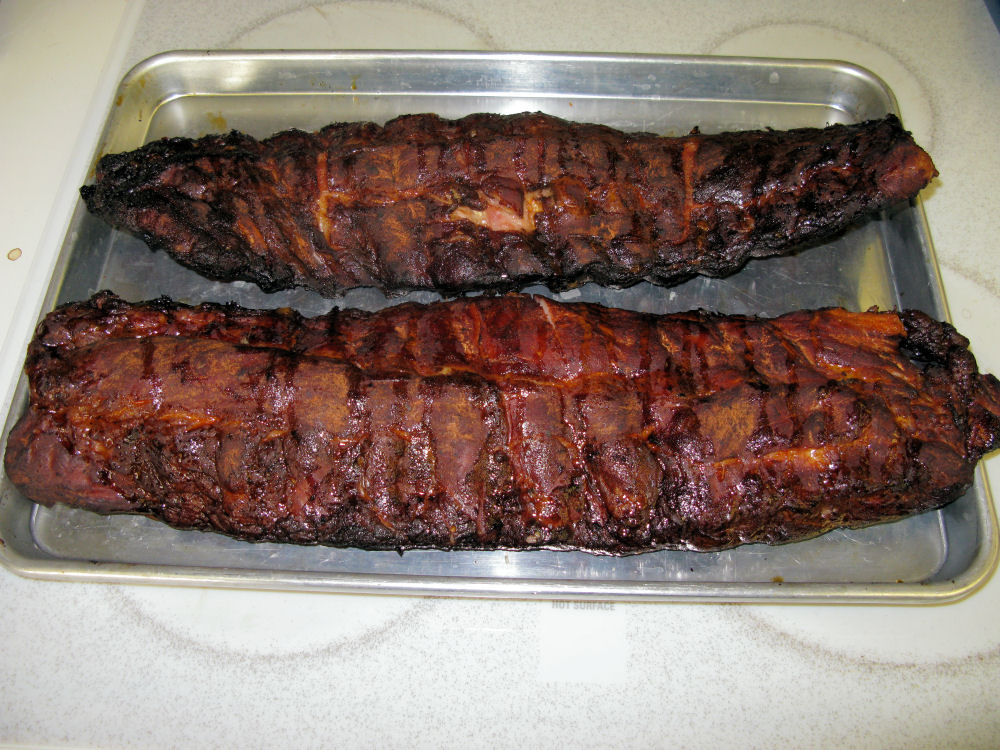 Update (2:30 pm): The chicken is done.  Four and a half hours.  It’s hard to guess ahead because so many things can alter your smoking/cooking time.  Wind, for one . . . and it has been a windy day.  The chicken would probably have been done sooner had there been no wind.  Anyway, it was worth the wait: 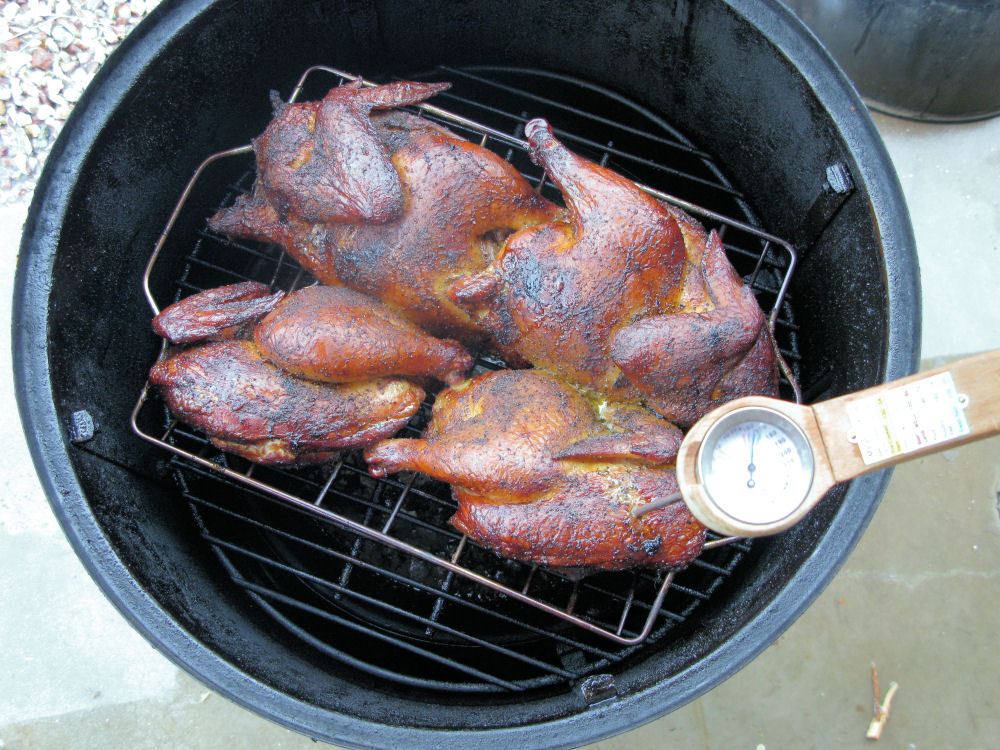 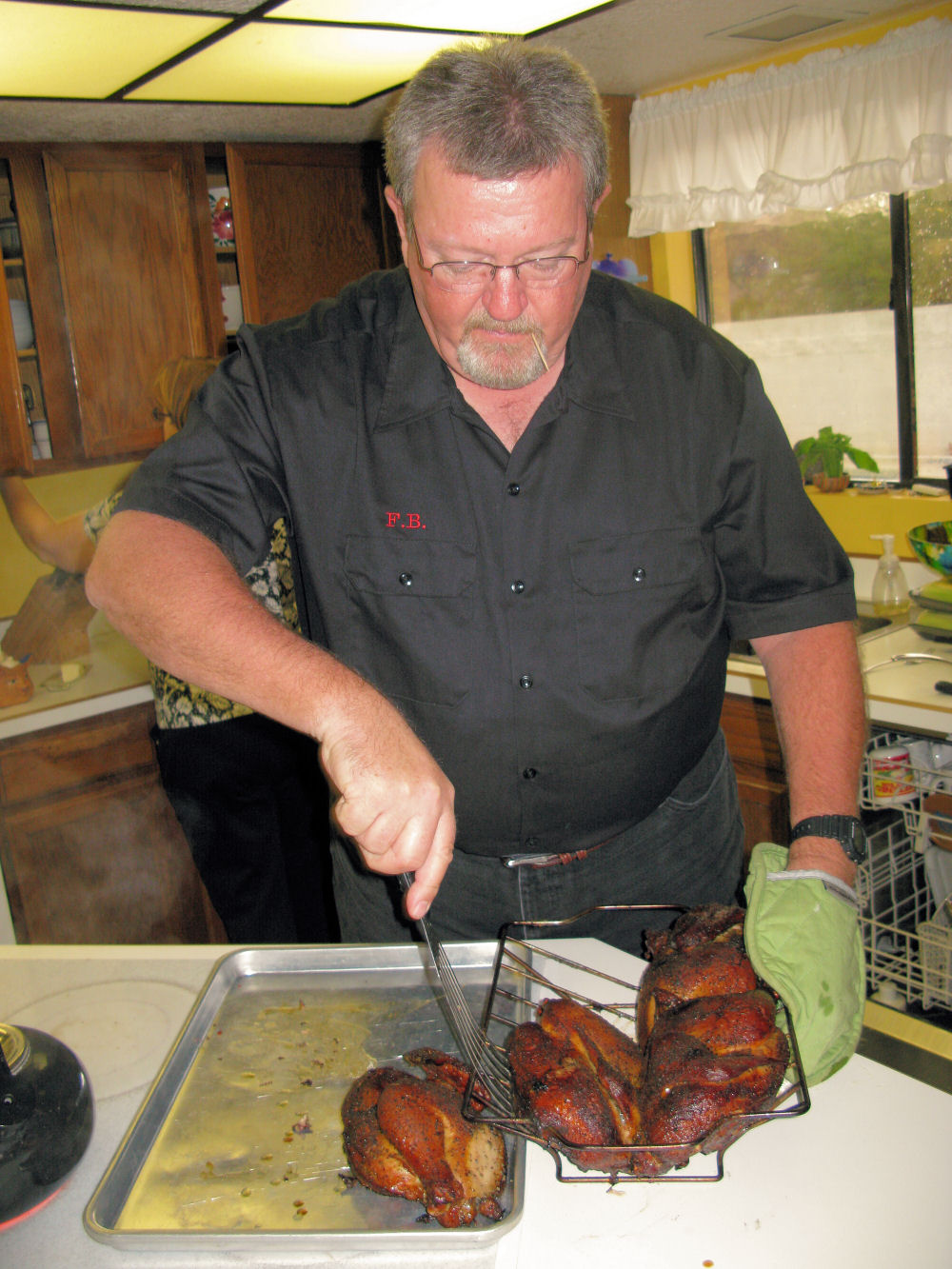 Transferring the chicken to a baking pan 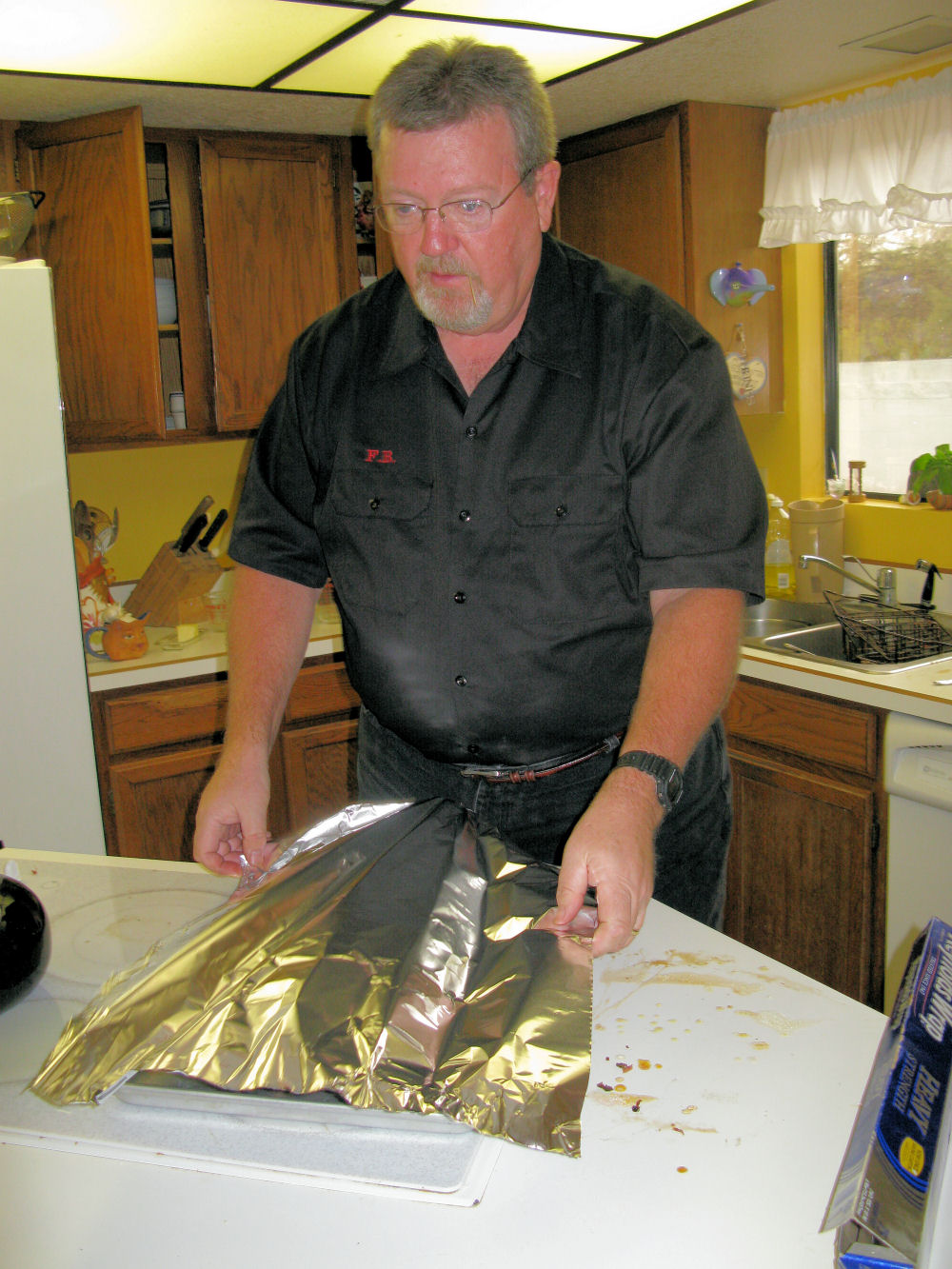