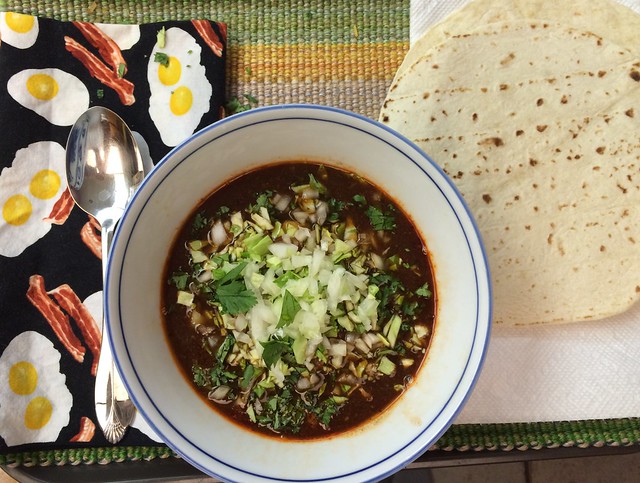 I discovered this stew at a Mexican restaurant in Tucson. So far I’ve found only one other local restaurant serving it. I’m told it’s street food, highly regarded as a hangover cure. What impressed me was its rich beefiness, reminding me a bit of German oxtail soup: a thick broth with plenty melt-in-your-mouth meat at the bottom of the bowl, served with garnishes to sprinkle on top: cilantro, onion, lime, sometimes finely-diced cabbage; tortillas on the side to mop up the broth.

My recipe is a work in progress. English-language recipes are few and far between; when you do find them they differ significantly on ingredients and are often geared to the preparation of industrial quantities of the stuff. But I am determined, and to that end I asked the waiter at the Mexican restaurant to see whether the owner would share her recipe. Here’s what he brought back: 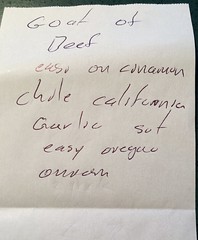 If you can’t read it, it says “beef or goat, easy on cinnamon, chile California, garlic salt, easy oregano, onion.”

As this hand-written recipe should tell you, making caldo de birria is an art. Comparing this restaurant’s recipe to others I’ve found, the general idea is to use beef and sometimes one other kind of meat (goat, spare ribs), water, a purée made from chiles, onion, garlic, and spices (cinnamon, oregano, sometimes cloves, bay leaf, salt & pepper). This restaurant uses chiles California; other cooks use a combination of guajillo, ancho, mulato, or cascabel chiles. Making the chile purée is a bit of an effort, but I knocked it out in an hour, and it was my first time. I’ll give you the details below.

So with that as background, I made my own step-by-step recipe, with ingredients sized to serve four to six people. I was pretty happy with my first effort; happy enough to commit my home-made recipe to the cooking blog. Sure, I’ll tinker with it next time, but the basics are here.

Chile purée: put on a pair of disposable kitchen gloves and keep them on while working with the chile peppers (very important). Bring a pot of water to boil, reduce to simmer, and soak the dried peppers for 20 minutes. With tongs, remove the peppers and place on paper towels to drain. Pull the stems from the peppers and discard. Slice the peppers in half, scrape out the seeds and membranes and discard. Put the cleaned peppers in a food processor or blender with one cup of hot water and purée. Strain the liquid from the purée into a bowl and set it aside. Throw the pulp away. Here are some photos:

Stew: put water & beef stock in a good-sized pot. Add the meat, garlic cloves, and onion (the onion does not stay in the finished stew, so rather than chopping it up, peel a whole onion and score it deeply on one side so that it won’t come apart in the stew as it cooks and can be fished out later with a slotted spoon). Bring the stew to a boil and cook for 1 hour. Add the bay leaves, thyme, chile purée, cumin, cinnamon, oregano, cloves, salt & pepper. Reduce heat to simmer and cook for another hour or so, or until the meat is tender. 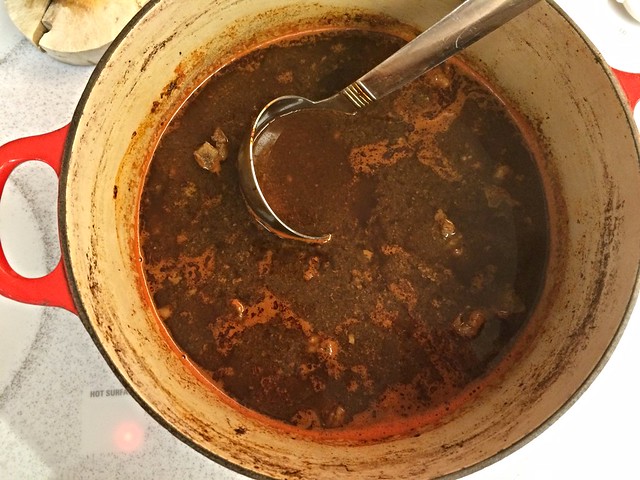 Sauce: some recipes call for a sauce to be served on the side, presumably to be stirred into the stew to taste. Frankly, the sauce did nothing for me and I won’t bother to make it again. I will also note that neither of the two restaurants where I tried caldo de birria served it with sauce. If you want to try it and make your own decision, just purée the ingredients in a blender, then set aside for later.

Garnish: I like the onion, cilantro, and cabbage finely diced. The lime is a good accompaniment too. I understand sliced radishes are sometimes used as a garnish. 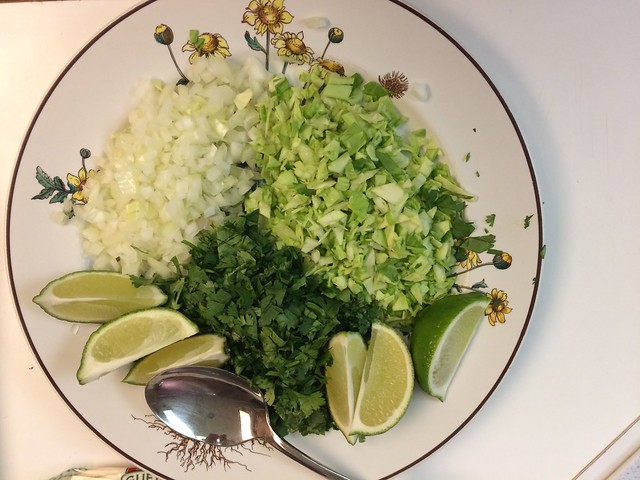 Serving: serve in bowls with sauce, garnish, and tortillas on the side.