Members of our cooking club met last night at the home of Magret de Canard for our second attempt at a do-it-yourself dinner, this time to cook our own meats and vegetables on raclette grills. Everyone had a role to play in preparing dinner beforehand: Houskový took charge of the roasted potatoes, Anitra and Ditalini chopped meats and veggies for grilling, while the rest of us — me, Manzo, Gina, and Magret — whipped up dipping sauces. A small amount of wine was consumed during the prep session.

Once all was ready we sat down and started cooking veggies and meats on two electric raclette grills. That is when we learned the fourth rule of cooking club: Anitra noticed a distance lack of sizzle on the grill at her end of the table. Fortunately Magret had a long extension cord and we were able to find a working plug on the other side of the room. Before long both grills were sizzling away. 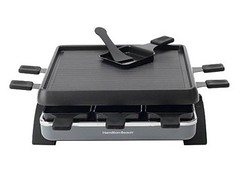 Raclette cooking is German, similar to Swiss fondue and Korean tabletop barbecue. You cook your meet and veggies on the grill while you melt cheese in little trays that slide into recesses below the hot grill top. The dipping sauces went very well with our meat (beef, chicken, and shrimp) and veggies (broccoli and quartered mushrooms); as for the melted cheese, some of us put it on our roasted potatoes while some of us dipped bread in it.

I almost forgot — Magret had another project for us, preparing our own desserts. She cut sheets of puff pastry into squares and gave us all chocolate and hazelnut chunks for filling. After we filled our pastries and folded them over into triangles, Magret put them aside on baking trays, then put them in a preheated oven as we finished dinner. Dare I say even more wine was consumed at table? But you already guessed that.

So: two successful community cooking projects in a row now. It really is more fun when everyone has something to do, and we’re thinking about other DIY ideas for future meetings. Next time, though, we’ve agreed to go back to our original scheme: picking a single chef and assigning different courses to members to prepare at home and bring to the hosts’ house. Our July hosts are Anitra and Manzo, our chef is Emeril Lagasse, and we’re cooking Cajun.