The end of the week has come again.  The world’s most interesting couple doesn’t eat much steak, but when we do we eat it on Friday night … and with that in mind I took a flank steak out of the freezer this morning.  This afternoon I’ll put it in a marinade of soy sauce and lime juice.  Potatoes, Brussels sprouts, grilled flank steak, and a movie.  Sounds like a nice evening ahead, eh?  Too bad about the Dos Equis, though.  Donna doesn’t like the stuff, and I’m an iced tea man.

I spent yesterday morning and part of the afternoon at my buddy Ed’s garage, putting brake pads and a new front tire on the Goldwing.  The rear tire is good for at least another 5,000 miles, so we put the new rear I bought on the rack against the day I wear the current one out.  We discovered that one of my front disk brake rotors is ever so slightly warped.  It’s no impediment to riding, but eventually I’ll have to order a new one … they run about $150.  It’s always something.  I just realized that while I was monkeying around later, trying to put earphones in my new helmet, Ed cleaned up the mess we’d made and I didn’t help one bit.  Some friend I am.

Another friend is coming to visit, Sunday through Friday.  This would be Angie, who used to play with us all the time but moved to Tampa a couple of years ago.  She’s approximately 50 times as active as we are.  I hope we can keep her entertained.  I hope we can keep up with her.  Or we can just loan her our car and let her raise hell on her own!

One of my Limbaugh-lovin’ Cape Girardeau in-laws has become involved in what looks to me like a religious cult.  She’s been posting Carry the Cross announcements on Facebook, many of them featuring full-face images of this guy, the Missouri pastor behind the, uh, movement: 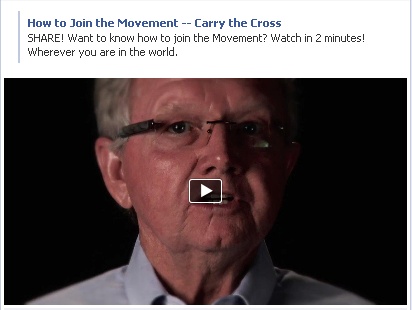 I called her on it the other day, pointing out the creepy Big Brotherish nature of these images and asking if she was sure she wasn’t getting involved in a personality cult.  She says no, but in my experience, religious movements closely associated with living people (as opposed to, say, Jesus or Muhammad) are almost always cults.  She then explained to me that she filmed the video from which these images come.  Now I’m beginning to fear the personality behind this cult is her!

I just hope, once she has her mansions and Rolls-Royces, and of course the obligatory $100K motorhome for her dogs, she’ll have a little left over for family.

More on the crazy pilot phenomenon I blogged about yesterday:

I don’t have links, sorry, but I well remember a USAF fighter accident from the early 1990s, one of a few that led the military services to start considering human factors in mishap prevention.  A part-time Air National Guard pilot who flew for the airlines in civilian life crashed his attack jet during a practice bombing run, killing himself instantly.  The ensuing investigation brought some interesting information to light.

The accident pilot’s former wife was to meet him in court the very next Monday.  He’d never paid a dime in court-ordered child support; she was petitioning the court to freeze his remaining assets.  Unknown to her, he’d lost the house to foreclosure, and the assets she thought he’d been hiding from her were long gone.  An ANG squadron-mate had loaned the accident pilot $24,000 just weeks before and was becoming concerned about getting his money back.  At least one co-worker at the airline was aware of the accident pilot’s increasing concerns over his financial situation.  No one at the airline or in the ANG knew that the accident pilot was heavily involved in a multi-level marketing scheme on the side and wasn’t getting much sleep.  When the investigators went through the accident pilot’s personal records, they discovered he had made no arrangements to travel to the city where he was to meet his wife in court; in fact, he was scheduled to fly for the airline that day.  The guy’s life had come apart at the seams, but he’d managed to keep most of his problems to himself … as far as his airline and military superiors knew, everything was fine.

In 1994, a FedEx pilot who was about to be fired for falsifying his previous flying experience decided to kill himself so that his family would benefit from a 2.5 million-dollar life insurance policy.  To make his suicide look like an accident, he planned to hijack and crash a FedEx plane.

He boarded a FedEx DC-10 bound from Memphis to San Jose as a deadheading passenger, carrying a guitar case loaded with hammers.  His plan was to disable the cockpit voice recorder, bludgeon the flight crew to death, then take control of the airplane and crash it.  He figured the crews’ hammer injuries would pass for crash-related injuries and that no one would ever be able to figure out what had actually happened.

He disabled the CVR by pulling a circuit breaker (unknown to him, however, a crew member noticed the popped CB and reset it).  Shortly after takeoff from Memphis he entered the flight deck and began bludgeoning the three-man crew.  Severely injured, the crew was somehow able to fight back and restrain their attacker.  After a harrowing descent, partially inverted at transonic speeds, the crew — two of them with fractured skulls and one partially paralyzed — were able to land the airplane back at Memphis.  The interior of the cockpit, they say, was literally covered in blood.

Have I scared the shit out of you yet? 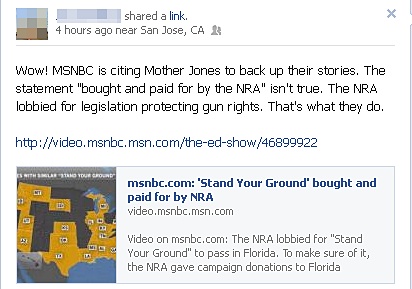 Mother Jones, like Rolling Stone, has become known for investigative reporting, taking over the heavy lifting now largely abandoned by major news outlets and media networks.  But I guess the disparaging reference to Mother Jones fits in with the right’s disdain for education and science, so no surprises there.

What got my attention was this part of my friend’s statement: “The NRA lobbied for legislation protecting gun rights.”  Really?  What gun rights are those?  In Florida, as in many states where similar ALEC and NRA-sponsored bills have been passed and enacted, there are more gun rights than you can shake a stick at.  You don’t need a permit to buy or carry rifles or shotguns.  You don’t have to register rifles, shotguns, or handguns.  You don’t have to have a license for rifles, shotguns, or handguns.  You do need a permit to carry a handgun, either openly or concealed … except if you’re in your own vehicle or home, in which case, what the hell, carry away.

And, as we now know, you don’t have any obligation to retreat when you perceive you’re threatened … you can stand your ground, and so long as you don’t shoot a white person you can fire with impunity.

How about the right for members of Occupy Wall Street or the New Black Panther Party to carry weapons at demonstrations?