I took a blogging break over the weekend.  A friend came to visit and we put him up on the Murphy bed in the home office, limiting our access to the computers.  Yeah, I could have done something with the iPad, but who has the patience to peck out an entire blog post with one finger, one letter at a time (never mind that damn auto-correct changing every other word you want to use)?  Not me.

Saturday my friend and I went to the Franklin Auto Museum in Tucson, a place I’ve long wanted to visit. It’s a great little museum, with about 24 cars and period artifacts on display.  I put up a short photoset at Flickr, but I’ll post one here:

If you look under the hood of most new cars, you’ll see some sort of decorative cover over the engine.  Carmakers, I had thought, only started doing that about 10 years ago.  But here was a mid-1930s Franklin V-12 with a nice-looking shroud over the engine.  What was up with that?  Turns out the shroud was both decorative and essential … Franklin engines were air-cooled and employed fans and ducting to keep the cylinders from overheating.  The shroud in the photo helps direct air to the rear cylinder heads, which otherwise would run hotter than the ones in front.  Your daily dose of gearhead trivia.

My air museum tour tomorrow will be my annual recertification, so I’ll be boning up on boneyard birds tonight.  Nothing like a checkride to keep you on your toes!

Number one daughter got a job!  She’s working full time at a gun shop, managing the inventory and associated documentation, a critical task for gun shops since their records are regularly inspected by the ATF … every gun, every serial number, has to be accounted for (except for the ones the ATF hands over to Mexican drug cartels, apparently).  Yes, it’s the same gun shop Donna works at, but wife and daughter swear that had nothing to do with Polly getting the job.  Me, I don’t mind a little nepotism.  Anyway, very good news for us, for Polly, and for domestic tranquility in general.  Not only that, they’re giving Polly flexible hours so she can work around her college classes.

Last week we had an 80-degree day.  It was so warm the ground squirrels came out of hibernation.  I declared winter over and immediately became obsessed with shaving off my beard.  That night I shaved the sides, leaving a mustache and goatee.  Not enough.  Off came the goatee.  Not enough.  Off came the mustache.  Not enough … but I stopped there (it was all I could do not to go after the eyebrows).  Donna says I look younger.  I think I look naked … but, you know, being naked feels good, and I can always grow another beard next winter.  Behold the new Paul, now with George Lucas Chin®: 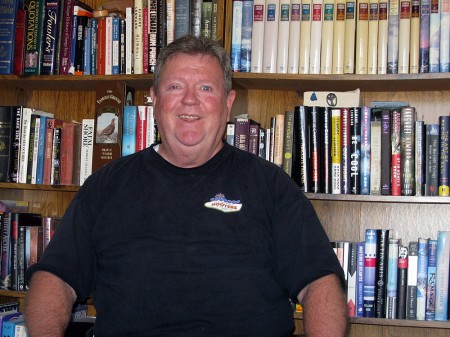 Much bicycling over the weekend: a short but hilly ride with friends Saturday morning and a 21+ mile ride with our bicycle hash group Sunday morning and afternoon.  I hope I may be forgiven for skipping last night’s weekly downtown walk … I was beat, but in a good way.

Donna leaves tomorrow to stay with Aunt Joyce in California.  Joyce fell and broke her hip.  She returns home from the hospital tomorrow, and Donna’s going to stay with her until she gets settled into her new routine.  Donna’s going to be away for 10 days.  Polly and I will be at each other’s throats … oh, wait, Polly has a job now … well, never mind then!

Garbage day at Casa Pablo is Tuesday. Sometimes when there’s a Monday holiday they slip our pickup to Wednesday … other times they don’t. Christmas & New Year’s were Monday holidays, but they came for the garbage on Tuesday as usual. Yesterday was Presidents’ Day, a minor-league Monday holiday at best, and they didn’t come Tuesday. We used to get a yearly pickup date calendar from Waste Management but haven’t received one for the past two years … so the garbage goes out every Monday night, and sometimes sits there for an extra day.  Is this too Andy Rooney for you?  I’m almost done.

Did you know that the name Presidents’ Day was never officially adopted by Congress?  The holiday is still Washington’s Birthday, and “Presidents’ Day” is just what everyone else calls it, including whoever made all the calendars in our house.  So I hope the asshole at CNN who wrote this mean-spirited article can find it in his heart to forgive Michelle Obama, who, like me, believed what she read on the calendar.

Enough about me … how about a couple of newsy links?

Looks like the right will soon be embracing pedophilia!  I can’t wait to hear how my Limbaugh-lovin’ Cape Girardeau in-laws are gonna come to terms with this … but I know they will!

Studios Allegedly Pull All Whitney Houston Titles from Netflix to ‘Make More Money off the DVD Sales.’ Oh, come on … can that possibly be true?  When I checked Netflix just now, the DVD of The Bodyguard was still available.

I think the Republican war on (women having) sex has officially become a witch hunt.  I’m so glad my generation was around for the sexual revolution … at least we could pretend, for a few years there, that we were all, like, grown up and free.  Girls, better brush off your copies of The Handmaid’s Tale.

I don’t know about you, but after all that, I need a photo of baby platypuses wearing fedoras to cheer me up.