Oh, scare-mongering media, what will you terrify us with next?

Well, what more can one say about that?  Really.  Brain-eating ameobae.  I’ll never put anything up my nose again.  Not even a finger. 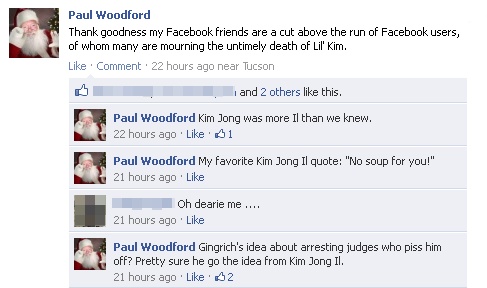 Anent the Dear Leader’s demise, I couldn’t help making a few jokes, but I’m saddened to see so many of my fellow netizens making fun of the North Koreans weeping over Kim’s death in that video going around.  Those poor people have no choice in the matter.  They’re crying for their careers, their families and loved ones, their very lives.  We have no fucking idea what it is to live in a dictatorship.

By now, probably, most of you have seen the story about the small-time politician who called for the assassination of Obama and his family on Facebook. I won’t repeat his statement here, but you can read it at the link (be warned, it’s bad, and I almost didn’t include the link).

Surprisingly, though he’s taken down the assassination post his Facebook profile remains wide open.  Normally I blur out Facebook users’ faces and names, but this asshole is so proud of himself I decided to leave the following screen grab intact.  It’s a post about the aftermath of his call for Obama’s assassination: 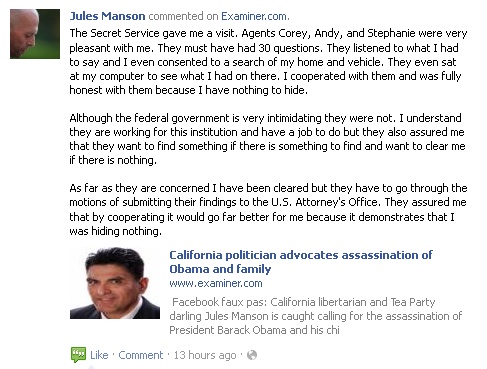 It’s good to know the Secret Service is on it.  They have to be working overtime, what with a mixed-race president in the White House and legions of mouth-breathing cretins at large in the land.  I absolutely love the part in this follow-on post where Mr. Manson (no doubt a close relative of Charlie’s) says he thinks the Secret Service will go easy on him because he cooperated.  Right.  That’ll be the right there on the cover page of the indictment, just below “Subject openly advocated the assassination of the President and his children.”

Oh, and examiner.com?  Calling what this twat said on Facebook a “faux pas” is like calling the North Korean famine the “Dear Leader Diet.”

Not strictly Facebook-related but close: I closed my Diaspora account yesterday.  Only four Facebook friends were on Diaspora; over a span of two months not one of them posted anything.  I didn’t do much better.

Google+ is a different story.  Although only a few of my Facebook friends also use G+, they post there, and what they put on G+ is of a different nature than what they put on Facebook, more in the nature of commentary on ideas, books, and current events.  It’s altogether a more intellectual place.  I follow several authors and popular bloggers on G+ and a few of them follow my posts in return.  G+ is a keeper, but it won’t be replacing Facebook anytime soon, at least as a place to keep in touch with friends and relatives.

Twitter?  I check in a couple of times every day, frequently catching breaking stories hours before the big-name blogs and news sites pick up on them.  It’s where I first learned of Kim Jong-Il’s death, and the killing of Osama bin Laden.  Very useful, often quite fun.

Social media?  Count me in.  Except for Diaspora.