I just ended the longest no-flats streak I’ve had since taking up bicycling again a few years ago. The culprit:  the dreaded goathead, a thorn that detaches itself from the devil tree it grows on and then, through some kind of plant/asphalt magnetism, migrates unerringly to the nearest bicycle path.

What amazed me, once I had taken the tire off the rear rim, was that the goathead was entirely inside the tire, big end and all, where it had penetrated both the “thornproof” protective strip and the tube.  The damn thing was half an inch long, and the big end was at least an eighth of an inch thick.  How did that get through the tire without leaving a big hole?

Fortunately, I’ve gotten pretty good at roadside repairs, so the job was done in record time and I finished my ride in a good mood.  If past experience is any guide, though, this signals the start of another flat tire streak, so I’d better make sure to keep my little tool pouch supplied with tubes and compressed air cylinders.

I mentioned the goathead puncture on Facebook, where a friend asked about the term.  I guess the thorn is supposed to look like a goat, but you could have fooled me.  I see no resemblance, do you?  But that’s what they call ’em around here.  Goatheads.

Speaking of Facebook, last night a friend posted a link to a news article about the Seattle police pepper-spraying a pregnant teen and an elderly woman, almost immediately attracting the attention of an authoritarian.  I started to respond and then pulled back: 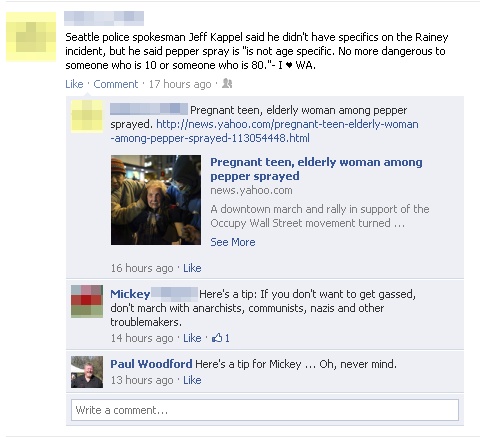 What I wanted to say was “Here’s a tip for Mickey: go fuck yourself.”

People like Mickey will always do as they’re told and truckle to authority.  No doubt he thinks of himself as a good American, but you know he’d have been a British loyalist during the American revolution.  If they’d had the words “communists” and “nazis” back in the 1770s, that’s what authoritarians would’ve called Ben Franklin and the gang, the anarchists and troublemakers of their day.

Well, here’s to troublemakers!  They keep us on our toes, and remind us that America can do better.