If asked, I’d say Donna and I would rather cook with gas. When we remodeled our kitchen three years ago we looked into putting in a gas range and oven, but the cost of running a pipe into the kitchen was prohibitive. Our old kitchen was electric and so is our new one. We’re fine with that. Wouldn’t it be nice, though, if the heat would instantly stop when we turn off our electric burners?

Electric ranges are getting there, they say, especially induction ones. So if environmental and pubic health agencies have good reasons to encourage manufacturers and consumers to switch to electric, I’m not going to feel like my rights are being violated.

God, what if cars and trucks still came without seat belts and air bags and someone leaked a government study about maybe perhaps some day in the undefined future asking manufacturers to add them? The banshee shriek from Congress, the media, and mouth-breathing reactionaries would topple forests and generate tsunamis. Why not force gay European metrics down our throats while you’re at it, you jackbooted federal thugs?

As you know, I’ve gotten into wristwatches. What was once a couple of old watches in a drawer is now a collection in a display case. At the risk of deepening my addiction, I joined r/watches, where I’ve learned a lot about not only watches but obsessive behavior in general.

Some of the practical lessons I’ve absorbed: how to remove and install metal bracelet links to make them fit better; how to correct the loss or gain of a few seconds a day by laying a mechanical watch down vertically or horizontally overnight; how to install a new strap (the buckle end attaches to the 12 o’clock side of the case).

Spiritually, I’ve learned that, as in life, I’m with the working man: you can have your Rolexes; I’m Team Seiko.

I’ve also learned to tell the difference between sincere and idle requests for help in identifying watches. Posts like these flood r/watches:

The first request seems sincere. The poster makes the minimal effort of identifying the brand, providing a decent photograph, and stating his reason for asking. The second request? Fucker doesn’t even say please. And that photo, probably taken with a cell phone camera aimed at a TV screen? It could be anything. There are literally hundreds of watches that look like that.

I left a snarky comment on the second post and quickly learned a lesson on getting along with my fellow watch fanatics. Turns out watch nerds love a challenge, the tougher the better. It’s their version of Wordle! Who cares whether the poster has a genuine interest in identifying a watch or is just a shitbag looking for attention? It’s about giving people something to do!

Personally, I think it’s an Omega Seamaster chronograph, but I’m not playing. I will admit, though, that since I’ve gotten into watches, both Donna and I have started noticing them when they poke out from the sleeves of actors on TV and the movies, even when they’re obviously product placement … like in this home-made poster for cheap Timex quartz watches, featuring yours truly and Mister B, the Wonder Dog. 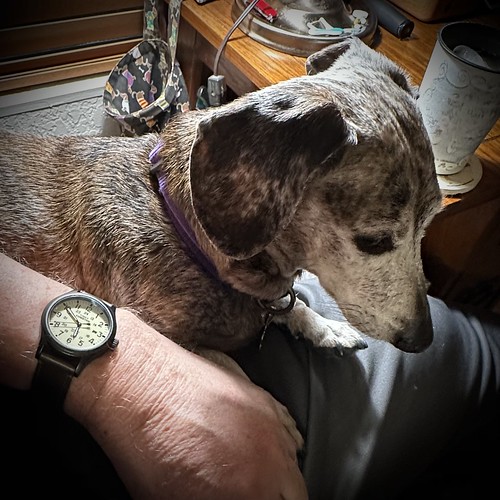 One thought on “Cookin’ with Gas”