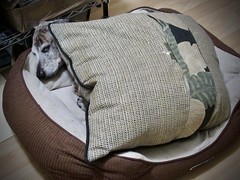 Mr. B, our 14-year-old dachshund, is recovering from extensive dental surgery. Extensive and expensive. They pulled 12 teeth and drained more than one abscess. He was at the animal hospital yesterday from 7 a.m. to 5:30 p.m. and came home loopy with drugs. He’ll eat soft food for a week with antibiotics mixed in, and we have to force an oral syringe-administered painkiller down his throat each morning. He moaned and groaned all night as the drugs wore off, but he’s bouncing back this morning. He devoured breakfast and asked for more; that’s a fresh photo of Mr. B resting in the home office dog bed by my feet.

We knew he suffered from an abscess three weeks ago, but hoped the painkillers and antibiotics the vet prescribed for him then had put him back to rights. Apparently there were more we didn’t know about. Dogs try not to let you know when they’re in pain; we feel terrible we weren’t able to get him in sooner. But at least he’s all right now. Fritzi and Lulu need dental checkups and cleaning, but we’re going to have to save up before we can take care of them.

Just thinking out loud here … Germans use different words for eating when it comes to humans and animals. It’s essen for us; fressen for them. In English, though, it’s the same thing: we all eat, people and critters alike. I referred to Mr. B’s veterinarian just now; I really should have said “his doctor.”

I owe you a follow-up on the lawsuit a group of sexual assault victims brought against the Air Force in 2015, in which a fighter squadron’s unofficial songbook was introduced as evidence of an institutional culture that glorifies sexual violence, the suit I mentioned in an earlier post.

The fate of flying squadron songbooks? That’s fuzzier. There were other, earlier lawsuits against military services and service academies, some of them also citing songbooks, and one song in particular, “The S&M Man,” a song I once joined in on at fighter squadron and Hash House Harrier get-togethers but eventually quit singing because of the sexually violent nature of its lyrics, the exact same reason it’s been featured in lawsuits against the military.

The USAF apparently conducted a widespread purge of squadron songbooks in 2012, well prior to the 2015 lawsuit I blogged about, as referenced in a June 2018 academic paper titled “The Show Must Go On: Fighter Pilot Folksongs of the Vietnam War”:

The Air Force is in danger of throwing out the baby with the bath water. Productive and purposeful fighter pilot folksongs — like those discussed in this paper — have been intermingled with drinking songs since WWI. Bawdy drinking songs are no longer acceptable in modern Air Force culture for good reasons. In 2012, personnel issues at one fighter base exploded into a fire storm of bad publicity for the Air Force. Fighter squadrons were accused of harboring unprofessional materials and supporting a culture of excessive drinking and sexism. The result was a purging of squadron songbooks from Air Force units. Much of the material discarded was inappropriate and no one should mourn its journey to the shredder, but a substantial portion contained important history and culture. The 2012 purge extinguished much of the culture built around roll calls and song and explains why many fighter pilots think of fighter pilot songs as “those we can’t sing anymore.” This view does not appreciate the full body of work that are fighter pilot folksongs or the importance of this music to group cohesion and combat effectiveness.

Whether the songbook cited in the 2015 lawsuit was one of those purged in 2012 or one that somehow survived and was still in use is unknown, but I personally believe fighter pilots still sing and that squadron songbooks still exist, and will ask around in online fighter pilot forums for the inside scoop on current “Air Force culture.”