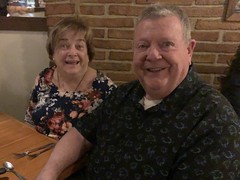 Donna and I celebrated our 57th wedding anniversary yesterday with gifts, a matinee, and dinner out.

The matinee was Devotion, the story of Navy pilots Jesse Brown and Tom Hudner in the Korean War. It’s both moving (and a true story at that) and realistic, far more so than either of the Top Gun movies … real airplanes, real flying, attention to detail, etc. It’s very like The Bridges at Toko-Ri, the 1954 classic based on the James Michener story of the same name, which I now think was a partial retelling (maybe more than partial) of the Jesse Brown/Tom Hudner story, Jesse’s color changed to white in deference to 1950s racists who wouldn’t have read the book or watched the movie otherwise.

Dinner? Prime rib at Jonathan’s Cork, a Tucson institution. Rare for Donna, medium rare for me. All in a, a most satisfying anniversary, and as I said on Facebook and Instagram (and Mastodon, and Twitter, good lord where will it stop?), who’d a thunk we’d still be together after all these years? 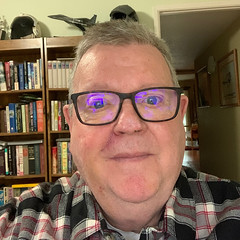 You can barely see my stitches in the dinner photo, above, but they’re more visible in this one, taken just now. Also more apparent is my swollen right cheek, which I can only blame on myself for not being more diligent with ice packs. The stitches, which follow my smile line, come out Monday, one week after Mohs surgery. I think the scar will be almost invisible after a few weeks … so long as I keep smiling, that is!

Long as I’m loading this post up with photos, here are our pups, whom (do dogs get the “whom” treatment, or are they just “whos”?) we’ve decided to leave home for Christmas. We’re driving to Las Vegas to spend the holiday with our son, daughter-in-law, and grandchildren, leaving Mr. B, Fritzi, and Lulu home in the care of our daughter Polly. Polly works unpredictable hours at Safeway, so our friend Mary Anne has agreed to feed them at their accustomed times when Polly can’t, and to drop by for occasional canine welfare checks. It’ll be less stressful on the pups … and on us, as well. Mr. B, left; Fritzi & Lulu, right.

Last one: my modest collection of self-winding mechanical watches, arranged by age. 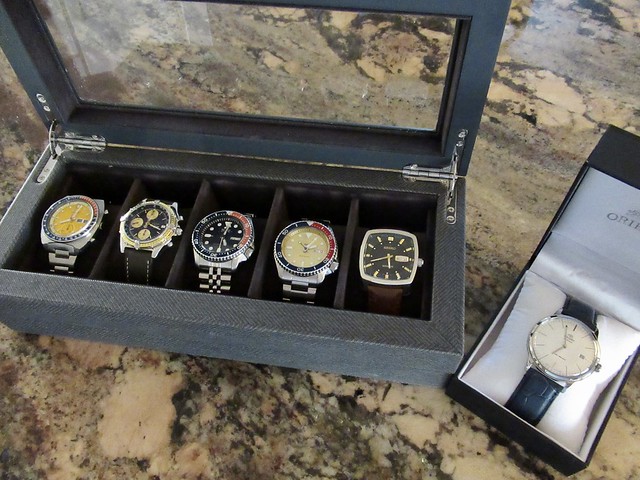 From left to right:

Damn it, maybe I do need a bigger display case!