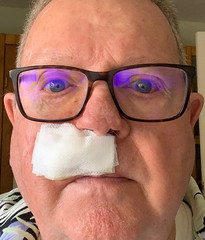 Donna and I survived mutual outpatient surgeries yesterday: she, cataracts removed from her left eye (her right eye was operated on earlier); me, a Mohs procedure on a basal cell carcinoma under my nose. This morning, Donna looks normal. I look like this.

I help Donna with eye drops. She still gets a drop a day in her right eye, operated on a month ago; for now she gets four drops daily in her left eye, the dosage tapering off over the next several weeks. She says each eye, after surgery, felt like she’d been peeling onions, but that went away after a few hours. The eye drops are unpleasant, though, and I feel for her.

My wrapping is temporary, of course: it comes off tomorrow and I’ll switch to regular strip bandaids. Looking forward to that, because this thick padding between my nose and mouth gets in the way of eating (and less pleasantly, blowing my nose), and I can’t slurp coffee lest it stain the gauze and look even more ghastly. The stitches come out next Monday.

This must be at least the 18th skin cancer I’ve had removed, each one somewhere on my face, and my third Mohs procedure. Donna’s had four or five (and one Mohs), our kids one each. 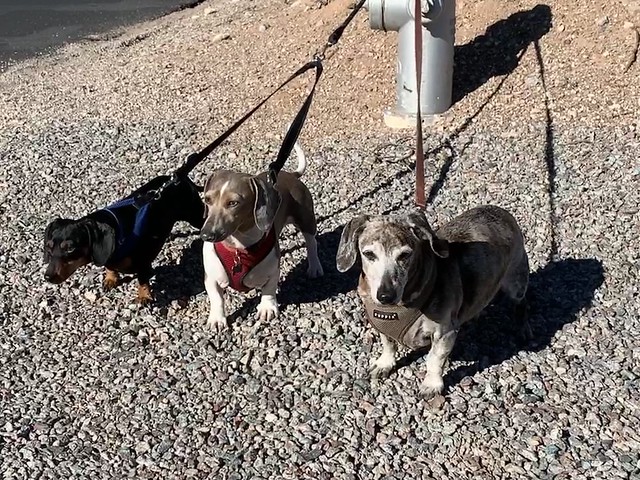 Of our three dachshunds, Fritzi (the one in the middle) is the natural nurse. She knows when anything’s wrong and jumps right up in your lap to comfort you. Lulu and Mister B know too, but they’re more the type to offer thoughts & prayers. Fritzi’s the one who gets off her ass and helps!

We’re all familiar with the Infinite Monkey Theorem, the fancy name for the idea that monkeys pecking away on typewriters, given enough time, will eventually duplicate the works of Shakespeare.

Well, here’s my theory, which I’m calling Paul’s Theorem, which is mine:

Humans, given enough time, will act out every Monty Python skit in real life.

This is my theory and it is mine, this theory of mine. This theory, that I have, that is to say, which is mine … is mine.

TIL (today I learned) that a tube of flavored Chapstick, placed in a drawer ten years ago and then forgotten, goes rancid. Not pleasant at all, and I had to scrub my lips almost raw to get rid of the taste and smell.

A few days ago, thanks to an old friend who posted to an F-15 Eagle group on Facebook, I learned I’ve been on the cover of Aviation Week & Space Technology — my world’s Rolling Stone — not once but twice.

Both photos were taken by Bob Williams, at the time McDonnell-Douglas Corporation’s official photographer, riding in a two-seater flying alongside. The first photoshoot occurred, I think, in 1981, when I flew with the 32nd Tactical Fighter Squadron at Soesterberg Air Base, the Netherlands. Steve Spencer flew lead and I was his wingie. Our backdrop was a mix of medieval cities, polders, canals, and the famous windmills at Kinderdijk. The second photoshoot was in Alaska in the summer of 1983. I led a four-ship over the glaciers and mountains north and east of Anchorage and Elmendorf Air Force Base. The photo that made the cover is of me solo, doing a zoom climb in front of Denali and the Ruth Glacier as my wingmen, Rick Pialet, Walt DeBord, and John Lasley, circle nearby. This one’s the screensaver on my iPhone and iPad, a real keeper.

Bob Williams and I recently got re-acquainted through the Facebook group I mentioned earlier. Glory days, those were, and I’m glad someone had the good sense to take photographs, because I sure didn’t … and I kick myself to this day.