You Can’t Read That! Banned Book Review: The Perks of Being a Wallflower 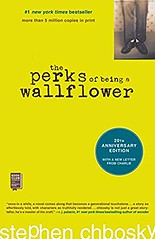 The Perks of Being a Wallflower
by Stephen Chbosky

In a recent banned book news roundup, I linked to an article about a Florida high school teacher who innocently picked up a young adult novel and was shocked by what she read:

“It was a book that I had never heard of before. When I pre-read this book, I found that it was full of questionable, age-inappropriate material, including a lot of oral sex, bestiality and things of that nature.”

The novel, of course, is “The Perks of Being a Wallflower,” frequently challenged, protested, placed on restricted reading lists, and sometimes banned since its publication in 1999. I’m neither a teacher nor a young adult, but I’ve heard of it. In fact I’ve been hearing about it for at least a decade and have long wanted to read it. The Florida teacher’s comment prompted me to finally get a copy.

The Marshall Libraries web site summarizes nearly two decades’ worth of attempts to restrict or ban the book. Note that these are just the attempts that made the news, and that most local fights over banning or restricting books go unreported. What do opponents object to? A partial list includes:

Protesters at school board meetings regularly describe the novel as disgusting trash, and as book-banning rhetoric ramps up, as child pornography, part of a leftist plot to lure children into lives of depravity, addiction, deviant sex, and transgenderism. One grandmother stood up at a school board meeting to say she worried boys would read the date rape scene and try to re-create it with her granddaughter! Talk about grooming! Bad stuff indeed!

How bad is it? Here’s a brief snippet:

To set the scene, Patrick and the narrator Charlie are driving in a car, swapping tales about legendary high school characters of the past. Barry the vandal. Chip the bug killer. C.B. the wanna-be dog fucker. Action Jack the jack-off. Patrick, openly gay, is himself on the path of becoming a legend to future students. So is Charlie, who’s regarded by most of his classmates as a weirdo.

If you’re the kind of person who gets aroused by any of this, I don’t think I want to know you. And just to be clear, the short reference to C.B.’s drunken attempt to fuck a dog is the full extent of the bestiality so often cited by people who haven’t read the book. It’s always that way: a character in a young adult novel so much as mentions or has a thought about a thing and as far as book-banners are concerned the entire book is about that thing.

Not that there isn’t plenty of shit going on in “The Perks of Being a Wallflower.” Charlie, a high school freshman who comes across as intelligent, observant, oddly passive, and perhaps slightly autistic — the wallflower of the title — falls in with a group of seniors and spends the school year learning from and doing things with them: socializing, driving around, drinking, smoking tobacco and weed, having sex (which Charlie merely observes until late in the book, and then not fully due to being sexually abused in his pre-teen years).

So yeah, there’s drinking and drug use and sex, like in pretty much every young adult novel. Charlie’s older sister gets pregnant and he takes her to the abortion clinic. Someone gives Charlie LSD at a party and he has an unpleasant trip. Early in the book, Charlie watches as his sister’s boyfriend forces her to have sex, only later realizing it was rape. Patrick, openly gay, has a secret homosexual relationship with the closeted quarterback of the football team. The girl Charlie loves, Patrick’s step-sister Sam, eventually tries to stamp his passport, but that’s when Charlie’s repressed memories of Aunt Helene abusing him as a child come flooding back and he suffers a breakdown.

What do middle- and high-school kids talk and think about? I’m betting it isn’t Jesus and saving themselves for marriage. What kind of books do young adults read? What kind of shenanigans do they get up to?

All the things the kids in this book think about and get up to. And you know it. We’ve all been there.

“The Perks of Being a Wallflower,” it seems to me, is well within the mainstream of contemporary young adult literature. It depicts the things kids are interested in without glorifying them. It’s message is a moral one, not preachy but realistic in depicting the consequences of drinking, drug use, promiscuity, and selfish behavior. It offers recognition, affirmation, and support to kids who’ve been the victims of child sexual abuse and incest (of which there are many, far more than we want to think about). And Charlie and (most of) his friends? They’re going to turn out all right. Like you did. Like I did. What was I reading when I was 14? Jack Kerouac’s “On the Road,” one of the many adult books Charlie’s English teacher, Bill, challenges him with.

Which all goes to explain the popularity of “The Perks of Being a Wallflower.” Ban away, teabaggers, homophobes, frightened grandmothers, and bluenoses, kids aren’t going to stop reading it, nor should they.

7 thoughts on “You Can’t Read That! Banned Book Review: The Perks of Being a Wallflower”