You Can’t Read That! is a periodic post about book banning, featuring news and opinion roundups, personal observations, and reviews. 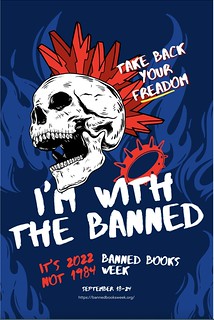 Every year those who want to ban books line up to tell us Banned Books Week is a hoax, claiming books aren’t banned in the USA. In the years I’ve been writing these YCRT! posts, more than one reader has called me a liar for saying books are banned. Here’s my response:

I find I have to explain my use of the word “banned” every now and again. My position is this: any time people try to keep people from reading a book, they’re trying to ban it.

Regardless of whether the same books are available on-line or in bookstores, the intent of those who call for their banning is to keep others — kids at first, but eventually adults as well — from reading them. This is the very definition of banning.

The government no longer bans books at the national level, but it used to. Henry Miller’s novel Tropic of Cancer, for example, was banned in the USA from its publication in 1934 until the Supreme Court overruled the ban in 1964. Even during the days when it and other books were literally banned in the USA, though, conservatives advanced the argument that such books weren’t really banned, because you could always board an ocean liner, sail to Paris, and buy copies there. Conservatives today recycle the same argument: you can buy “Gender Queer” and “All Boys Aren’t Blue” from Amazon, so what’s the problem with removing them from the children’s section of the library?

Book banners want to control what we read. They may no longer be able to ban books nationwide, but they’ll do whatever they can to get books they disapprove of banned from libraries, bookstores, and classrooms. Sometimes they succeed, and banned books are the result. Ban, banned, banning: these are the correct words, and that is why I use them.

Yes, Virginia, books are banned in the USA. It happens all the time, and if you haven’t heard, now more than ever. When people quit trying to prevent me or my children from reading books they don’t like, I’ll quit using the word, but not until then.

More on Mr. McBreairty and the “concerned parents” with whom he associates (be sure to click on “Read the full conversation on Twitter) — Paul

Yet few teachers own classroom sets of Maia Kobabe’s “Gender Queer” or Alex Gino’s “George,” a fact guided by curricular standards, textbook economics and teachers’ frequent discomfort at teaching texts. Instead, the most frequently challenged books are ones that students are reading on their own accord, even if they are accessing them through a school or classroom library. Bans are targeting books that young Americans want to read, not texts that a teacher tells them they must.

There have always been book challenges, controversial titles, and fights over inclusive collections. But in the last year, school librarians have faced a bigger, broader, more coordinated, and hate-filled censorship campaign as politics and the country’s divisive culture wars have moved into school libraries. With an impact on books on the shelves and future collection development decisions across the country, librarians are sharing their stories …

N.J. Librarian Who Fought Book Banning Co-creates App to Help Others Do the Same (NJ.com)

New Jersey librarian Martha Hickson, who gained notoriety last year after fighting against the banning of five books from her school’s library, has helped create a collection of step-by-step guides to help others around the country do the same.

Following the fuss over the PEN listing and the Oklahoman article, the Bristow schools superintendent told a local TV station — which forgot to include the superintendent’s name — that the listing was “fake news,” since The Outsiders is still available in the one classroom, for eighth-graders, so it’s not “banned,” don’t you see? It’s simply restricted so it’s age-appropriate. That explanation didn’t fly with PEN America’s senior manager of free expression and education, Jeremy Young, who said however you define it, taking a book out of a library and restricting access to it is a ban: “You can put a book on the top of the spire of the clock tower and tell students that they’re not allowed to take it down and claim that book has not been banned because it’s still technically on school grounds.”

Amid Book Bans, Virginia Parents Push for More ‘Authority’ Over What Kids Can Read in School Libraries (ABC News)

Anderson, a Republican who represents parts of the cities of Norfolk and Virginia Beach, said that he plans to introduce a bill that would identify titles that contain “sexual content” and implement a rating system for library books that would essentially be based on the Motion Picture Association film rating system. Books would be marked with “Parental Advisory Warning” labels and parents would be able to opt their children out of reading books with a particular rating.

This is called “red-flagging,” another form of banning books. Here’s why it’s wrong and won’t work. — Paul

A Hong Kong judge has found five speech therapists guilty of publishing seditious children’s books. Their books — about sheep trying to hold back wolves from their village — were interpreted by authorities as having an overtly political message. After a two-month trial a government-picked national security judge said their “seditious intention” was clear.

Livingston Parish President Layton Ricks will be sending a letter to officials at the parish library to reclassify certain books that contain ‘questionable sexual content.’ This comes after a book called “Dating and Sex: A Guide for the 21st Century Teen Boy” was apparently discovered in the young adult section of a public library in Livingston Parish, prompting concern from parents and other organizations.

Our books, the books that are being banned — these books are like the glasses my daughter and I wear. Just like when I looked at a tree and saw every leaf, these books help kids look at their community and see every human. These books, when read and shared, can give kids a clear, true view of the world all around us.

A Virginia Beach Circuit Court judge on Tuesday dismissed an effort to declare two books obscene and unfit for children. Judge Pamela Baskervill found that “Gender Queer: A Memoir” by Maia Kobabe and “A Court of Mist and Fury” by Sarah J. Maas are not obscene under state law.

School librarians across St. Louis tossed at least two dozen books this month, even as police said they would not enforce a new state law criminalizing explicit materials for students.

Heid had discussed at a July 26 work session both an opt-out process for library materials and a separate opt-in process for the 16 books, which touch on topics including transgender identity, homosexuality, child rape, underage sex, school shootings, racism, and, in two brief passages in one Toni Morrison book, beastiality.

The New York Post, that bastion of good sense and good taste, published an article this weekend titled “Librarians go radical as new woke policies take over: experts,” by one Dana Kennedy. As usual, it was a lot of bigoted whinging about how many librarians are leftists (and even admitted Marxists!) who have political and social opinions different from their own and general confusion about how that is even legal. Like every other treatise on this subject, she really could have just written “I am worried that books will turn my child into a transgender communist!” and called it a day.

Public radio being public radio: not just two sides, but three. Who’s to say which is right? — Paul

“It’s Perfectly Normal” was published in 1994 and has been updated since then, most recently last year. Superintendent Clay Gleason said the book has only been checked out a couple of times. The book cover states it is “for age 10 and up,” and the introduction says it was written to help kids answer questions about their bodies and sex.

This reporting makes it seem like most parents want limitations and full control to micromanage their kids. This is not true- especially at the HS level where most of these books are! https://t.co/SdTXNcc6f8

Take a moment today to look at @TasslynM‘s incredibly comprehensive database of all the current attacks on books. Don’t miss the tabs at the bottom. Dr. M has broken down challenges by book, district, school, groups making the challenges, and more. https://t.co/4khwuvy3xh